A few notes about spiritual warfare.

One may observe that there are overt manifestations of evil (as is apparent in the second part of this hodgepodge), as well as very subtle ones: whereby spirits are well under our radar. Call it “the witchery of paltry things” (Wisdom 4:12).

Might an example, at least at times, be rude drivers, who seem in great abundance these days?

Notes one deliverance expert, “A driver cuts in front of you without a signal, you have to hit the brakes — what you don’t know is that the driver has ‘company’ — a demonic force which sensed your anointing — and then instructed the driver under its influence to drive in an insane manner.” Perhaps worth contemplation.

Another covert indication may come in the way of what is unkempt.

“Have you ever noticed houses that have experienced ‘desolation’?” asked this same fellow. “Homes with weeds in the backyard, and boards on the windows? Chipped pink flamingos on the front lawn? People sitting on the porch who look like extras from ‘Night of the Undead’ — evil pouring forth from demonic assignments that you can see?

“Demonic powers are localized regionally and become familiar with the cultural acceptance in your area,” he avers. “Just ride through different neighborhoods in your city and view the demonic oppression of people, homes, lawns, and vehicles.”

And there are the much more overt displays of demonism.

A recent show on the Travel Channel showed this dramatically. In re-enactments for a series called “A Haunting” (on Destination America), a family of three is seen horribly plagued by a demonic entity that has even killed farm animals and began possessing the man of the house. There were terrifying noises. An evil spirit calls their little girl’s name. Lights go off. This is a true story. Doors slam in the barn. When, in desperation, they call for a local priest, a young cleric who looks like he just graduated from seminary arrives, assures them that’s it’s all just floorboards creaking or something else rational, but nonetheless begins sprinkling a little Holy Water — fleeing when, while sprinkling that sacramental, the demon manifests near a door as a putrid odor and causes a force to all but knock down the inexperienced cleric, who, terrified, and looking like a deer caught in the headlights, then bids a quick good-bye, tells them to use Holy Water at night (especially on the daughter), and hurries off, leaving them to battle the entity on their own. 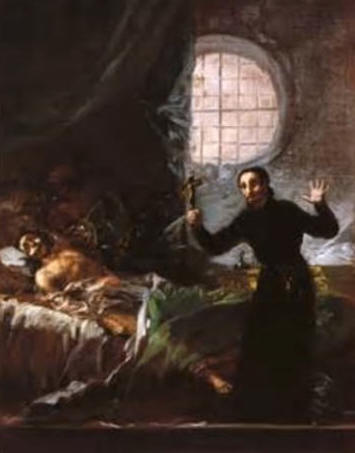 This is all confusing because Jesus not only is frequently portrayed — in Mass readings — casting out “unclean” spirits (before healings could take place), but also in light of the fact that after His resurrection, the Good Lord told His disciples: “These signs will accompany those who have believed: in My name they will cast out demons…” (Mark 16:15-17). Meanwhile, in another episode, a fierce devil is successfully cast out by an evangelical-type who simply commands the spirit to leave. End of account. Case closed.

It doesn’t get much clearer than that.

Notes a post by a California abbot on blogsite called Word Incarnate:

“We can be ‘bewitched’ by paltry things, by passing fads, foolish pleasures, or corruptible goods. Such things ‘obscure what is right.’ It seems like the advertising and entertainment industries see it as their task to bewitch us with paltry things, for if we could see clearly what is right, most of them would go out of business.

I often have rather weird dreams, and not long ago I had one that made me think of the above passage from Wisdom. I had come across a large serpent, which was quite unfriendly to me, and I engaged in battle with it, seemingly defeating it. But it somehow recovered from the wounds I inflicted upon it, and then it transformed itself into the image of a witchy-looking woman. I remarked (to no one in particular) that such an image wasn’t the least bit attractive to me. Then the demon revealed its tactic: ‘I can appear in any form that pleases you.’ Suddenly, a priest who had been at the monastery many years ago, and who had subsequently renounced his priesthood, was standing next to me, and he followed after the image, which was evidently appearing in some form pleasing to him. I tried to warn him, but he went after it anyway…

“So I learned a little something about the way idols and temptations beguile us. The witchery of the pleasing appearance obscures the reality of the evil behind it, and thus obscures our perception of what is good. We tend to forget that one of the effects of original sin is a vulnerability to deception, an inclination toward concupiscence, and a general tendency to take the path of least resistance, or the path that seems to promise some immediate and tangible benefit. Deceit beguiles our souls, and if we follow after the demonic chameleon, wickedness will eventually pervert our minds, and the serpent will have his victory.

“That is why St Paul urges us to put on the armor of God (Ephesians 6) and in many other places we are urged to be awake, sober, alert, able to discern the spirits, to distinguish between the true and the false, the authentic and the spurious, reality and illusion. It is in our best interests, to say the least, to be able to recognize paltry things for what they are, and to dismiss them in favor of what is really good, true, and beautiful, that is, what lasts forever, what is of God. There is a terrible price to pay for mindlessly following what superficially seems pleasing or attractive. Bewitched by paltry things, you could be playing the devil’s game. And everyone who plays that game ends up a loser.”

Our true destiny is to win.