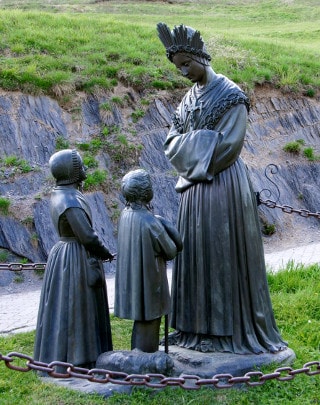 We carried an article a while back on former professor Roy Schoeman, a Jew who was flirting with atheism and pleading for guidance when he received an unexpected answer to a prayer: the Blessed Mother, arrayed with ineffable splendor.

We think of her in a special way during this week of recalling Lourdes in France (feast day September 19).

That occurred, most interestingly — his encounter — following a strange supernatural experience while “walking in nature” — sorting out despair — and spending a year asking God to reveal Who the true God — the truest religion — was. He didn’t expect nor (as a Jew) want a Christian answer!

But there was the Blessed Mother, a year to the day. (You can read more of his story and view a video at the bottom.)

So began, did the conversion of Roy Schoeman, soon after he had reached a point when — despite stellar academic achievements (he attended M.I.T. undergrad, and became a Harvard professor at 29) — life had lost most semblance of meaning. Although raised a Jew, he no longer believed in the Bible or God.

Stressed and distressed — wandering one morning through the peacefulness of Cape Cod, where dunes conjoin brush — he received without warning “the most spectacular Grace,” as he puts it. “The ‘curtain’ between earth and Heaven disappeared, and I found myself in the Presence of God and like a very intimate conversation with God: seeing my life and experiencing my life as I would see it after I died and looked back over it in the Presence of God.  And I saw instantaneously how I would feel about everything after I died.”

One of two major things Roy Schoeman, now a full-time Catholic evangelist, was shown: how much time he had wasted lamenting how little he was loved, when in fact God’s Love was there all around him. He also saw, in stark relief, “all the time I had wasted doing things that would be of no value in the eyes of Heaven.”

We caught up with Roy last week — he now lives with his wife, a professor, in Florida — and he filled in some blanks. To wit:

What has he been doing, since leaving Harvard back in the mid-1980s?

d us he has taught as an adjunct at a seminary as well as Salem State and Ave Maria University; hosts a weekly radio show; writes books; and gives parish missions. Among his works has been a compilation of Jewish-Catholic testimonies.

Has he had mystical experiences since the appearance of the Madonna more than three decades ago — which turned him sharply in the direction of Catholicism?

They have continued to a degree, he explains, though they have tapered off — a “gradual decline” after his conversion. As Roy puts it, an “extraordinary supernatural prayer life” became a more “normal supernatural” one, for all prayer is supernatural.

Speaking during a week that saw that “zeitgeist” highlighted by the issue of abortion (with remarkable developments from New York to Virginia to the Supreme Court), Schoeman points out that the most efficacious sources of power for the devil to use historically are derived from human sacrifice, “particularly child sacrifice, and most specifically parents sacrificing their own children.

“And then also sexual perversion.

“These are the two things he’s always had as his primary sources of power and obviously if you look around at our society you can understand why [Satan] has so much power these days.” Never in the history of Christianity have those two things been embraced so wholeheartedly by the prevailing culture and even the legal structure, he points out.

As for the Church and the crisis it currently faces, Schoeman says it has never swayed him in the least away from Catholicism, realizing, as he puts it, that every priest has a “target on his back” (is a “prize” every time the devil can get one to fall) and Satan’s “heaviest artillery” is aimed at the True Church.

When Schoeman converted, few of his Harvard colleagues knew what had happened to him. One who did — a fellow faculty member who had been especially close to him — began to back away. “It was really hurtful,” says Schoeman. “I could tell from his reaction that he thought I had just gone insane. I don’t remember telling other faculty members. I think it got around because my behavior certainly changed. I actually don’t know how much they said among themselves. I acted kind of nutty because I was in that honeymoon phase of what they warn you about, acting like a moonstruck sixteen-year-old whenever Jesus was mentioned.”

Why would a non-believing Jew — who decidedly didn’t want a Christian answer to what religion he should follow — encounter the Blessed Mother?

“I’m sure the reason I saw her was to get me over my resistance to Christianity because Jesus was a threatening figure to me as a Jew, but no one could think of the Virgin Mary as a threat,” he says. “That was a very wise way of bringing me over the hump to believing Christianity and the Catholic Church.”

Early in his conversion — even before formal baptism as a Catholic — Roy found himself at a place he would later visit many times: the apparition south of Grenoble in France called LaSalette, where Mary appeared to two shepherd children in 1846, a dozen years before Lourdes.

Schoeman was in Europe to ski and had intended to stop at LaSalette — nearly 10,000 feet up in the French Alps — for the afternoon when a blizzard howled through, dumping snow at a rate of three feet a day. The road up that mountain, we know from personal experience, is daunting even in good weather.

There already was ten feet of snow on the ground. It was late January when he had driven up there, and the road was now closed — for about a week. The point: Roy couldn’t get off the mountain. 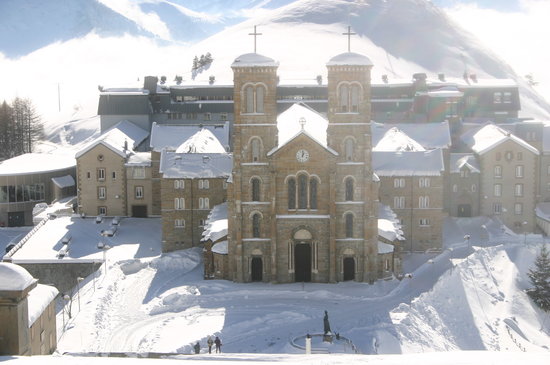 “What I had intended as a ski trip to the Alps was ruined,” he recalls. “I was stuck at LaSalette. When I finally got off the mountain I was just in time to go to Geneva to catch my flight home the next morning.

“So I’m sleeping overnight in Geneva and before I go to sleep I said a prayer — really a complaint to God. I said to Him, ‘I can’t believe You did this to me! I went halfway around the world to go skiing — it would have been the best skiing of my life, three feet of snow falling every day, and you would not let me go skiing! You kept me trapped at LaSalette the whole time.’

“With that complaint,” continues Schoeman, “I went to sleep and had an extremely vivid waking-feeling dream in which I was confronted by a man who was quite severe but that I knew was actually extremely loving. Sometimes one has a high school teacher who is stricter than any of the ‘happy’ teachers but who actually loves more than the happy-happy teachers. It was like that.

“He drilled me with his eyes and he said, ‘You can go skiing, or you can work for the Second Coming. It’s your choice. Which do you choose?’

“Afterward I felt about two inches tall and ever since then I’ve had the very strong sense that what happened to me has to do with the Second Coming, that we know dogmatically that there has to be a conversion of the Jews before the Second Coming can happen.

“I didn’t know what this meant for fifteen years after my conversion, but since I started my public ministry and wrote a book (Salvation Comes from the Jews), it’s clear that my ministry includes helping Jews enter the Church. And that it’s also encouraging a re-emergence of prayer for the conversion of Jews.”

Every subsequent winter for at least fifteen years, Schoeman journeyed to LaSalette (spending three to six weeks there at a time!).

Speaking of technology — which was the center of his life as an undergrad at M.I.T. — Schoeman points out that in Jewish numeric schemata, “w.w.w.” (as in worldwide web) can mean “666.” 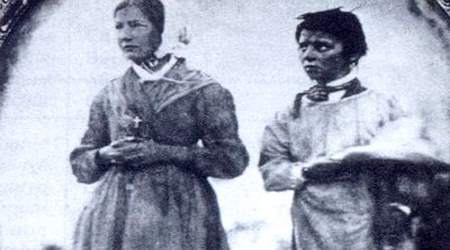 Interesting it is that at LaSalette, one of the seers, in writing down an unofficial (and controversial) part of what she was told by Mary, asked those around her how to spell the word “anti-christ” before sealing it in an envelope for the Pope [see our current “special report“].

The Hebrew and Greek alphabet does not have separate characters or alphabets for numbers and letters. Letters are also used as numbers. So each letter is a numerical value. The Hebrew equivalent of our “w” is the letter “vav” or “waw.” The numerical value of vav is 6. So the English “www” transliterated into Hebrew is “vav vav vav”, which numerically is 666.

Schoeman points out that the idea of control over a populace evokes technology such as the internet, through which so many purchases are now made, personal information is recorded, and people can be tracked to their precise locations. It offers a potential anti-christ control. Said an unofficial (and hotly disputed)  secret of LaSalette on the rise of the Antichrist: “Rome will lose the faith and become the seat of the antichrist… The Church will be eclipsed, the world will be in consternation… Behold the beast with his subjects, calling himself the savior of the world.”

As for other apocalypticism:

“I don’t know if it’s five years away or five hundred years away,” Schoeman says, of the Second Coming.

Nor do we — though signs of the times similar to those alleged at LaSalette seem all around us.