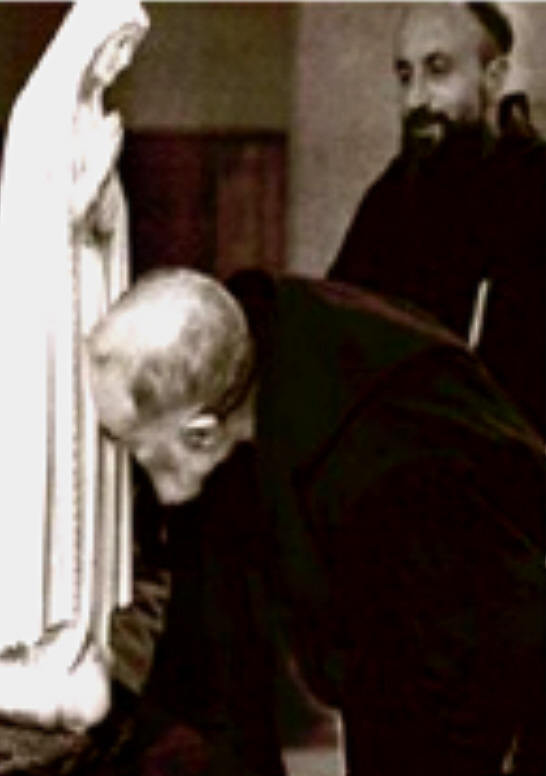 It’s another untold Padre Pio story, but with a major twist.

“In 1959,” recounts author C. Bernard Ruffin, “a Pilgrim Virgin Fatima statue visited Italy. At the same time of this visit, Padre Pio became seriously ill and was diagnosed with a fatal cancerous tumor. On August 6, 1959, the statue arrived at San Giovanni Rotundo. Padre Pio prayed before the statue and kissed Her feet. After the statue left the monastery by helicopter, Padre Pio said, ‘Oh Mother of mine, when you came to Italy you found me sick. You came to visit me here and I was suffering and now you have not delivered me from my illness.’

“As Padre Pio pleaded his prayer a miracle occurred.

“The helicopter flying high above the monastery with the statue circled the building three times. The pilot would later say that he could not explain why.

“At the same instant that the helicopter circled, Padre Pio felt a shudder immediately run through him. His body was penetrated with a ray of light and he felt the tumor gone.”

It was. When the doctors told him he had cancer, he had laughed. End of sickness.

That, however, is not the entirety of this story.

Untold until now is that the statue had been sent there — and elsewhere in Italy (to the provincial capitals) — as part of a year-long journey culminating in consecration of Italy to the Immaculate Heart in Catania, Italy. The priest behind it: Father Gabriele Amorth — the famous Rome exorcist.

As the exorcist explained, in a series of long interviews (released in a new and very interesting book, Father Amorth: My Battle Against Satan), “In 1958 and 1959 I dedicated myself to the consecration of Italy to the Immaculate Heart of Mary. Since I was the organizer, and I was already a spiritual son of Padre Pio, I arranged to have Our Lady go to him.

“On August 5, I wrote to the bishop of Benevento to cancel one of the two days there. He accepted my proposal, and thus I gained time to send the statue to Padre Pio at San Giovanni Rotundo.”

In fact, Father Amorth had often visited San Giovanni Rotundo and Padre Pio. His communication with the extraordinary stigmatic began in 1929 and lasted until Saint Pio’s death in 1968.

That meant he was under Pio’s protection — and more so, that of the Blessed Mother, to whom he dedicated his ministry, placing his whole heart in the faith of her protective mantle as he set about — with humor and a twinkle in his eyes — on many hundreds of exorcisms. During 1959 he had been involved setting up and then helping to operate three Marian institutes!

“I was aware that there was nothing I could do [by myself]!” said Amorth. “So I commend myself to Our Lady, asking in prayer: ‘Protect me under your mantle, and I shall be secure!’ Many times after, the devil said to me: ‘We can do nothing to you; you are too protected!’ And so I am; I am protected under the mantle of Our Lady!”

During exorcisms, devils also mentioned a “priest” who was present and disturbed them — an allusion, believed Father Amorth, to the added assistance of, yes: Saint Pio.

Intriguing it is that the incident with the statue occurred on August 5, which the Virgin allegedly said during appearances at Medjugorje was her actual birthday. Father Amorth would much later visit the apparition site, which he then proclaimed to be “the greatest current weapon” against evil.

When the original Fatima statue situated inside the chapel at Fatima itself was brought in 1984 to Rome for the consecration of the world to her, Father Amorth was also involved in this.

“We organizers were in the first row!” he recalled in the book. “I could have touched the Pope’s hand when, on his knees, he consecrated the world to the Immaculate Heart of Mary.

“Instead, I extended my arm and touched the statue!”

The words ring in our ears: “I am protected under the mantle of Our Lady!” said Father Amorth, who never experienced negative effects during exorcisms, living to the ripe age of 91.