When we left off [see previous story], I was saying how no geopolitical expert, no ambassador, and no intelligence agency predicted the fall of Communism in the U.S.S.R. was going to happen or even that it was possible.

By Christmas, 1991, the Union of Soviet Socialist Republics was falling apart, with freedom for heavily Marian 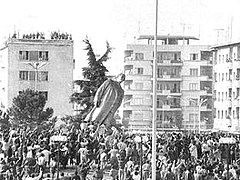 Ukraine. I was in Rome when Lech Walesa was elected president and vividly recall a large photograph on the front page of a newspaper that showed the victorious freedom fighter smiling, next to a Fatima statue. War—atomic war—had been averted. Communism, at least for now, had fallen. It was beyond astonishing.

But it had been a close call. “At these moments all humanity is hanging by a thread,” Mary had said in 1983 to Gladys Quiroga de Motta, a seer at the authenticated site of San Nicolás in Argentina. “If the thread breaks, many will be those who do not reach salvation. That is why I call you to reflection. Hurry because time is running out; there will be no room for those who delay in coming!”

“Today the Sacred Heart of Jesus is beside you to be your guide and to ward off the evil one who is attacking with all his fury,” added Mary in a subsequent message.

The enemy attacks “like a violent tempest,” she said, and “in all places . . .” Gladys had a vision in which she saw a street and found herself standing there as “some enormous monsters come toward me; it is like an avalanche. They are horrible, some like dinosaurs and others seem to be people, but very ugly, with large heads and ears. When they are very near me, there appears a blue wall and it is interposed between the monsters and me. Then I see the Virgin.” The wall, Mary explained, “is my protecting cloak. The Lord places me like a shield, like a guardian. “I will defend you, my children [she said].”

Already had “broken out,” said Mary, “a terrible tempest, the work of the devil (April 6, 1986). The enemy is challenging me pitilessly; he is tempting my children openly. It is a war between light and darkness, a constant persecution of my dear Church (May 22, 1986). “My children,” she said, “do not live in the easy way as is done these days, to the rhythms of madness, of violence, believing that man alone can provide himself with everything he may want,” added Mary on July 17 1984.

“All is falsehood, because it is a mistaken way of living.” “Pray for those lost souls [and] the materialism they want to impose on the weak—for the hollow world in which so many children fall and that offers nothing,” was the timeless message. She said two-thirds of the world was ”lost” and the remainder ”must make reparation”—extraordinary, sobering, if not shocking words. On March 21, 1988 she had said: ”I have a vision: I see the earth divided into two parts. One part represents two-thirds and the other one-third, in which I see the Blessed Virgin.

“She is with the Child and from her breast rays of light go towards the part that represents two-thirds of the earth. Immediately she says to me: ‘Gladys, you are seeing the world half-destroyed. These rays of light are sent from my heart that wants to save as many hearts as it can. My heart is all powerful, but it can do nothing if hearts are unwilling. The means to save souls are prayer and conversion. Every soul must prepare so as not to be imprisoned eternally by darkness. Amen, Amen!’”

Meanwhile, at Cuapa, Nicaragua, in a nation that was still recovering from a devastating quake, Mary told a seer who would later enter seminary and become Father Bernardo Martinez, “Pray, pray, my son, for all the world. Pray the Rosary. Meditate on the mysteries. Listen to the Word of God spoken in them. Forgive each other. Make peace. Don’t ask for peace without making peace. Tell believers and nonbelievers that the world is threatened by grave dangers. “I ask the Lord to appease His justice, but if you don’t change you will hasten the arrival of a third world war,” she had added. Prayer fed her luminosity—her power to persuade Jesus, Who had intervened. No global disaster, at least for now. So the dire warnings, the threats, had worked: they had marshalled prayer. But for how long would this be the case?

And here’s another part of it all.

After she died, Sister Lucia it was revealed by her fellow nuns in Coimbra that in 1942 — decades after the third secret was shown to her — the Fatima seer had received a further “enlightenment” on what the image of the angel torching the earth (or ready to) meant.

The crisis with Russia — at least for now — is past.

But what of the earth’s axis?

Is it ready to shift or perhaps already shifting, very, very slowly, causing strange effects, including climate change and strange rumblings, around the world? 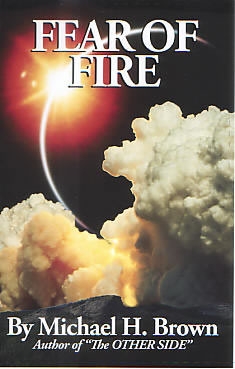