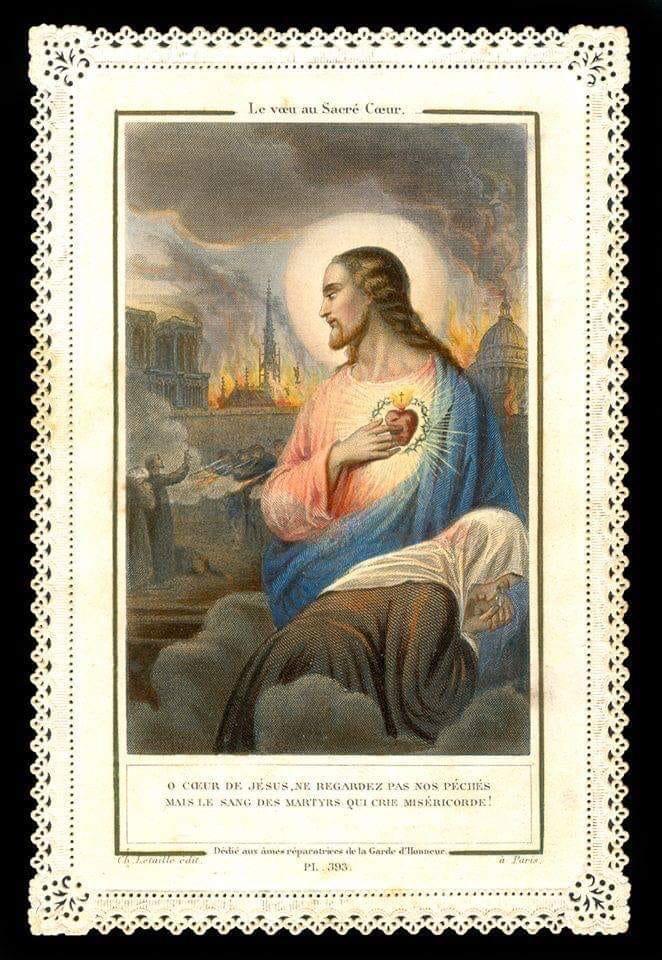 The holy card above, a viewer informs us, “is 129 years old. It’s imagery is based on approved prophecies given to seer Marie Julie Jahenny. Notre Dame engulfed in flames behind Jesus. The other church is St. Peter’s Basilica. Strange, don’t you think?”

If it’s that old (and it does look so), strange indeed — an example that prophecy can take more forms than straightforward locutions, apparitions, words of knowing, and visions.

A hundred and twenty-nine years ago is 1890 — indeed, the time during which Jahenny, a stigmatic from La Fraudais in France, was spewing forth dire prophecies.

In looking it up, we see that according to some bloggers, the building to the left of Notre Dame on the holy card may be Sainte-Chapelle [below], also in Paris, where the Crown of Thorns and other relics of the Crucifixion — later moved to Notre Dame — were once kept by royalty. If it is, the holy card represents a side of the royal complex of which it was a part, not the spires of the chapelle itself. 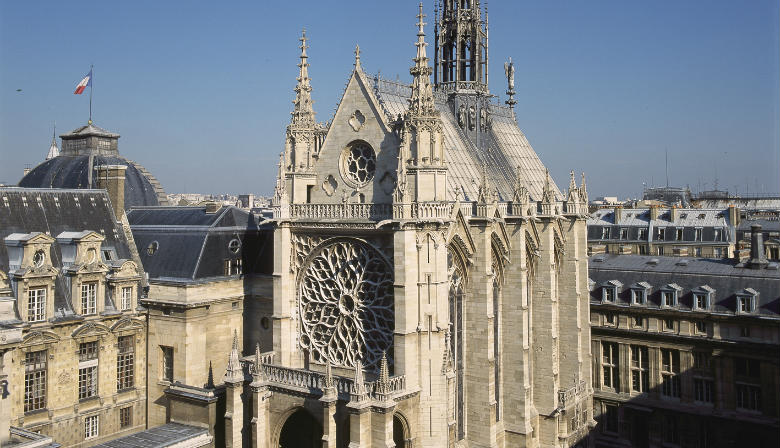 Artwork also seemed to foretell of 9/11, but let’s get back to the mystic Jahenny and her prophetic cri de cœur, which had often to do with the Church.

“In their (priests’) aberration, they will break their oaths,” she once quoted Heaven as telling her. “The Book of Life contains a list of names that ‘rends the heart.’

“Because of the little respect it has for the apostles of God, the flock grows careless and ceases to observe the laws. The priest himself is responsible for the lack of respect because he does not respect enough his holy ministry, and the place which he occupies in his sacred functions. The flock follows in the footsteps of its pastors; this is a great tragedy.

“The clergy will be severely punished on account of their inconceivable fickleness and great cowardice which is incompatible with their functions.

“A terrible chastisement has been provided for those who ascend every morning the steps of the Holy Sacrifice. I have not come on your altars to be tortured. I suffer a hundredfold more from such hearts than any of the others. I absolve you from your great sins, My children, but I cannot grant any pardon to these priests.” They were not exactly clement words.

“All the anger of the wicked is focused on the Holy See,” said Jahenny (December 8, 1874). “The chastisements will begin with Paris.” 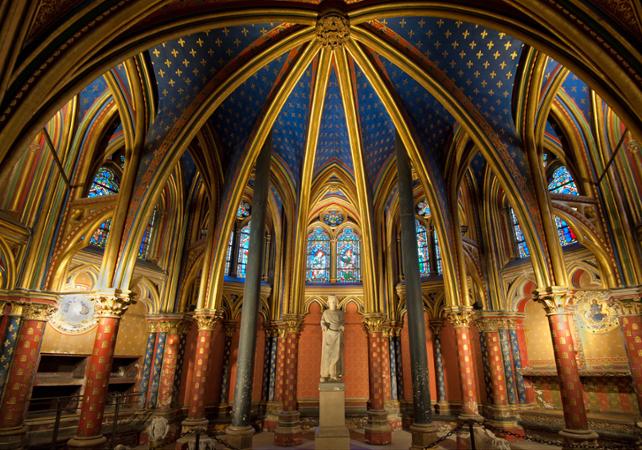 For France and Europe, many if not most of her prophecies materialized in the late 1800s and into the 1900s, including with the world wars. As a writer has pointed out, “On September 15, 1879, she predicted Bismarck’s ‘Kulturkampf’. September 15th, 1881, she foretold in detail the death of Melanie Calvat, the visionary of La Salette, which happened on December 15th, 1904. She predicted the eruption of Mount Pelé in Martinique, then described the horrific events as they occurred despite the fact she was half a world away. In 1881 she was shown the Transvaal War, announcing it would take place at the death of Queen Victoria, which happened in 1901. She predicted the death of the Count De Chambord, the last direct descendant of the Bourbon royal house of France. Just before the successor to Pope Leo XIII was chosen, she declared only a few days before the conclave the ‘Adriatic Cardinal is chosen by God, his reign will be that of Christ.  He will not last long and will be called Pius.’ She was correct in that Pius X did not last as long as the previous Pope named ‘Pius.’ Pius X, former cardinal of Venice, fulfilled the prophecy as ‘Adriatic Cardinal’ and was Pope for eleven years, while Pius IX reigned for over thirty-one years. 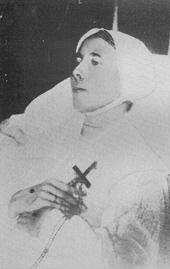 “Marie-Julie correctly announced beforehand the French would lose their colony of Algeria to the Arabs and the priests of that country would suffer horrible trials.  She also foresaw World War I and World War II.  Our Lord promised she would live to see the beginning of the chastisements, and she lived to see World War II.”

Are her prophecies thus complete?

Famously, she expanded upon prophecies of a terrifying “three days darkness” that would cover the world, prophecies that had begun with cloistered mystical French nuns a century before. Much of what she foresaw also echoed an alleged secret from LaSalette to Melanie.

In another text, dated November 1882, was a warning that the greatest attack to the Church before the chastisements would start when certain bishops demanded separating themselves from the Pope, creating a huge schism. That too has not yet occurred, though we may be seeing precursors of it. She constantly urged obedience to the Pontiff.

Chastisements common in the world would well up and succeed one another without ceasing, said Jahenny, who was confined to bed for much of her life. “The crisis will come on all of a sudden,” she once remarked, “and the Chastisement will be worldwide.”

Were the world wars truly global? Were they the Chastisement?

Or does something await in the wings for the future?

[Feedback (from the mail):

If you translate this from French, this article has to do with pious images which had a lot of ”lace design” (dentelle) attached to them, during a period in France from 1850 to 1914.  (I went in Yahoo writing ”Ch. Letaille, éditeur, France” (which is at the bottom left of the religious image) and this came up.  So the image in the article about Marie-Julie Jahenny is most certainly from that period…
It really makes you think…
Best regards,
Louise Mesbah]
ShareTweeteMail