In 2004, we published what some call a “word of knowledge” in the lineage of what we have labeled the “1990 Prophecy.” Every once in a while, the recipient passes along new such “words.” There have been just a handful, spaced over thirty years. They are in essence locutions or infusions of thoughts, presented for discernment only.

That “word” in 2004, among other things, contained a mysterious comment, one that still confounds us:

“Heed this too,” it said. “The politics of denial will be struck as with a plague.

“The smallest of what lives is precious in My sight.”

Was that referring to the denial of God, of Christ? The denial of brotherhood? The denial of help for the poor? Or something altogether different? And what might it mean that politics would be struck as with a “plague”? Is it saying the “politics of denial” would lead to the chastisement of a plague, or was “plague” just a metaphor for political troubles in general, perhaps upheaval? Might it relate to the incredible political effects the coronavirus is having (and will have)? Help us discern that abstruse phrase, “the politics of denial.” (The email for this is [email protected]).

Another part of the 2004 missive said: “The world is now seriously out of conformance with the Will of God and what He created and intended. There are those who would reconfigure the very creatures He has formed, and who meddle with the texture of life.

“For this reason, the Lord will allow a huge reorientation. If not for the action of Heaven, what God has created on earth will soon be damaged beyond recovery. A very dramatic effect already is in progress as regards the support structures of what man calls nature… The event to come will surprise everyone who has offered a prognostication, and will show even recalcitrant scientists, though not all, that there is a fundamental alarm in Heaven over their arrogant and wayward course. Nothing that is artificial in a way that disrupts what God intended will be allowed to stand.”

This is obviously not “tree-hugging.” Meditate — and pray — on those words. Has not the coronavirus come in a way no one expected? Are many now not saying they have reoriented their priorities? Do you not constantly hear the adjective “strange”?

Has it not surprised those who tried their hands at specific prognostication?

Though some foresaw epidemics, this is not your standard plague. 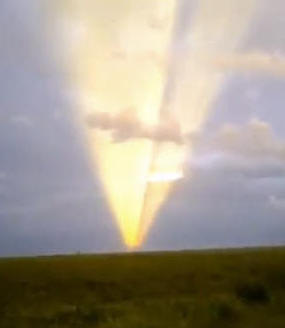 And finally, from two shorter “words of knowledge” (we tend to refer to them as “addenda”). Said one from more than a decade ago:

“When you see the great smoke rise, Satan will have touched the earth. His manifestation will be near. He will seek to destroy what Christ has built, as Jesus came to destroy the work of the devil. In the end, the Cross will predominate, but not before the end of an era that has strayed.”

“Great smoke.” A volcano? Wildfires? A mushroom cloud? A comet? Or nothing? Your guess is as good as or better than ours.

What might that mean? How do they tie together? Are they worth tying together?

We’ll say this much: startling aspects of some of the “words” already have materialized.

Applied to our times — to the current crisis — do they have more meaning now than ever?

[resources: Tower of Light and Fear of Fire]

[If you already have the above books, you may want to revisit them in light of today’s world]

[Footnote: Said the Pope just yesterday, in speaking about the pandemic: “We have sinned against the earth, against our neighbors, and ultimately against the Creator, the benevolent Father who provides for everyone, and desires us to live in communion and flourish together.” Being made in the image of God, he said, means “we are called to have care and respect for all creatures, and to offer love and compassion to our brothers and sisters, especially the most vulnerable among us, in imitation of God’s love for us, manifested in his Son Jesus, who made Himself man to share this situation with us and to save us.” He added: “We see these natural tragedies, which are the earth’s response to our maltreatment. I think that if I ask the Lord now what he thinks about this, I don’t think he would say it is a very good thing. It is we who have ruined the work of God.”]