A few matters, worthy of our note, starting with New Mexico and a statue of Guadalupe there that’s lachrymating:

It’s in Hobbs, near Las Cruces, and the diocese there has announced test results showing that the tears are olive oil. No one will say officially, of course, where the olive oil is from. Seeing that the statue has been scrutinized close-up and personal, the most ready explanation: Heaven (during such examinations, which often involve removing the statue, it would be difficult for a perpetrator to sneak up with a syringe).

Bishop Oscar Cantu told Las Cruces Sun-News that a sample of the lachrymation was sent for laboratory analysis, “and we determined it was olive oil, a scented olive oil.”

The ambrosial aroma of Mary?

Olive oil is balm. It can soothe. It can heal. Much healing is needed right now across the continent called America and especially among Latinos who predominate in that state and are so devoted precisely to: Our Lady of Guadalupe.

When it comes to phenomena, one writer for the Protestant website Charisma News warns: “Many in the charismatic movement today are being led away from Jesus, not by sex, booze, and drugs, but by an unhealthy fascination with signs, wonders, and miracles. For example, a young man shared with me about being in a meeting where miracles were being greatly publicized. He said that at one point the crowd began to chant over and over ‘Signs! Miracles! Signs! Miracles!‘”

That’s certainly over the top — looking for nothing but wonders; demanding them — at the same time such a view must be balanced with the spontaneity of Heaven — which sends signs that are equally bad to ignore.

One notes that no one in the Diocese of Las Cruces chanted for the statue to exude olive oil. It followed their prayers; it came with their devotion — their belief.

“Believers are not to follow signs; signs are to follow believers,” said the commentator — and correctly. “Mark 16:15 says, ‘And these signs will follow [accompany] those who believe…’ Believers are to follow Jesus and let the signs follow where they will. The devil can perform signs (remember Pharaoh’s magicians) and if we are following signs, we are headed for trouble.”

So on the mystical front there is the statue and also a supposed image and ongoing apparition in Cameroon (west-central Africa). Says a report from newspaper, “Residents of a village in southern Cameroon say they observed an apparition of the Blessed Mother and a ‘dancing sun’ phenomenon on June 18.

“The village of Nden has since been bubbling with excitement when local people claimed to have observed a phenomenon likened to a ‘dancing sun’ observed in the sky between 7.30 and 8.00 am. Others claim to have seen the Virgin Mary.

“Authorities from the Diocese of Sangmelima, about a hundred miles south of the capital Yaounde, have not yet offered comments on the phenomenon. Instead, they are treating it with a great deal of caution.”

Very prudent, for there are strange aspects.

Mary supposedly began appearing to a retired woman named Madeleine Ongono who claimed to see the mother of Our Lord while doing the laundry and feeling “invaded by a strong light” that cause her eyes to “roll.” She then saw Mary “in the middle of a huge moon.”

Are we talking trances — or is the rolling of eyes sort of a cultural phenomenon, for it was also this way, to an extent — the eye movements — with seers in Kibeho, Rwanda, and Garabandal, Spain.

In 1986, several women claimed to have seen the Virgin Mary appear next to a tree in a neighborhood close to Minkan called Nsimalen. The area has since become a popular pilgrimage site that has generated a lot of profit. But the years apparently have yielded fruits and behavior indicating a heavenly origin. Said the diocese: “As of today, we are talking about the alleged appearance of Nsimalen. This means that the credibility of the phenomenon has increased with the many years of fidelity that Christians have been able to manifest in this place. Many conditions are already met. It is therefore appropriate to call it by the official name that Rome recognizes. Namely: presumed appearance.”

We’re not able to find any messages. But there is certainly the need for supernal comfort. Violence — brutal executions — occur in the country, as is also true with neighboring Nigeria, a hotbed of Catholicism and also a place of persecution. Two-thirds of the people in Cameroon are Christian. Nigeria, meanwhile, experienced an event on October 13, 2017, whereby an estimated 55,000 saw a “dancing sun” during a Marian congress.

Four years ago another phenomenon made news  in Cameroon when a mysterious stain on the wall of a home in the capital of Yaoundé was interpreted by many as a miracle, a stain allegedly resembling the Face of Jesus Christ.

Yet, “when contacted by FRANCE 24,” says another report, “an officer of the archdiocese of Yaoundé, speaking anonymously, deplored the fact that this alleged apparition has duped so many people: 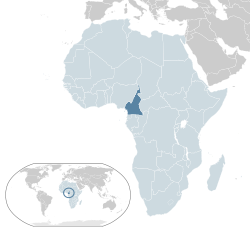 “A representative of the Church went on-site to assess the situation and, according to his preliminary report, the stain was probably caused by mold. We are waiting for the definitive version of events by the end of the week, but we regret that this event is taking attention away from legitimate events of celebration, such as the canonizations of Pope John Paul II and Pope John XXIII that we will celebrate in Yaoundé on Sunday.”

Said a local historian at the time: “Around the house, there were many vendors harassing the crowd to buy crucifixes, plaques, and objects representing Jesus’s face. There was even a small local enterprise selling bottled water labelled as ‘water of Minkan.’ They were shouting ‘buy water from the neighborhood blessed by God!’ and were selling the bottles for 1000 CFA each [editor’s note: 1.5 euros instead of the regular price of 300 CFA, which is less than 50 euro cents].” Not a good sign.

And that’s the way it is, said the staid Walter Cronkite.

Caution is always in order. So is openness — as such signs appear where they may — as the wind blows where it so wills — and sweeps across the landscapes of troubled nations.

[Footnote: when it comes to mysticism, the fruits can be vast. In comes to light, for instance, that a famous portrait of Jesus came to artist Warner Sallman — who never wanted money — in a dream in 1924. The image is the most popular American painting of the twentieth century — over half a billion reproductions of it!] 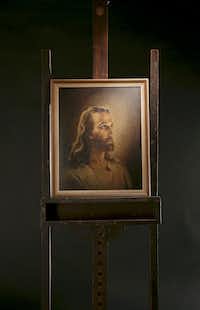