Last year was the hundredth year anniversary of Our Lady of Fatima (1917). I previously wrote a long analysis of the Second Message of Fatima (dated August 31, 2014), from which this current text on Ukraine is taken. Our Blessed Mother followed Fatima almost exactly 70 years later when she appeared as Our Lady of Ukraine (1987). Those apparitions of the Blessed Mother are otherwise referred to as Our Lady of Hrushiv (pronounced Hru-Shoo).

Last year also was the thirtieth year anniversary of the apparitions in the Ukraine. Our Lady’s appearances in Ukraine are of utmost significance to a full understanding of the Messages of Fatima.

Most of my information about Our Lady’s apparitions in Ukraine comes from the book Josyp Terelya: Witness to Apparitions and Persecution in the USSR. This is an autobiography by a mystic, Josyp (Joseph,

as I call him) Terelya, with the assistance of Michael H. Brown. (The book was published by the Riehle Foundation, Milford, OH, in 1991.)

Terelya was a mystic of the highest caliber and renown, comparable to the many saints in history who suffered immense hardship in life, but who periodically talked with and received messages from the divine. Joseph later became close friends with Pope John Paul II, and their picture is together on the cover of the book. The book is worth reading just to learn about Joseph’s life and the brutality of being a Christian in Russia, then still a communist country.

Our Lady appeared at many small villages throughout the western part of Ukraine in the late 1980s. In addition to Hrushiv, the sites included the little towns of Hoshiv, which is about 27 kilometers from Hrushiv, but also the communities of Buchach, Ozerna, Kaminko-Buzsk, Berezhany, and the old Marian site of Zarvanystya. At least 14 different sites within the small region. [Terelya, page 285.] 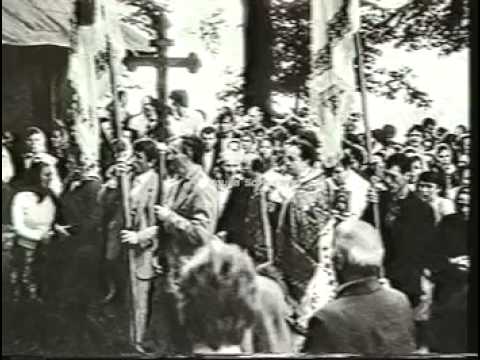 Why did She choose the Ukraine? Why Hrushiv?  Our Lady had appeared in 1914 at Hrushiv – with a message of coming war and a horrible persecution if Russia did not turn to her Son. This was a foreboding of Fatima. “Her message was startlingly similar to what the three Portuguese children would hear three years later at Fatima.” [Terelya, page 21.]

As for the Ukraine, it was the first country in Europe [this is the easternmost side of Europe] to have consecrated itself to the Immaculate Heart of Mary, which was done under several saintly leaders of the country about the year 1000. Thus the country has been devout in its faith, and close to Our Lady and Our Lord, for centuries and centuries, long before anyone even thought of the concept of communism in the 20th century.

Our Lady showed a truly phenomenal and unique pattern of modern day apparitions in Ukraine, during the late 1980s, to say the least. > At Hrushiv the apparitions were comparable – in their visual impact – to the excitement, mystery and glory of Our Lady’s apparitions at Cairo, Egypt in recent years. Literally tens of thousands of persons in Hrushiv could see the Blessed Mother Mary, in all of her heavenly color and glory, for hours on end, day after day, as She hovered above the Blessed Trinity Church. Persons made pilgrimages from distant places; onlookers were struck with overwhelming awe; and many of the communist guards sent to control the crowds dropped their weapons and sought to convert.

Yet there was one very important added quality to the apparitions at Hrushiv that was lacking in Egypt, and that did not occur at other Marian sites in the world:  At Hrushiv Our Lady spoke to almost everyone who was present to witness Her appearances – tens of thousands of persons at a time – and she provided prophetic messages to certain specific visionaries, such as Joseph Terelya. Multitudes heard her heavenly voice! And she spoke to each person individually! The apparitions began exactly one year after the nuclear disaster occurred at the nearby town of Chernobyl, which was on April 26, 1986, and they lasted from April 26, 1987 through September, 1987. Our Lady continued to appear in different villages, and periodically for years, after the dates just mentioned.

Our Lady’s appearances at Hrushiv magnified and built upon what She said at Fatima. The Western world still may not know much about the apparitions, and they have not yet been officially approved by the local Catholic bishop(s) or by the Vatican. They suffer similar political challenges to full acceptance as do the apparitions in Medjugorje. But they captured a Pope’s full attention. And the same with then Cardinal Ratzinger.

The messages of Our Lady to Joseph – and presumably to many others, each in their own circumstances – can be quoted below. I will minimize my own commentary. Just read the following:

Here is another quote on the issue of Russia. And THE YEAR IS 1987:

“Russia continues to refuse to recognize my Son. Russia rejects true charity and continues to live a demonic existence. Did I not ask for prayers for the lost Russian people on other occasions? If Russia does not accept Christ the King, the entire world faces ruin.”

I will not go into all the prophecies that were given to Joseph. You will need to read the book. But, for example, Joseph was shown a screen in the air of 19 faces. He could recognize some of the faces – they were government officials, some were KBG, but others were priests and even a Cardinal. The faces were all contorted. “Though they wore smiles, they were frightening smiles. Their eyes were anything but trustworthy.”

Joseph said that he did not experience fear, but instead experienced terror, in seeing them.
Joseph concluded his account of the vision by remarking, “When I came to, I began to understand the great peril facing the Church. There were many faces I never expected.” Our Lady bid him to keep this secret. [Terelya, page 272]

Joseph traveled to Rome, after the apparitions concluded in 1987, to visit with Pope John Paul II. In the process, he encountered the Cardinal who he had seen in vision. Joseph said that he spent five hours speaking with the Cardinal. Later, Cardinal Ratzinger urged Joseph to speak to as many groups as possible about his experiences. This he did, including the U.S. Congress. In response to one Congressman, who was a very devout Catholic and believer in Fatima, Joseph said [at page 311]: “The apparitions of the Mother of God in Medjugorje support the apparition in Fatima, and ‘in a short while after’ they will support the apparitions in Hrushiv in the Ukraine.”

I ended the discourse on Fatima and the Ukraine (in 2014) with quotes from two very saintly persons. The quotes pertain to Fatima, but they may apply just as well to what Our Lady said in 1887 in the Ukraine. Here are the two quotes:

 Pope Benedict XVI on May 13, 2010 at Fatima:
“One would be deceiving himself who thinks that the prophetic mission of Fatima is concluded.”

“Father, the Most Holy Virgin did not tell me that we are in the last times of the world, but She made me understand this for three reasons. The first reason is because She told me that the devil is in the mood for engaging in a decisive battle against the Virgin. And a decisive battle is the final battle where one side will be victorious and the other side will suffer defeat. Also from now on we must choose sides. Either we are for God or we are for the devil. There is no other possibility. The second reason is because She said to my cousins as well as to myself that God is giving two last remedies to the world. These are the Holy Rosary and devotion to the Immaculate Heart of Mary. These are the last two remedies, which signify that there will not be others. The third reason is because in the plans of Divine Providence God always, before He is about to punish the world, exhausts all other remedies.”

This paper is an excerpt from: “The Consecration of Russia To the Immaculate Heart of Mary: The Second Message of Our Lady of Fatima,” John W. Hauck, dated Sunday, August 31, 2014.