From Forums of the Virgin Mary: 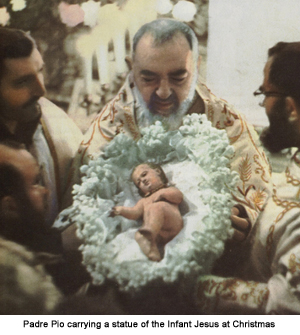 What special graces the Child Jesus gave to Padre Pio!

The Child Jesus has appeared to various mystics and seers through the centuries.

And many times He has done it in the sensitive way of a Child.

Which leads us to think of His birth in Bethlehem.

And it elicits the feeling of tenderness that people often have when they see a baby.

Padre Pio was blessed to have had these appearances, although he rarely commented on them.

But the appearances of the Child Jesus that Padre Pio had were different from the others recorded, and therefore were unusual in history.

Here we will talk about those appearances and you will see why they were rare.

Padre Pio was a great devotee of the Blessed Virgin Mary and prayed several Rosaries daily.

And obviously, he adored Jesus, especially during the celebration of the Eucharist, when he wept for His Passion.

But he had a bond of love with the Child Jesus since childhood, which in a kind of providential child’s play, began with the assembly of the Nativity scene at Christmas.

At his home in Pietrelcina, it was he who prepared the manger for the family.

He often started working on it as early as October.

When he went out to graze the family flock with friends, he looked for clay to mold the statuettes of the shepherds, sheep, and Magi.

And then he would put special care in the creation of the Baby Jesus, Whom he rebuilt over and over again until he felt that he had it perfect.

He also prepared the little lights, filling the empty shells of the snails with a few drops of oil and a little tow.

And then he would spend hours before the birth, singing or praying the Rosary.

As an adult Padre Pio counted the days until Christmas and sent everyone his wishes of peace and joy.

And after being ordained a priest, he also wrote to his spiritual children inviting them to pray to the Child Jesus in the days preceding Christmas.

He called his spiritual children to pray especially the novena to the baby Jesus [there’s one here and below].

“At the beginning of the holy novena in honor of the Holy Child Jesus, my spirit felt like being reborn to a new life; the heart feels too small to contain the goods of Heaven.”

And there is a phrase that has remained for posterity and that reveals how he felt about the Child; he said

“I am the toy of the Child Jesus, as He often tells me, but what is worse, Jesus has chosen a worthless toy.”

And in his cell in San Giovanni Rotondo he had a statue carved by an unknown sculptor that represents the standing Child Jesus twenty-four inches high.

The Child Jesus is dressed in a beige robe to the feet, the small right hand is showing its three fingers raised in blessing

And on the left He holds a red heart where a golden flame burns.

On the lower edge of the cassock there are small golden crosses.

And the crown placed on the head is engraved with the words “Heart of the World.”

Padre Pio called him the “Baby of Kisses” because, every time he was in front of him, he prayed to him and kissed him. [Below, altar boy hold Padre Pio’s Infant, 1954] 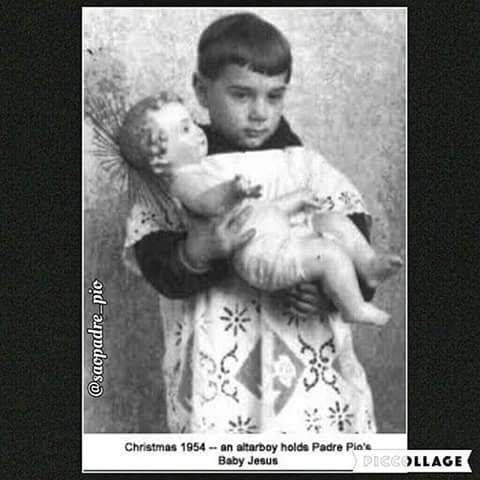 Today that image is guarded by the Campanini family.

Padre Pio himself gave it to Carlo Campanini to take it out of his prayer boundary and into the world.

This image is displayed during the Christmas period in the church of San Salvatore in Lauro, in Rome, dedicated to the Virgin of Loreto, near Piazza Navona, which is the regional coordination center for Padre Pio prayer groups, and it preserves important relics of the saint.

But behind that formal devotion, Padre Pio had a supernatural contact with the Child Jesus, to the point that his connection with Jesus was special through his childhood.

And he tried to prevent the supernatural contacts he had with Him from being made public, for example when extraordinary events occurred in which the Child appeared to him, although sometimes he himself wrote those encounters, as for example in a letter to Father Agostino from 1912 where he says,

“At last the Child Jesus came … how my heart beats, how my cheeks burned near this heavenly Child!”

The Child Jesus appeared to Padre Pio and we do not really know how many times, because he did not mention it.

But these appearances had a big difference from other appearances, about which we made videos.

The credibility of the appearances of the Child Jesus to Padre Pio did not depend on the accounts of the saint.

The known appearances of Padre Pio are attested by other people, who saw Padre Pio with the Child Jesus.

Witnesses have reported that they could see Padre Pio holding the child Jesus in his arms.

And it was not a porcelain statue, but the Child Jesus himself in miraculous visions.

This makes the apparitions rare in the history of the Church.

The first appearance of the Child Jesus to Padre Pio, witnessed by outsiders, happened in November 1911, just a year after his priestly ordination, when he lived in the Venafro convent.

It was witnessed by Father Agostino.

And the peculiarity is that the Child Jesus appeared with the stigmata of the Crucifixion on His hands, feet, and side.

Also, the presence of these stigmata is a rare phenomenon in the apparitions of Jesus the Child, although reasonable in this case according to the experience that the saint had. 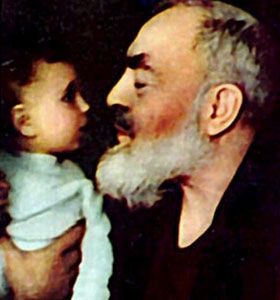 Theologians affirm that this is not surprising because for Saint Pio of Pietrelcina, contemplating the mystery of Christmas, was seeing the Child Jesus in the light of the Paschal mystery of the Passion, Death, and Resurrection of Jesus Christ.

The second apparition happened on September 20, 1919, already in San Giovanni Rotondo, on the first anniversary of his visible stigmata (between 1911 and 1918 its stigmata were invisible).

[Novena to the Infant here ]