It may be time to invoke what is known as the Hurricane Madonna. That’s a statue-like representation of Mary that they have on display in St. Augustine, Florida, to ward off monster storms [see below].

A sea captain brought the Hurricane Lady to that city in the late 1800s — explaining that his ship had been severely threatened by a storm, until they discovered the object in the hold of the ship and took it out. “Dear Lady,” he and the crew prayed fervently, “if this storm passes, and we arrive safely in port, we will place your statue with the first Catholic family we reach.”

The storm passed, and for years the Hurricane Lady has been enshrined in a wooden cabinet behind glass. When cyclones have threatened, families prayed for the Blessed Mother to intercede, and we must say that St. Augustine has been spared great storms for decades. We can only hope that such grace lasts for that city (where the first Catholic Mass in North America was celebrated); the rest of Florida, which is even more vulnerable; and for that matter coastal areas from Texas to Massachusetts.

It is certainly time to pray, for our weather has gone haywire. We have all seen news images of the climate swerve — the tornadoes in the U.S., the fires in glacier park, the 100 degrees that smashed record in normally temperate London (the 122 degrees in Iraq in the shade). Even the Pope has asked for prayers about the weather — which has caused fires from Italy and Portugal to the south of France.

Signs of the times. Pre-warnings. Will they soon precipitate an extraordinary hurricane?

With the weather so topsy-turvy, we have to be wary of precisely that — and pray. A year ago two separate hurricanes heading straight for New Orleans suddenly lost potency and veered off course as a result of intercession. “I thought you would like to know that the people of Louisiana prayed to Our Lady of Prompt Succor and invoked her intercession for help with Hurricane Lili,” noted one reader, Kathy R. Madere of Baton Rouge, referring to another miraculous statue, this one kept by Ursuline nuns. “It was not long after that the circulating winds dropped down five miles per hour and eventually before landfall went from category-four to category-two.”

It seemed inconceivable that a hurricane would drop in potency after it hit warm offshore gulf waters — but that’s precisely what happened. Headlines described the perplexity of meteorologists who had been all but certain of a powerful direct hit on a city that can easily go under water — more vulnerable than anywhere outside of the Miami-Palm Beach corridor. “Rapid reversal in Lili’s intensity remains largely unexplained,” noted a huge headline in the New Orleans Times-Picayune (page A-18, on October 4).

Now it’s time to invoke Our Lady of Prompt Succor again, and in Florida we must focus on turning away storms that threaten places like Miami, for we are entering the time of the great ocean storms, with sea temperatures increasing every year and yielding cyclonic systems with that much more energy.

I warned in Sent To Earth that as the climate shifts, storms would become increasingly unpredictable and intense. We saw this with Hurricane Andrew, which was only a precursor. Similarly powerful storms can come, but of far greater size.

One example was Hurricane Floyd in 1999. For a while that 300-mile-wide storm looked like it would maintain intensity as an extraordinarily powerful category-five hurricane (the highest ranking) and make a direct hit on an area that was also devastated by what has become known as the Great Miami Hurricane. Anyone who doesn’t think hurricanes can threaten such a huge metropolitan area should go back and read about what happened in 1926.

Moreover, as we have also warned, the current swerves in climate may soon cause experts to add a sixth category when it comes to hurricane intensity. Some believe that massive storm surges — surges far greater than any in recent times — hurled tidal waves along the Florida coasts during the Middle Ages, when the last comparable change in climate (known as the “Medieval Warming“) took place.

Naples, Fort Myers, and Tampa, along with New Orleans, need intercession — as does the coast all the way up to Cape Cod, where huge category-fives have hit in the long-gone past. Few are those who realize that Rhode Island is under greater threat than St. Augustine.

Is there really a gyration in our climate? Look at Europe. Or at Phoenix — where the pavement has been so hot that it melts shoes with soles made of rubber. “Rivers and ponds were drying up and wildfires blazed in several countries as Europe staggered through a deadly heat wave,” said the Associated Press — recalling the words of  Isaiah 42 (“I will lay waste the mountains and hills and dry up all their vegetation; I will turn rivers into islands and dry up the pools.”)

Most recently, a tornado damaged 500 homes in Florida, and the spring of 2003 has set tornado records. “What we are seeing is absolutely unusual,” said John Schellnhuber, former chief scientific adviser to the German government and now head of the UK’s leading group of climate scientists.

In addition, there is news of “black water,” blue tides, and fish kills. “Schools of rotting fish are fouling southwest Florida beaches again, the result of the same red tide that’s been plaguing the area since February,” said a recent report. In Europe the heat has killed 30,000 eels in the Rhine. There also have been large fish kills in the Great Lakes — where there are now huge dead zones.

During the Middle Ages, just before the bubonic plague, strange weather, quakes in places like Germany, and rotting fish in India served as a prelude.

Now some are increasing storm predictions. “The current hurricane season is likely to be busier than originally thought, with more of a danger to the United States and Caribbean, government forecasters said Thursday,” according to a recent A.P. dispatch. “The National Oceanic and Atmospheric Administration now expects seven to nine hurricanes, including three to four major storms packing winds of at least 111 mph.”

Others disagree. Hurricane activity will probably be below normal for the rest of the summer, despite a strong start this season, forecaster William Gray said last Wednesday — although he believes October will be unusually busy.

Whatever the case, the solution is in prayer. If not this year, next year, or the next. The mega-storm is part of the prophetic scenario. When Hurricane Floyd threatened — causing the largest evacuation in American history — residents across Florida went to the beaches and asked for God to intercede.

Among them was the famed mystic Maria Esperanza, who at the time was in a Hilton hotel room on a personal visit.

Christians of all stripes implored the Lord to halt what experts claimed was an inevitable monster storm, one far out of human control — but one that at the last minute turned north and missed the state. 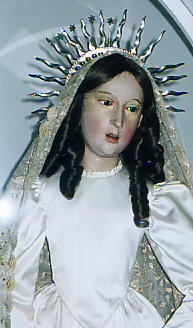 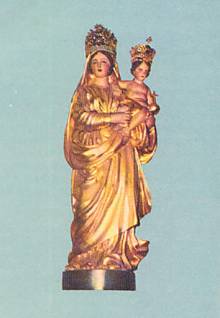 Hurricane Lady, left, and Our Lady of Prompt Succor