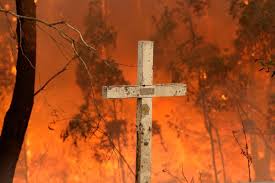 The greatest and most direct chastisement thus far in the history of the U.S., at least before 9/11, was the great Peshtigo fire in Wisconsin in 1871, incinerating 1.2 million acres the same day as the Great Chicago Fire and coming precisely twelve years, perhaps to the day, after Mary appeared in a now Church-approved apparition near Green Bay warning explicitly of a “chastisement.”
++
Of course, 9/11 also involved fire.
+
And now wildfires in California, in Australia — unprecedented ones.
+
“Bushfires are part and parcel of life in Australia, and always have been,” wrote viewer  Stewart Davies from Sydney. “There have been throughout the era of European settlement bushfires covering vast areas and persisting for a number of weeks, but in former times, the firefighting capabilities that we have now did not exist.
+
“But even in the weeks before Christmas, it became apparent that the current situation is way beyond the norm. And given the enduring drought gripping most of Eastern Australia and beyond, it was quite apparent that this current situation is something that we haven’t experienced before.
+
“Considering the horrendous anti-life legislation that has been passed at both state and federal level in recent times (though Australia is hardly unique in this regard),  I expressed my ‘gut feeling’ that: ‘our chastisements have really begun.’ I recalled the first secret of Medjugorje; that ‘something will happen in a region of the world, and at first, people will not understand the significance of it.’
+
“Well, of course, everywhere on earth is ‘a region of the world,’ and at this point, the meaning of this prophetic warning is unknown to us. But I did ponder if this current bushfire situation in Australia could be the foretold event. The chilling photograph of a sinister countenance in the fire and smoke in East Gippsland may just be a coincidence. On the other hand; I now wonder all the more! Be not afraid!”
+
An alleged seer, Valentina Papagna, about whom we have had a special report, received “messages” in December regarding the situation (which had already erupted by then).+
+
Said Valentina, who also lives in Sydney, on her website (12/21/2019):

“During my morning prayers, I offered the whole of Australia to our Lord, especially because of the ongoing drought, the devastating bushfires, and thick smoke blanketing many cities and towns. 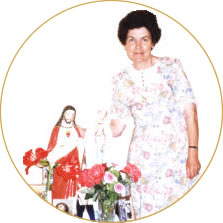 “I lamented, ‘Lord, it looks like You have deserted us! This weather that we are experiencing is unbearable. People are dying and losing their homes, and it’s not their fault. Lord, when are You going to do something about it?’

“Both our Lord Jesus and Blessed Mother appeared, and they said to me, ‘My daughter, we heard your plea and prayers. We don’t abandon people, even when they go through the hardest period of suffering.

“Blessed Mother said, ‘See, what sin causes. The sin of mankind leaves behind consequences. It affects the whole country, all of the people. This drought represents sin. Nature is so dry and thirsty, just like the souls of mankind are dry and thirsty because there is no God in their lives.’

“He will then open Heaven and pour abundant water upon this dry country. My Son, Jesus, wants this nation of Australia to come to Him and repent. Only God can give life to the full.’

“Jesus said, ‘Do not be discouraged, do not despair, do not give up. There is hope that I will change things for the better.’

“Blessed Mother said, ‘Because migrants have brought so many different religions to this country, people have abandoned Christianity. My children do not abandon prayer, especially the Rosary and the Divine Mercy Chaplet. Through prayer, my Son can touch the souls of non-believers.'”+

Added David Catanzariti: “I am forwarding a link to a news article relating to the continuing bushfire crisis in Australia. It is interesting to note that the two worst affected States, New South Wales and Victoria, have in recent times, both passed controversial legislation in relation to decriminalising abortion and legalising euthanasia respectively. A coincidence?” Perhaps another question also: where will the fire come next time?

[resources: Fear of Fire and  Michael Brown retreat in Florida and North Carolina]

In her celebrated 700-page spiritual Diary, St. Faustina Kowalska (1905-1938) tells of her many visions of Jesus and her conversations with Him. For years now, best-selling and award-winning author Susan Tassone has lived in the thrall of that spiritual classic, recently drawing forth from its rich mystical depths 365 meditations.