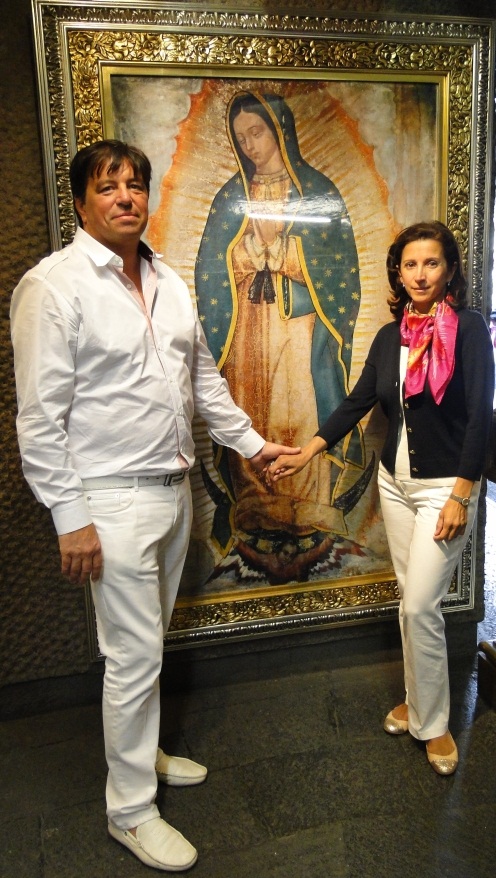 NASA [consultants] publicized the results of the related examination of Our Lady of Guadalupe. The examination of the image by ophthalmic instrumentation found that the retinas of Mary’s eyes, like the human eye, expand and contract under the influence of light. The scientists also found that the temperature of the tissue on which the image is displayed is consistently 36.6 degrees C, as is the body temperature of a healthy person.

They also examined the image of miraculous image with a stethoscope, at which point scientists measured 115 pulses per minute at Mary’s belt, which corresponds to the pulse rate of a fetus.

NASA engineers also found that the paint with which the miraculous image was taken does not exist on earth and never existed, according to Tsn.ua.

At the beginning of the 20th century, revolutionaries blasted a bomb next to the grace image, which resulted in the destruction of everything within a large radius, but the whole image remained intact.

Scientists find it interesting that Mary’s right arm is lighter and her left arm is darker, which they believe should emphasize the importance of interracial unity.

The Holy Virgin is reported to have appeared to an Indian, Juan Diego, in the winter of 1531 on Tepeyac Hill, just north of Mexico City. According to records, a woman in a golden haze appeared and urged the man to “go to the bishop […] I want a temple erected in this place!” For the second time, Diego went to the bishop, who this time said he believed that Our Lady would be there if he gave a signal. Diego again met with Our Lady, who sent her up to the top of the mountain, where she found a beautiful rose in spite of the season. In a simple robe, Juan Diego collected the roses and took them to Bishop Zumarraga. The chief shepherd fell to his knees in front of the sight in front of him: tilma (a generous cloak) became the image of Our Lady. This is the site where Our Lady’s Cathedral was built, and it still preserves Diego’s tilma.

According to research physicist Aldofo Orozco, there is no scientific explanation for the survival of the tilma. Within 10 years, similar tissues will be destroyed in the local salt-wet air. For example, a copy made in 1789, made with the most advanced technology of the time and placed behind protective glass, completely faded in 8 years. In contrast, the original, unprotected ban was not damaged by UV radiation, salt-wet air, and tens of thousands of candles lit in its vicinity for over a hundred years.

The original image attracts crowds of pilgrims: the iconic basilica is considered to be the most visited pilgrimage site in the world.

In August 2017, two links circulated on social media that suggested that NASA had announced it had deemed Mexico City’s Our Lady of Guadalupe tilma (a cloak or mantle made of cactus fiber upon which her face is said to be imprinted) to be “living”, in that the image reacts to outside stimuli.

Social media users shared links from RCatholics.com and Matrix Drops, the former dated 7 August 2017 and the latter with no easily discernible date. Together, the viral items suggested that indeed a discovery of some sort had taken place in early August 2017: The Matrix Drops link was not published in 2017, but instead dates back to at least 2015. It may have been shared in lieu of RCatholics.com’s iteration (complete with a “breaking news” graphic) which didn’t even mention NASA, but had a passage claiming that it has qualities that are “humanly impossible” to replicate:

Phillip Callahan, a biophysicist at the University of Florida, discovered that the differences in texture and coloration that cause cause Our Lady’s skin to look different up close and far away is impossible to recreate[.]

The tilma has shown characteristics startlingly like a living human body.

In 1979, when Callahan, the Florida biophysicist, was analyzing the tilma using infrared technology, he apparently also discovered that the tilma maintains a constant temperature of 98.6 degrees Fahrenheit, the same as that of a living person.

Callahan’s original analysis is not readily available, but reviews of the decades-old infrared photography examination of the piece carried out by him did not conclude that the material was metaphysical in origin. A 2010 Skeptoid item summarized Callahan’s findings less sensationally (transposing the date of the research in 1979 [PDF] with its publication in 1981), adding that subsequent analysis did not support any supernatural elements:

The most notable examination was a three hour infrared photographic session by Philip Callahan in 1981, who did note multiple layers of paint covering changes to the hands and crown, but came away with more questions than answers. Callahan found, for example, that most of the entire painting seemed to have been done with a single brush stroke. He recommended a series of more tests, but the only one allowed by the Church was a spectrophotometric examination done by Donald Lynn from the Jet Propulsion Laboratory. The only result released of his examination was that “nothing unusual” was found.

Until the claim was picked up by RCatholics.com on 7 August 2017, no one attributed details like the tilma’s purported temperature to Dr. Callahan or his 1979 research. Matrix Drops cited a 20 December 2011 story for its claims that “NASA scientists” had determined the Virgen de Guadalupe to be alive. That material cited an unlinked source and appeared to form the basis of both circulating claims (translated)

The picture was also examined with a stethoscope, at which time scientists found a heart rate of 115 at her belly, corresponding to a pulse rate of a fetus.

NASA engineers have also found that the paint with which the image was made does not exist and never existed anywhere on earth – writes Tsn.ua’s internet news portal.

The claim that “NASA scientists” had affirmed the supernatural nature of the sacred image dates back as far as a 2001 column, but the 2011 iteration appears to have been a complete fabrication with no supporting evidence for its extraordinary claims. Research carried out by Callahan for the Center for Applied Research in the Apostolate (CARA, a religious organization) in 1979 in no way amounts to evidence in 2017 that the piece is “living,” has a heartbeat, or maintains a temperature identical to that of the human body.

We contacted NASA to ask about the rumor, but have not yet received a response. However, the legend’s trajectory over the years indicated that its origins lay not with NASA, but with an unreliable and unsupported item published in 2011, three decades after Callahan’s analysis appeared in print).