We spoke the other day with an exorcist from the upper Midwest who offered some intriguing tidbits about his work. At the behest of his bishop, he must remain anonymous.

This is something we have heard before: the requirement, for certain exorcists, of anonymity.

As it turns out, there are two main reasons, the exorcist explained. One is that when an exorcist’s name gets out, he may start hearing from a slew of people who are emotionally disturbed. Of course, it’s often difficult to know when emotional disturbance is caused by natural or supernatural forces (or both). Suffice it to say, there can be a flurry of distraction. The other reason for keeping names quiet: satanists and others involved in occult practices are known to actively curse local diocesan exorcists. In the case of this priest, there have been at least a couple instances, he says, in which statues of the demonic Mexican “saint,” Santa Muerte, have been planted in the front yard of his rectory.

That was when he was working in a large Hispanic community. The “saint,” he explains (“Our Lady of a Holy Death”), is a mockery of Our Lady of Guadalupe. “Satan makes a mockery of everything holy,” he points out.

“In theological language, it is an anti-sacramental, a malefice.”

Sometimes, the spiritual resistance to exorcists comes in a way that is obviously preternatural. Call it the “evil eye.” Sitting in a restaurant, the exorcist once noticed — and clocked — a man staring at him (with an evil expression) for a solid eight minutes.

The presence of an exorcist, he says, “rattles” spirits.

“About once a month, someone — a possessed person — will manifest in front of me, screaming at me. You see it over and over,” he told Spirit Daily, after clearance from the diocese. 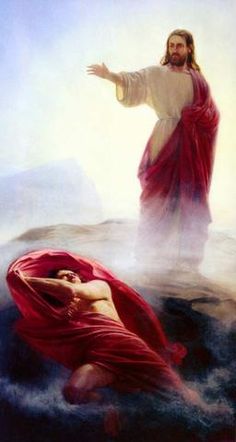 There are also “suspect” individuals who request personal meetings. This he and the diocese avoid like the plague. “I’ve gotten e-mails from people who are more than dubious asking for a meeting because they need help,” he says. “When I list the conditions, they back down. I tell them we’re not going to be alone, and that they will have to bring a photo identification and go through an interview process.” As for spirits rubbing off — transferring — he says, “I think every exorcist experiences some form of oppression. It’s good to have exorcists perform minor exorcisms over each other to clean up residue.”

Otherwise, observes this exorcist, who was trained in Rome, there can be that oppression — “physical ailments or something happening in your sleep — night after night of sleep deprivation and when you do sleep, nightmares.” Often such attacks happen just before an exorcism.

And the devil seems especially to come around at three a.m. “It’s a mockery of the hour of Passion,” says this Midwestern cleric, who is in his fifties and has conducted more than fifty formal rites of exorcism. “Everything Satan is going to do is a cheap imitation of what the Catholic Church does.”

What are some of the strongest manifestations he has witnessed?

Besides the relatively pedestrian ones (a person speaking in a foreign language, or knowing something secret about those in attendance), he has witnessed transmogrification: the heads and faces of those possessed “morphing” into someone — or  something — else. An example of this was an Afro-American woman who during exorcism “sprouted a goatee” (which convinced a skeptical husband that something preternatural indeed was afoot!). The priest also has seen “the shape of a head changing into the head of a serpent — elongation of the jaw and a flattening of the forehead.”

He never has seen levitation but probably would have, he notes, if they hadn’t held down a man whose shoulders were rising.

There is debate about whether demons can “read” our thoughts. He is one who thinks not. He believes when they exhibit knowledge that seems telepathic, it can be one demon implanting a thought in a person’s head and then relaying what was implanted to a second demon that feeds it into the head of another person.

Reiki, yoga, tai-chi: all no good, he warns.

As for generational demons: he believes the jury is still out. There are indications that it is a real manifestation, and he does believe a generational demon can be assigned to a family.  He doesn’t believe that spirits of the deceased haunt people and places; instead, he argues, it’s a demon emulating the dead. That’s another issue subject to extensive dispute.

“There are souls in purgatory that are benign and make their presence known so people will offer Mass for them — special prayers and Masses,” he says as a qualification. “They’re to be treated with charity.”

Demons often claim to be Judas or Hitler or someone equally nefarious. A con job, from spirits of deception? Whatever is the case, “you just treat them all in the same way,” he says, describing hell as “an excommunication from everything.”

Demons make themselves more than they are — especially when we let them. Any darkness should be cast out at the first sign of it. Strong sedate prayer goes a long way. So does praying for a buffer of protection. Especially, stay away from any form of sin. Sin is a portal. Watch the tongue! “Sacramental grace and prayer and virtue,” he says, “protect against the [evil] extraordinary.”