This just in: “Sir, the event you headline on your website—the occult music in San Miguel chapel in Santa Fe—has been canceled. The Archdiocese neither arranged for nor approved this event; indeed, we were only made aware of it this morning when e-mails came streaming in.

“The Archdiocese no longer owns or directly controls the chapel of San Miguel; rather, it is now cared for by a private entity which states that there was some miscommunication with those who proposed such an event.  They assure us that the event is indeed canceled. Blessings to you, Fr. Glenn Jones, vicar, Archdiocese of Santa Fe”

It’s the oldest still-standing Catholic church in the United States.

It dates back to 1598 — when it was built over an ancient sacred “kiva” (spot for Indian spiritual ceremonies).

It is the San Miguel Mission in Santa Fe. 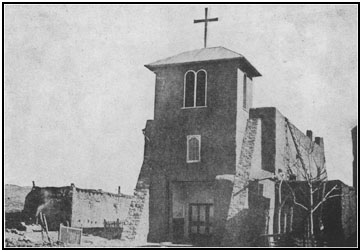 nal church can still be glimpsed through holes in the wall and altar floor and this place, at least to some, has more of a spiritual feeling than any other in the city.

On the altar is a statue of the Archangel Michael, who is also represented on a 400-year-old buffalo skin, and in the back, beneath a sloping choir loft, is a large bell that was imported from Spain and constructed in the 1300s.

In 1955, says the sanctuary’s literature, the Christian Brothers, who still own the mission, commissioned an archeological investigation of the ancient chapel and located the original dirt floor and sanctuary steps,   whic

h can be seen just beyond the Communion rail through the floor opening.

But is the paganism returning?

Incredibly, this Halloween, an occult event, “The Shadow of Night,” is being held at the mission. It is being presented by a consortium of musicians known as “Severall Friends” — perhaps oblivious to the connotations of what they are perhaps (we hope) whimsically celebrating. 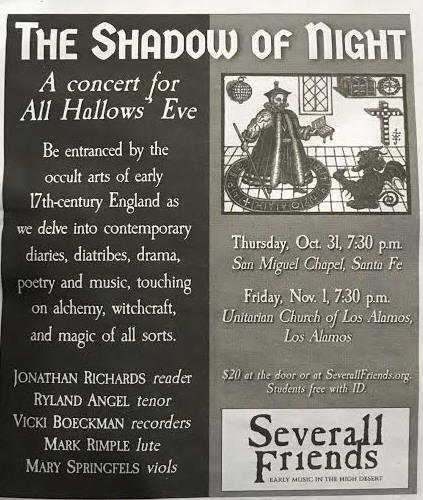 Pray this event away!

What a time, ’tis that in which we live.

[resources: see archived story on supernatural nature of the church]

Few people question whether or not the San Miguel Chapel in Santa Fe, New Mexico, is the oldest Church in the United States, but many do question just how old it is. It is no easy task to sift historical fact from traditional belief. The earliest documentation we have of the existence of San Miguel Chapel is from 1628, so we know it was built sometime before then. Oral history holds that San Miguel Chapel was built around 1610, and it has been rebuilt and restored several times over the past 400 years. The original church, the “Hermita de San Miguel,” was built on the site of an ancient kiva of the Analco Indians. It is believed that it was constructed by Tlaxcalan (Tas-cal’-en) Indians, who came to New Mexico from old Mexico in 1598 with a Spanish contingent led by Don Juan Oñate. In its early years, the church served a small group of Tlaxcalan Indians, laborers, and Spanish soldiers who lived in this area on the south side of the Santa Fe River.

The church was partially destroyed in 1640 at the hands of Luis de Rojas, a provincial governor who feuded with church authorities. It was reconstructed but was severely damaged again during the Pueblo Revolt of 1680. Twelve years after the Pueblo Revolt drove them out, the Spanish returned to Santa Fe, led by the Governor General Don Diego de Vargas, who ordered the repair and restoration of San Miguel Chapel. By the end of 1710, the work was completed and a new roof was in place. In 1798, the mayor of Santa Fe helped fund major repairs and the construction of the beautiful altar screen in the front of the church. An elaborate three-tiered bell tower was erected around 1848, followed by the installation of the 780-pound San Jose Bell in the bell tower around 1856.

In 1859 Archbishop Jean Baptist Lamy purchased the Chapel and adjacent land for the De LaSalle Christian Brothers, who developed a school on the adjacent site. Repairs were initiated again in 1862 by the Christian Brothers. A wooden floor was added, as well as the Communion rail and a large door at the entrance. In 1872 a strong storm struck Santa Fe and brought down the bell tower and, along with it, the San Jose Bell, which is now on display inside the Chapel. By 1887 the Chapel was in serious need of repair, but with no funds available, the Christian Brothers came to a painful decision to demolish the structure. When the local community learned of its plight, many people came to the rescue. At this time, the first of two stone buttresses were built on the front of the building to shore up the adobe walls, and the interior and exterior walls were plastered. A tar and gravel roof replaced the old mud roof, and a new, smaller bell tower was added. Two years later, two additional buttresses were added on the north wall.

In 1955, a major restoration was carried out under the direction of Ms. E. Boyd, a Santa Fe painter and Spanish Colonial art expert. The original dirt floor and sanctuary steps were uncovered and can be seen today just beyond the Communion rail. During this investigation, many human remains and pieces of pottery were found buried under the church floor which made for a fascinating educational experience.]