Have you noticed, perchance, how, in certain far-off nations, there are what can only be deemed epidemics of possession?

Usually, it’s somewhere in deep Africa. You’ll see a report of an entire school closed while exorcists go to work, cleansing it, called in even by government authorities.

Dozens of youngsters will suddenly exhibit bizarre manifestations — growling, thrashing about, rolling their eyes, claiming dark apparitions (that others likewise see). In the past twenty years, at least a dozen schools have declared such an emergency — that we know about.

Most recently, we had this report (in the Zimbabwe Mail):

“In a suspected case of Satanism, a Grade Three pupil at Chipiwa Primary School in Mkwasine, Chiredzi District, reportedly disrupted lessons when she started manifesting as strange occult-related happenings engulfed the school. The incident which left both teachers and pupils scurrying for cover happened on Monday morning. It is reported that while manifesting, the girl who was holding a bottle filled with something like blood was acting weirdly while going into a trance claiming she was seeing her friend based in South Africa who frequently visited her at night.”

“It is alleged that during the manifestation, she pointed the bottle at three of her classmates resulting in them to fainting. Their skin was also said to have developed snake-like colors…” An exorcist was called in.

It also occurs, allegedly, in India — where gods and goddesses still prevail and where various creatures are claimed, causing mass hysteria. Years back it was an eruption of the so-called “monkey man.”

As for the outbacks of South America, disturbing footage has emerged of a girl writhing like a snake in a rural village where locals believe 11 teenagers have been “possessed,” notes the UK Mirror (caution: tabloid). “A priest was filmed carrying out an ‘exorcism’ on one teen from Santiago de Salavina in Argentina, after youngsters aged between 17 and 19-years-old, started showing strange symptoms.”

Surely, you can peg some of it to psychology — hysteria indeed. But in other cases, an occultist ensorcelling — leveling a curse — is indicated as the cause, and may well be. Central and western Africa are the wellsprings of particularly dark occultism (progenitors, in fact, of voodoo).

Is it all imagined?

“Terrified parents have already held several meeting with the school, fearing their children have been affected by ‘black magic’ or ‘possessed by a spirit that haunts the grounds’, reports Infobae,” adds the report.

In Africa, children are often kidnapped for human sacrifice, especially albinos. It is an actual crisis (prayer need).

In India, it’s the paganism by way often of Hinduism (note the prevalence, in that religion, of horns and snakes).

But the link between satanism and youth is hardly confined to “primitive” culture. Witness the fact, as the International Business Times in the UK reported last weekend, that “adults with witchcraft and demonic possession beliefs are abusing almost 1,500 children a year, new Government statistics have revealed. 1,460 child abuse cases in England last year were ‘linked to faith and belief,’ according to the latest figures released by the Department of Education, the first Government statistics on the issue. Many injuries are due to non-Church “exorcisms.”

That’s an incredible statistic (much of it tied to immigration from voodooist nations).

In the U.S., it was an eruption, years back, of what they tried to call “Tourette’s syndrome” — whereby kids were suddenly laughing or talking uncontrollably, even lapsing into trance. Some is neurological. Some is not.

Only when we stop giving obvious spiritual afflictions psychological or biological names will we alleviate suffering and in many cases prevent them in the first place. 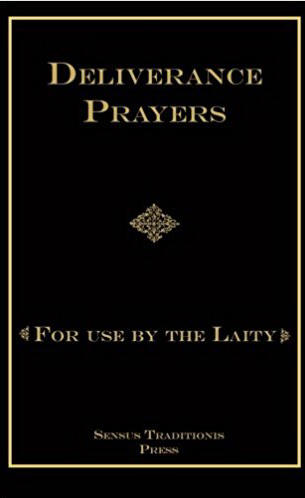