The demons are organized very efficiently to tempt human beings.

And they do it like in a relay race.

A demon does the work for which he is expert.

And then when the person is mature, he hands over the post to another so that he is in charge of following and so on, in a chain.

This was revealed to Santa Francesca Romana, who was even shown what the temptation is at each stage, when a person is moving away from God and is on the way to perdition, and the demons that direct these attacks.

Here we will talk about the visions that Francesca Romana had about purgatory, demons, and hell, and the process of tempting people, so that you have knowledge, with the aim of defending yourself.

Between the fourteenth and fifteenth centuries lived Santa Francesca (or Francisca) Romana, who is listed as the most Roman of the saints.

From a very pious noble family, she wanted to be a religious but was forced to marry; she became an exemplary wife and had three children. Saint Francesca founded the Oblates of Mary, became a widow three years before her death, and became a nun in the Tor de Specchi monastery that she had founded.

She had a lot of supernatural gifts.

She naturally gave off a perfume that smelled like a mixture of lilies and roses.

And when she died, during the three days of her wake, the scent of flowers on her body became more intense.

It also sometimes gave off an unearthly glow. 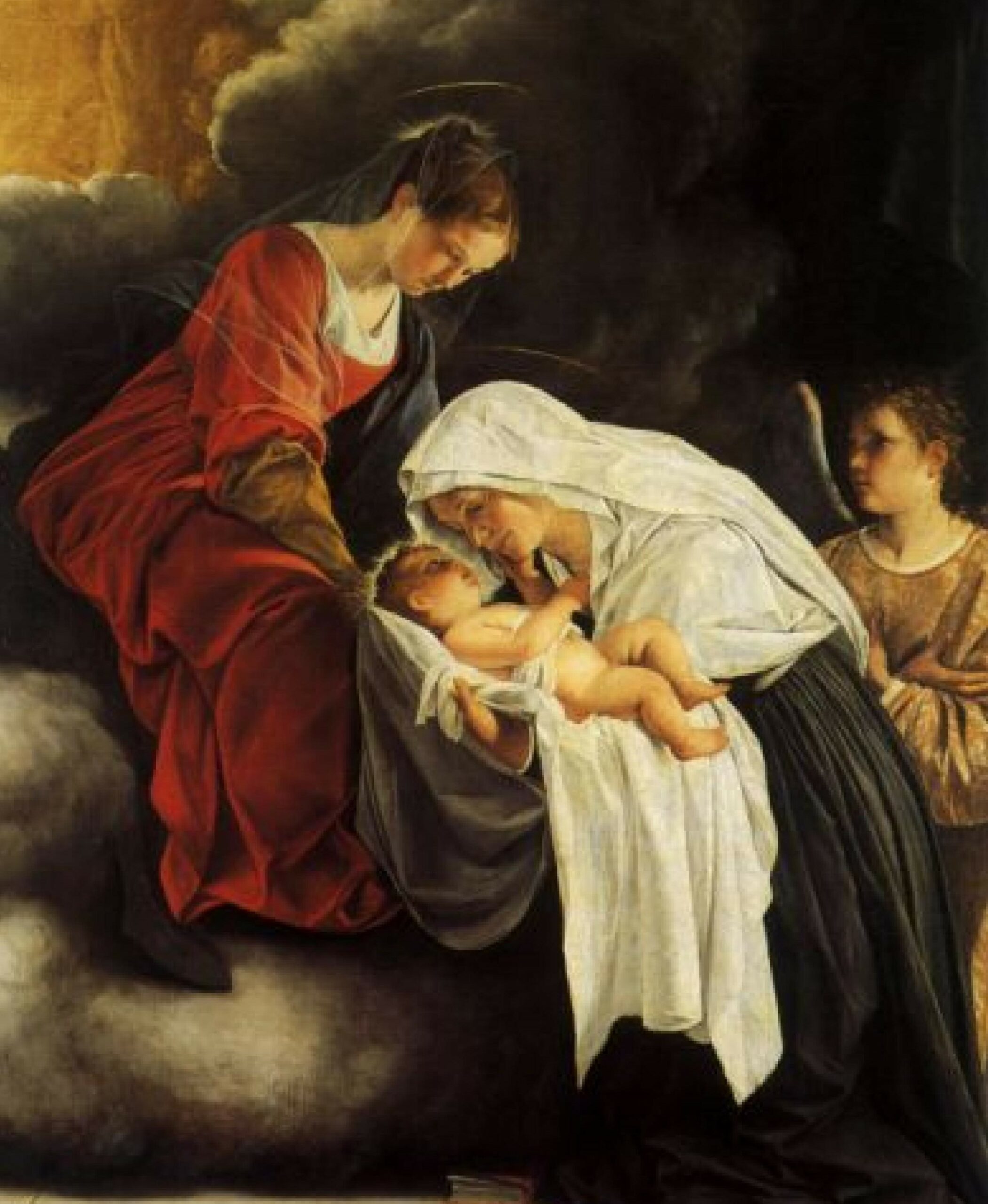 Saint Francesca had the gift of recognizing the objects that were blessed and those that were not.

She also received supernatural knowledge about things and people.

Too, she had the gift of prophecy, the gift of discerning spirits, and the gift of counsel, which she used to convert sinners and lead the deviant to the right path.

When she meditated on the Passion of Christ, she felt the pains that the Lord had experienced.

And on Christmas Eve 1433, she had the joy of receiving the Child Jesus in her arms.

When her son died in 1413, He appeared to her with a young man of the same size, but much more beautiful.

And he told her that he was the archangel that the Lord had sent to assist her in her earthly pilgrimage.

He would help her with everything.

And that spirit radiated such light that Francesca could read or work at night, without any difficulty, as if it were daytime.

It lit the way for her when she needed to go out at night.

And with that light she could see the intimate thoughts of hearts.

She had many visions about the afterlife.

She was taken to purgatory and said that neither horror, nor disorder, nor despair, nor eternal darkness reigns there, as in hell.

She was told that this place of purification was also called the “inn of hope.”

But she saw there suffering souls and also the guardian angels who visited them and assisted them in their sufferings.

She was also taken to Heaven, where she understood something of the essence of God.

But what is most striking about Francesca Romana’s visions are those she experienced of hell and the activity of demons.

First of all, Francesca was informed that the angels who fell into sin were one-third; the other two-thirds persevered. (This is an important word to keep in mind: perseverance.)

But these fallen angels were differentiated into three groups.

One-third were the ones who really rebelled against God and are in hell to torment the damned. They are the ones who followed Lucifer. They do not come out of the abyss except with the permission of God and when it comes to producing a great calamity to punish the sins of men.

And they are the worst among demons.

The other two-thirds of the fallen angels are the ones who did not take sides between God and Lucifer, but kept silent.

One-third live in the air and the others on the ground.

Those that are in the air frequently cause phenomena in nature: frosts, storms, noises, and wind, floods, earthquakes, etcetera — with which they weaken the souls attached to matter, leading them to inconstancy and fear, inducing them to faint in faith and to doubt Divine providence.

Because when providence is mistrusted, that is when all the temptations come.

And when there were very strong storms in the air, Saint Francesca resorted to lighting blessed candles and sprinkling Holy Water, claiming that they were the best remedy against this type of storm.

And the other third are the demons that circulate among us, who have the mission of tempting us, having previously been weakened by the demons of the air.

The demons that are among us belong to the last choir of angels, to the same choir as the guardian angels, that is, they have the same power.

All fallen demons see each other, whether they are in hell, in the air, or on earth.

They experience the fire of hell and punish each other.

But the demons of the older choirs are the ones who suffer the most.

And when the Final Judgment comes, all of them will be thrown into hell for all eternity.

Francesca related that the process of temptation carried out by demons is as follows: it begins with distrust in God, then passes to pride, continues with impurity, reaches greed, and ends in idolatry.

She said that as soon as trust in God is weakened, the devil inspires a person with pride.

And when pride has increased our weakness, the demons of the flesh come and fill our spirits.

Then, when the demons of the flesh have further weakened a person, the demons in charge of the “crimes of money” arrive.

And when this demon of money has further reduced the person’s resources of resistance, the demons of idolatry come to complete what the others have started.

And so the complete collapse of the soul occurs through successive waves of demons that attack it.

Francesca knew according to the temptation that the person was undergoing, what type of fallen angel was attacking and which choir it belonged to.

And when a demon succeeds in causing a soul to be lost, he becomes another man’s tempter, but he is more skillful than the first time, drawing on the experience that gave him victory.

But when a soul is saved, the tempting demon is outwitted by the other demons. And brought before Lucifer, who inflicts a special punishment on him, distinct from his other tortures.

But that is not the greatest suffering they have.

They suffer most terribly by seeing a public act of virtue.

They suffer more from seeing the good than from all the torments of hell.

All of this is commanded by Lucifer, who is the prince of all demons.

An angel of the highest choir of seraphim, which somehow God uses to punish demons and the damned.

His characteristic vice is pride.

Below him are three other princes.

The first is Asmodeus, whose characteristic is the vices of the flesh and was the chief of the cherubim.

The second is called Mammon, and is characterized by the vice of avarice and was from the choir of thrones.

And the third, called Beelzebub, was from the choirs of the dominations, and handles the vice of idolatry, the diviners and sorcerers.

And that demon has the mission of spreading darkness over rational creatures.

In short, during the time of Christianity there lived Santa Francesca Romana, a woman with many supernatural gifts.

She was told that although souls suffer in purgatory, it is a place of hope, where guardian angels comfort each soul.

And it was revealed to her that the third of the angels that fell are divided into three parts.

A third of them are those who actually rebelled against God led by Lucifer and are already in hell.

But they come out occasionally, with God’s permission, to produce the great disasters on earth.

The other two-thirds remained neutral.

Half of these are in the air and are the ones that produce the usual disorders in nature , and thus weaken the confidence of men in Divine Providence.

And the other half are on earth acting as the flip side of the guardian angels. Their function is to tempt people by increasing mistrust in God, then generating pride, then impurity, reaching greed, and ending in idolatry.

This information is essential to keep in mind to identify how we are being tempted and how to defend ourselves.

Forums of the Virgin Mary