This is where Jesus went: from the darkest and most painful situation any human could face to Resurrection in total light.

His sacrifice has brought others out of circumstances that can be described as likewise extreme.

When it comes to darkness, nothing is blacker than voodoo, which scares even some satanists. That’s a practice that in Haiti — which once recognized it as the nation’s official religion! — involves intentional possessions, “marriage” to gnathonic spirits, and actual (many claim effective) curses of death. Call it murder (and suicide) by occultism.

In Haiti, voodoo is syncretized with aspects of Catholicism and other faiths — thus a monstrance [top photo] and pictures or statues of saints mixed in with deeply occultic sacramentals.

And that’s where a Haitian named Fredo Saint Charles found himself –from the tender age of ten onward: steeped in voodoo as a full-fledged houngan (witch doctor).

“I was very deep in voodoo and had mastered all of its principles,” he has written of a lengthy time in his life. Others came to him, seeking supernatural help. He levied curses. He knew all the spirit names. Eventually, however — as demons are wont to do — those spirits had turned on him.

Somewhere, someone had pricked a doll that represented him — using, perhaps, the heart of a cow or bull, pieces of red and black cloth, and a multi-colored canvas, he conjectures. And suddenly he was so sick he was lapsing into unconsciousness and regurgitating blood.

He called on his occult spirits. They said there was nothing they could do for him. He called on a close “friend” who had taken him on “astral” journeys. There was nothing this spirit could do either. He called on an especially powerful spirit.  No help was offered. He called on his twin brother — who had participated with him in voodoo (as his “protector”) and had died at a tragically young age. (Tragedy follows voodooists. Disasters haunt Haiti.) Perhaps his brother had seen the Light. He could offer no relief but did have some advice for Fredo: change your life.

“As death came to carry me away,” says Fredo, “I decided to say a prayer. It is the fulfillment of this prayer that drives me today. I said, ‘Oh Lord, if you let me live, I will testify everywhere I go.'” That Spirit could help!

“It was this sentence that I cried out the moment I believed that I was going to be carried into the next life,” he recalls. 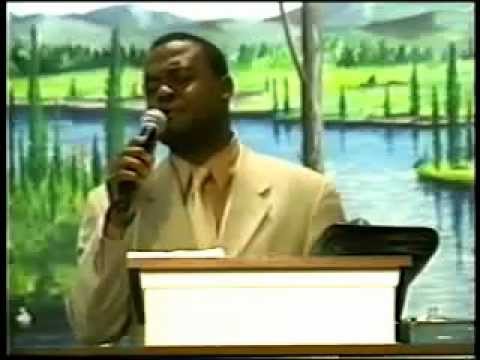 “Some seconds after praying this short prayer, I was overcome by darkness. I couldn’t see anything, or feel anything. I had stopped breathing. Later the woman I was living with told me what happened. She said she touched me and my body was icy cold. She took my pulse and could no longer feel a heartbeat. It didn’t seem like I was breathing. I was in this state for six to eight hours.

A voice told him, “Fredo, it is not we who have saved you, it is the Lord. It is the God of Heaven.”

It was this event that (understandably) changed Fredo. It is the Power of the Cross.

“I feel as if I could have written Psalm 116 [below],” he says now. “I would be ungrateful if I did not talk about God’s greatness, and share this living and personal testimony.

“I feel as if I could walk across Europe, Asia, America, and Oceania to carry the Gospel for the Lord Jesus Christ, the Divine Savior Who died on Golgotha on the Cross of Calvary.”

I love the Lord, who listened
to my voice in supplication,

Who turned an ear to me
on the day I called.

I was caught by the cords of death;
the snares of Sheol had seized me;

I felt agony and dread. Then I called on the name of the Lord,
“O Lord, save my life!..”