There it was, “under the radar” of most news outlets (or perhaps over the radar): a new academic study based on the translation of ancient apocryphal Christian texts.

A battle “against ‘diabolical’ wizards who are trying to destroy an ancient church being built as a dedication to the Virgin Mary in the city of Philippi in Greece,” writes Tony Burke, a professor of early Christianity at York University in Toronto, Canada, in a book he edited New Testament Apocrypha: More Noncanonical Scriptures (Volume 2) (Eerdmans, 2020).

It is one of more than three hundred Christian apocryphal texts that are known to exist (texts that were integral to the spiritual lives of Christians long after the apparent closing of the official Bible or “canon”), and of course, it is Mary whom the wizards, even back then, were after.

They knew she’d be stepping on the serpent’s head!

The text, it is explained by LiveScience, is recorded “in Coptic, an Egyptian language that uses the Greek alphabet, and may have originally been written around 1,500 years ago, Paul Dilley, a professor of religious studies at the University of Iowa, who translated the text, wrote in the book. The story is told in two texts that were both from the Monastery of Saint Macarius the Great in Egypt.” 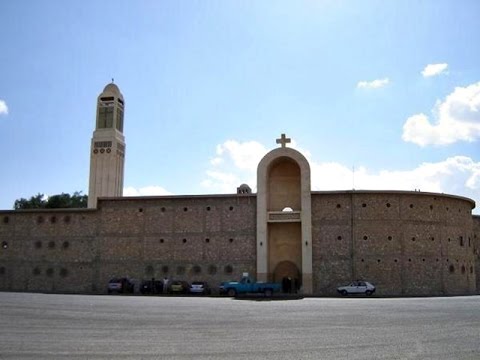 According to these old texts, the Virgin appeared to Bishop Basil (329-379 A.D.) in a dream and told him where to find an image of her “not made by human hands.”

She directed him to put the image in the sanctuary of her church on top of two columns, which he would find in a temple outside of Philippi.

“These two columns have been set up since the time of the giants. Demonic images cover them. It is not possible for anyone to take them down except through the order of my beloved Son,” the Virgin Mary says in the text.

But that order, apparently, was now given.

This is intense stuff!

And a long, long time ago. For “giants,” see Genesius!

It was when Basil followed her instructions and set out to take down the demonic columns that the “wizards” — whether this means simple pagans or more, no one is sure — confronted him and his Christian men.

Basil takes a staff that had been placed on a “sign of the saving cross” and puts the staff on the columns, “and immediately a great rumbling happened under the columns.

“Suddenly, they [the columns] leapt up at their bases and thus they rolled until they came to the place of the city’s stadia,” Basil is quoted as saying in the text.

Still, the  “tug of war” ensues. Night comes. During sleep, the Virgin again appears to Basil. “Those who did this evil deed of impertinent magic, behold, they are blind, grasping,” she says, vowing they will be defeated.

Basil wakes up, water bubbles up beside the columns creating a stream that miraculously heals people. The wizards were not so fortunate, as “immediately the earth opened its mouth and swallowed them,” the text says. This is incredible stuff: as far back as more than 1,600 years ago — fifteen centuries before Lourdes — the Virgin was bequeathing miraculous springs.

Let us preach on this sort of thing!

For those of an academic mien, LiveSience tells that today, the two surviving copies of the text are in the Vatican Apostolic Library and the Leipzig University Library.

Another newly translated text, says the site, this one in Greek, tells how the Apostle Peter trapped seven demons who were masquerading as angels in the city of Azotus (also called Ashdod in what is now Israel).

Though it dates to the eleventh or twelfth century, the story was likely originally written centuries earlier, perhaps around 1,600 years ago.

And so it is that we see the nature of spiritual warfare involving Mary and the Apostles spelled out not just recently, not just as relatively modern (post-Medieval), but way back.

The Virgin steps on that satanic head — and now, speaking of victory over evil — and hot combat — we arrive in coming days to the time of the great Archangel Michael.