Yesterday, as ashes were administered to Catholics the world over — at least practicing ones — they were told it represented the simple course of life on earth, to “Remember that you are dust, and to dust you shall return.” They may have heard the words, “Repent, and believe in the Gospel.”

In actuality, the two should go together and in some churches do, for when they’re juxtaposed, we see they hearken to what we are seeing in our world today and what has always been seen in the world and how they connect especially to that prophet named Jonah when he warned Nineveh. 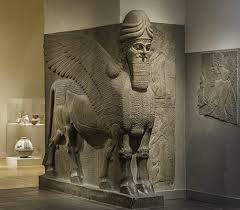 If we recall, Jonah walked across the city warning, as our current seers warn, that “in forty days Nineveh shall be overthrown.” The great Assyrian city of antiquity was for decades the wealthiest and most powerful in the known world. It was also one of the most decadent (up there with Babylon).

For after the prophet’s admonition, the people of Nineveh began to believe his word. Even the king of Nineveh put on sackcloth and sat in ashes. He issued a proclamation decreeing fasting, prayer, the wearing of sackcloth, and penitence. A Lenten event, if there ever was one.

God saw their repentant hearts and spared the city (for a while, at any rate). This was around eight centuries B.C. Where was it located? In what is now Iraq (near Mosul, where a major Marian apparition in our own time has occurred; see below). The entire city, this ancient metropolis — the New York of its day — was humbled and broken, with the people (and even the animals) in ashes and sackcloth.

And so now, at least twenty-eight centuries later, we bore ashes Wednesday on our foreheads while the cities of the world in our own time, the modern Ninevehs, faced new warnings. This time, the admonitions are by way of a virus.

It was last October 6 that, in her first public message in thirty years, that Sister Agnes Sasagawa of Akita, Japan, whose locutions from the Virgin Mary were confirmed by a weeping, Church-authenticated statue, was told that we had to: “put on ashes and pray a repentant Rosary every day” — reminding us of Jonah’s warnings.

Now, notes Scott Woltze from Portland, of the current epidemic in the Orient (and elsewhere):

“This virus seems different than previous scares, and originated in early December right about the time 40 days would have passed from Sister Sasagawa’s call to put on ashes (Jonah and the 40 days were inferred from her vision). China makes sense as the epicenter, given the state persecution of Catholics (and all Christians) since the Vatican concordat (immediately and ruthlessly exploited by the Party). Large images of Chairman Xi and Mao have been forcibly placed in churches, while icons, statutes, and crosses have been torn down in many cases. That’s certainly a type of an ‘abomination of desolation.’ Just something to discern.”

The destructive “crown virus” (crown of thorns?) reminds us to pray with the “crowns” or beads of the Rosary.

Coronaviruses are named for the crown-like spikes on their surface.

As for the alleged apparitions at Nineveh, they began in 1991 and involved an Iraqi Catholic seer named Dina Basher. No one knows where she is now — or even if still alive — for Mosul and its churches have largely been destroyed in the warfare that followed her experiences (and prophecies).

Her apparitions, which met with the bishop’s approval, allegedly included Jesus, of Whom she said, “I cannot look at Him when He appears as He is. When I look at the garment He is wearing, which has bright shining stars, there is a bright light that causes my eyes to water. But when during the Crucifixion, when He is on the Cross, I can look at Him and describe Him.

“He gives me a chalice to drink, which is the Blood of Christ, and sometimes very bitter. Or He gives me Holy Communion or blesses me or gives me the Holy Gospel to read or I hold a candle in my hand. He said that everyone must light a candle in his house, in the church, and pray for others and for the churches, and repent for their sins. He said to light candles in all the churches and welcome Him with joyful hands, because He said, ‘My arrival is very near.’ The last thing He did was give me an icon that was fastened around His neck.”

At St. Thomas Church, in front of many ecclesiastical students and faithful, she had an ecstasy and related the message of Jesus as: “Repent, for the Kingdom of Heaven is at hand,” and said He told her all people must fast three days.

That was November 25, 1991. On December 6, 1991, she related a message from the Lord in which He said, “Begin prayers in the church, begin prayers in the home. Repent, for My Second Coming is near at hand. Each of the faithful is to light a candle in his own home, sing hymns in your homes, and sing hymns of praise and glory because the Kingdom of Heaven has drawn near. Repeat Kyrie Eleison — Lord have mercy — three times in your prayers. Fasting from the tongue — not talking — is preferable to fasting from food though both are required. Come to My house and begin prayer and light the candles and welcome Me with joy. Come to Me, all who have burdens, and I will give you rest.”

There is that word “repentance” again, and the urgency of fasting, spoken on the very terrain Jonah once traversed.

On December 27 of that same year — allegedly — Jesus was quoted as saying, “I want faith, love, and unity.” On January 14, 1992, the Lord allegedly said, “Stay awake because you do not know when the time will come. I will give you an example of this. A man traveling abroad leaves home and places his servants in charge, each with his work, and orders the gatekeeper to be on watch. Watch, therefore, you do not know when the lord of the house is coming, whether in the morning, in the evening, or at cock crow. I tell you a second time, stay awake, my dear ones.”

[Footnote: We must discern not only the general mysticism but also discern among the various messages, as we are instructed in 1 Thessalonians 5:50: “Do not despise prophetic utterances. But examine everything carefully; hold fast to that which is good.” ]

[Additional note: In Sister Sasagawa’s homeland, Japan’s Prime Minister Shinzo Abe on Thursday asked all elementary, junior high and high schools to close from Monday until the end of March, when their spring vacation concludes.]

[From the mail: The town of Coimbra (Portugal) having been visited by a violent pestilence, the nuns of St Clare offered their prayers in the following form, whereupon the contagion instantly ceased.  This ancient holy prayer, left to the above-named monastery, has preserved many places from contagion where it is recited daily with confidence in God and the intercession of the Blessed Virgin Mary.  It has arrested this scourge in many places.

The Star of Heaven that nourished the Lord

drove away the plague of death which the first

parents of man brought into the world.  May

that foul constellation whose battles have

slain the people with the wound of death.

O most pious Star of the Sea, preserve us from

pestilence; hear us, O Lady, for Thy Son honours

Thee by denying Thee nothing.  Save us, O Jesus,

for whom Thy Virgin Mother supplicates Thee.

V: Pray for us, O Holy Mother of God.

R: That we may be made worthy of the promises

of Christ.
Let us pray

Thou Who hast had compassion on the affliction of Thy

people, and hast said to the angel striking them, “Stop thy

hand;” for the love of this glorious Star, whose breasts

Thou didst sweetly drink as antidote for our crimes,

grant the assistance of Thy grace, that we may be safely freed

from all pestilence, and from unprovided death; and mercifully

save us from the gulf of eternal perdition: through Thee,

Lord Jesus Christ, King of Glory, who livest and reignest,