If it seems like every time you turn around the dried blood of Saint Januarius is or isn’t liquefying, that’s because such is the case. A miracle is expected to occur with an ampule of the saint’s relic blood three times a year (September 19, the saint’s feast day; the first weekend of May; and December 16).

That last date is noteworthy, commemorating the eruption in 1631 of Mount Vesuvius, lava from which is believed to have been halted from entering the city of Naples by the saint’s intervention.

The failed liquefaction of his blood has always been seen as a sign of impending disaster, whether in Naples, the wider breadth of Italy, or the world.

The blood did not liquefy in 1939, when World War II broke out; nor in 1943, the year the Nazis occupied Italy; nor in 1973, remembered for a bout of cholera in Naples. An epidemic.

Most recently, it failed to liquefy in 1980, when a devastating earthquake struck Irpinia, some 30 miles east of Naples, leaving more than 2,400 people dead.

Now we have a failure a year ago — as coronavirus began to rage worldwide, starting in China and Italy — and also failure this past Thursday (though eventually the blood liquefied, after hours of prayer).

What if anything does this mean? Is it related to “delta” or “omicron,” to anything of the sort, to none of it?

To something else upcoming?

Let us note 1939 was also the year of a great earthquake in Chile.

As for 1973, there was the dedication of the World Trade Center and Watergate hearings, among any number of historic events in the world.

Also called “San Gennaro” (think celebration, Little Italy, New York), the saint — an early bishop — was beheaded during the persecutions by Diocletion in 305 A.D. Legend has it that a woman named Eusabia soaked up his blood with a sponge and preserved it in a glass vial. 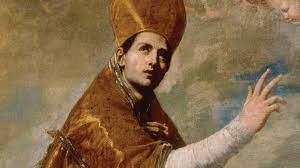 We could get into the other facts — how it is in dry form on the side of now two ampoules until it is shaken or rolled those three times annually (usually by the Naples archbishop) and how some scientists theorize it may be an imitation blood concocted centuries ago with iron oxide and sodium chloride, which with a certain admixture is prone to what they call thixatropic effect, turning liquid when moved.

No, dear scientists, it doesn’t quite seem like that. And most scientists scratch their goatees in befuddlement.

According to the Italian Catholic magazine Famiglia Cristiana, the reliquary with the ampules remains on view for the faithful for eight days, during which they can kiss it while a priest turns it to show that the blood is still liquid. Then it is returned to the safety vault and locked away inside the Chapel of the Treasury of the Cathedral. This has been going on for 630 years!

According to the website storiacity.it, “over the centuries the failed miracle coincided with 22 epidemics, 11 revolutions, three droughts, 14 archbishops death (within a 30-day period), nine dead popes (over a period of a few weeks), four wars, 19 earthquakes, and three religious persecutions,” notes a site called The Seeker.

The relic also remained solid the year Naples elected a communist mayor, adds the Catholic Telegraph — but beguilingly and spontaneously liquefied when Cardinal Terence Cooke of New York visited (in 1978).

This also happened in 2015, while Pope Francis was giving some advice to the religious, priests, and seminarians of Naples (actually the blood half-liquefied, as the Pope handled it.

“The last time the liquefaction occurred before a Pontiff,” says the Telegraph, “was in 1848 with Pius IX. It did not happen when John Paul II visited the city in October 1979 or in the presence of Benedict XVI in October 2007.”

Last Saturday, when the blood decided not to liquefy and the failed miracle was seen as a bad omen, Vincenzo De Gregorio, the Abbott of the Chapel of the Treasure of San Gennaro, said, “We must not think about disasters and calamities. We are men of faith, and we must continue to pray.”

The Vatican takes no stand on the miracle. And while scientists are naturally (and sometimes haughtily) skeptical, the local newspaper Il Mattino wrote, the “failed miracle leaves us with an irrational uneasiness.”