Call this a report from a hurricane zone, for that’s what it is: I sit here, on power from a generator, in the aftermath of what they are now calling the most powerful cyclone — not just hurricane, but cyclone (which includes typhoons) — on this planet since record keeping.

It attained that status, did “Irma,” by remaining as a category-five storm for 37 straight hours and containing as much force as all hurricanes put together during a normal season.

Was it as bad as it appeared on TV?

Certainly, in a few places, such as the Keys — which have been miraculously spared for many decades, considering their precarious location, virtually at sea-level. Some of the keys (though not Key West) are now devastated. Other places that weathermen in their waterproof gear and helmets with rain pelting made into such an apocalypse-now — such as Naples and West Palm Beach — escaped without major catastrophe, and in many neighborhoods, virtually no damage. There was much hype, which can be dangerous next time.

We’re hundreds of miles to the north, halfway between St. Augustine and Daytona Beach, and here precisely because it is one of the lowest-risk areas in Florida, with less a chance of a direct strike than, say Providence, Rhode Island. I made the decision on location after studying hurricanes in 1999 as part of a major project to do with natural disasters, and knew well what could occur, after interviewing many top experts and personally visiting the wreckage left by “Andrew.”

Although the county we are in has never had a recorded direct hurricane landfall, brushed by ‘canes — and more often than Rhode Island, perhaps even Cape Cod — our area can be. And that’s what occurred three times the first year we moved here (2004) and also this year (just now) and last (with “Matthew”).

We don’t rely much on the hype of certain weathermen, but on the regular and more measured reports from the National Hurricane Center.

While we went to a nearby city during “Matthew” (because it threatened to be that first landfall, and as a major hurricane, before wobbling a bit east), that was mainly because we need electricity and we knew it would be out, while “Irma” looked to us like more a tropical storm (which is what it turned out to be, in our area, with winds just under category-one status) and we held out a bit of hope that the power would stay on.

For some of the neighborhoods here it did. But alas, not for us. It feels again like 2001 when I was stranded in Utah after speaking at a church during 9/11.

It is certainly a bit tense as these storms approach, you feel it in the morning, after a “tired” sleep, mainly because of the tall pines and oaks around us, trees that do not bear up as well with the wind as do palms and as a result can cause severe home damage.

We used Holy Water and Blessed Salt around our neighborhood, anointing each tree with holy oil as prayers were said to angels, saints, Jesus. All held their branches. None fell. Hopefully none ever will.

Preparation? We did little more than fill the cars with gas and containers for the generator. Suffice it to say we already had supplies enough for much longer than what a typical hurricane will entail, though no one can predict everything one will need — nor can we hide. 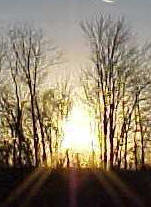 I never aspired to moving to Florida but visited here when we were looking at a number of other states for relocation and was taken — nearly startled — by the strong spiritual feeling (in certain places).

Not to say that it doesn’t have its amusements and fervent materialism and drugs and reckless disregard for nature. We’ve got a Harry Potter park over in Orlando. And a community of spiritualist mediums nearby.

But in recent decades, considering what can happen (and probably will), as a famous hurricane expert, Dr. William Gray, once told me, Florida has been “just unbelievably spared.” It was with “Charley” and “Irma” and “Matthew” and a host of others. Even  “Andrew” could have been far more destructive. In many areas, including ours, you’d never know “Irma” came through, save for the dark signs and occasional utility trucks splicing those wires.

How grossly over-dependent we are on electricity — like addicts in withdrawal without it. How artificial and tenuous, how fragile, is our modern society. I know this too from ice storms and blizzards. We think we have conquered nature when we don’t even understand it — or the Person behind it, Who moves galaxies with a flick of His finger (never mind tropical cyclones).

Imagine for a moment not a few days but months without electricity or gas — and not just in Florida but an entire region or nation.

Or one can view it this way: a storm is His Mercy.

Still a bit of mercy but with recent disasters, more of a toll, as seen in “Harvey.” More of the “justice” aspect. Oh, there is excitement and tension as those first wisps of tropical clouds scud across the horizon with the faint hint of danger, the smell of a rain forest, the lightest drizzle of rain.

Afterward, the wandering about past closed supermarkets emptied of supplies before the storm hit and gas stations that had struggled to keep up with the lines, often having to cover their pumps, and the now-darkened hardware store that remains open but escorts every customer to get what the customer needs and can only accept cash.

Yes, it’s wise to stock up on freeze-dried food and honey and water and chlorine (for water) and canned items, the list is long, and it doesn’t hurt to have hurricane shutters (which we do, but didn’t use this time).

Wise things. We have them. We recommend you always have enough to live on for several weeks, if not months. You discern.

But hurricanes teach simplicity, which is a very good thing — simplicity and quiet are conducive to prayer — and for us the best preparation remained the simplest: blessing each tree with oil, and looking way up beyond the clouds.