An article from a Catholic news outlet:

“Washington D.C., Dec 8, 2017 / 05:01 p.m. — With the blessing of its final mosaic, America’s Basilica – The National Shrine of the Immaculate Conception in Washington, D.C. – is finally complete after nearly a century of construction and adornment.

“’This magnificent tribute in stone, glass, marble mosaic to Mary, Mother of Jesus, Mother of God and our Mother, invites all of us to recognize not only the special role of Mary in our life but the unique glory that is hers in her Immaculate Conception,’ said Cardinal Donald Wuerl of Washington in his Dec. 8 homily before the dedication of the basilica’s new Trinity Dome mosaic.”

Yet one can ask: Is the basilica really complete — without a Virgin representing the U.S.?

Nowhere in its gallery of Marian chapels representing her in various places around the world (in the crypt level) is there one for America. There is the Virgin of  Pontmain, France; there is one dedicated to an alleged apparition to a Hindu in Vailankannl, India; there is one representing Our Lady of Antipolo, Philippines, and Mariazell, Austria, Our Lady of Ta’ Pinu, and Our Lady of Bistrica in Croatia — there is a little shrine dedicated to an appearance of the Virgin in Brezje, Slovenia. Those are great. Guadalupe is there, representing a continent. [Picture above from Catholic World Report.] But:

Where is the United States?

Just seven years ago, the first approval was granted to an appearance of Mary at Champion, Wisconsin in 1859. She is known there as “Our Lady of Good Help.” Can she at least have a place in the august gallery — flagship of American Catholicism? 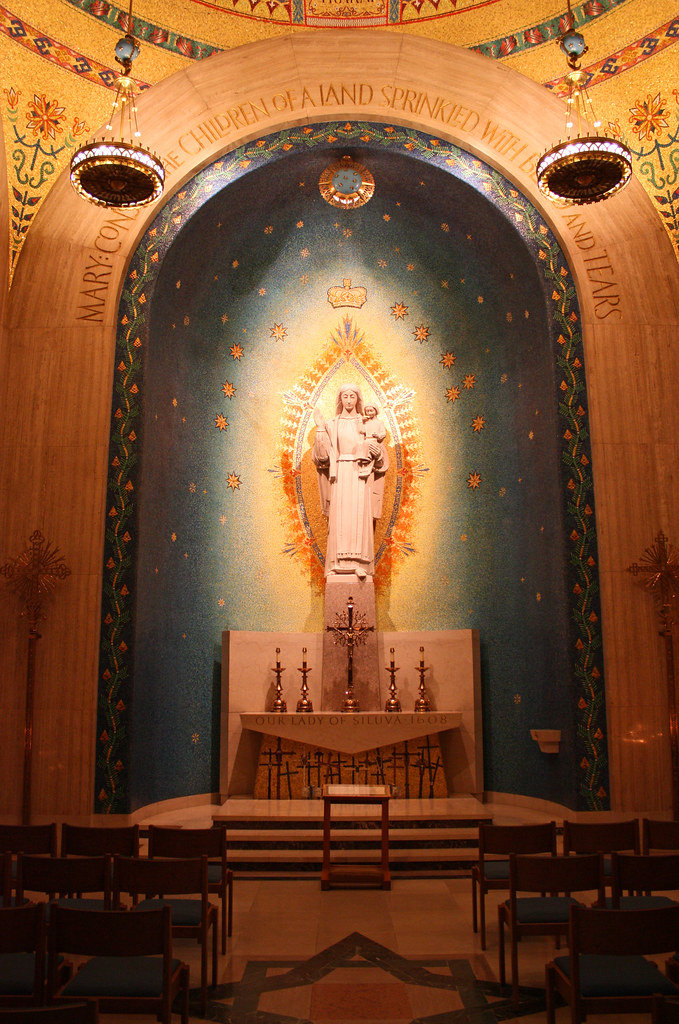 And more to the point, we recall the apparitions — the alleged apparitions (for there was no similar full approval, though there was partial approbation from an archbishop) to Sister Mary Ephrem Neuzil of Fostoria, Ohio.

“Our Lady asked me to draw a picture of her first appearance,” wrote Sister Neuzil. “She also requested a statue made to this likeness and placed, after being solemnly carried in procession, in the Shrine of the Immaculate Conception in Washington, D.C. She wishes to be honored there in a special way as ‘Our Lady of America,’ the Immaculate Virgin.” It is an apparition that also drew support from then-St. Louis prelate (and later Vatican official) Archbishop Raymond L. Burke.

“The hour grows late,” the Virgin had once told Sister Neuzil. “Tell the bishops of the United States, my loyal sons, of my desires and how I wish them to be carried out. Will my loyal sons carry out my desires and thus help me bring the peace of Christ once again to mankind?”

If we went back to her Immaculate Heart, said Mary, according to this revelation, there would be mercy. There would be a new spring. If not, there would be “suffering and anguish.” Our Lady promised that greater miracles than those granted at Lourdes and Fatima would be granted here in America, the United States in particular, if we did as she desires," said Sister Neuzil in a booklet of her messages, which was edited by the archbishop.

The shrine was to become a center of spiritual miracles (of conversion) and the country a beacon to the rest of the world — not just an economic, military, and political superpower, but also a spiritual superpower. That of course has not occurred. 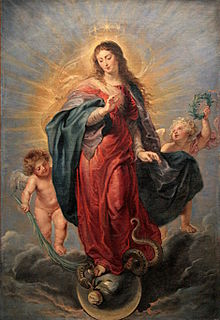 "Behold, O my children, the tears of your Mother!" Mary putatively told the nun.

"Shall I weep in vain? Assuage the sorrow of my Heart over the ingratitude of sinful men by the love and chasteness of your lives. Will you do this for me, beloved children -- or will you allow your Mother to weep in vain?"

The question remains open, at a time when bishops are often frosty toward the mystical element. There are no signs of movement that we know of in the direction of this apparition.

“Our Lady of America has herself pledged to be our safeguard,” said Anita Marovich of Tenafly, New Jersey years back, when she organized a petition to the basilica rector. “Her statue in our National Shrine will be a safeguard for our nation, for she has warned that, because of her special calling to the people of America, the forces of evil will be focused on our land, and the threat of chastisement for the many transgressions of our nation hangs heavily over us. Our Lady often spoke to Sister that much of this effort would be in the hands of the laity and it would be the cries of her children in America that would move the bishops to fulfill her desires, at last.”

[resources: Our Lady of America: Our Hope for the States, for discernment]