This is a good question.

It certainly has currency.

For we see in the news that 1) the war between Russian and Ukraine is as violent as ever and 2) there is no end in sight — in fact, there are some signs that it may last longer with more brutality than anticipated.

So what to think?

Were not Russia and Ukraine consecrated to the Immaculate Heart of Mary — for the first time, in strict legalistic accordance with the Fatima requests, with Russia named and bishops around the world participating — back on March 25?

Here it is useful to recall that, according to the visionary Sister Lucia dos Santos, a previous consecration by Pope Saint John Paul II on the same March 25 date, but in 1984, prevented what she termed an “atomic [nuclear] war” from erupting “in 1985,” a year after that Consecration.

The effect wasn’t obvious (the public was totally unaware of any such close call) but extremely significant. This occurred despite a Consecration many criticized for not citing Russia by name (something the diplomatic corps at the Vatican has long argued against doing). 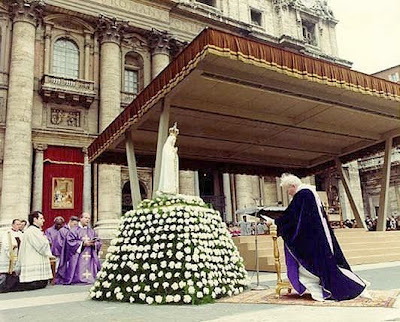 Fast forward to the present, and now other question, most obviously whether the March 25, 2022, Consecration will also have a major if unseen effect. Indeed, in an atmosphere of threats from Russia to use nuclear weapons, has the prayer prevented such an exchange already?

We have no way of knowing.

Remember, also, that collapse of Communism and dismantling of the evil Soviet Union began five years after the 1984 Consecration, beginning in 1989. Thus: effects may not be visible or immediate. Time tells.

In the meantime, while the current Pope has fulfilled the Fatima request, the question is whether the rest of the Church — with regard to her second requirement for the conversion of Russia (the Five First Saturdays  of Mass, Confession, and a Rosary) has fulfilled its duty.

Have those who long have criticized Popes for not technically meeting the Consecration requirement themselves answered Our Lady’s request at Fatima (actually, to Lucia at Tuy, Spain)? Vladimir Putin — a man of many rumors and many threats — says to watch out: he has only just begun. He continues to rattle sabers. The U.S., whose intelligence services did a remarkable job forecasting the war, believes he still intends (does Vladimir the Christian) to conquer (and if not that, annihilate) Kyiv.

Mary says in her most recent message, “I am with you also in these days when Satan is fighting for war and hatred. Division is strong and evil is at work in man as never before.”

Have you not noticed how everything — whether a pandemic, or economic theory, or Court decisions, or proposed legislation, or vaccines, or elections, or shooting — is a source of acute wrangling?

Divide and conquer, is the devil’s plan.

Our Lady’s is: pray (First Saturdays!) and unite.

[resources: The Flower of Fatima]

“As for the conversion of Russia, the anemic and tardy response by the Church to Our Lady’s request did eventually result in the conversion of Russia, when, to the astonishment of the entire world, the atheistic Soviet empire collapsed and peacefully vanished thirty years ago; Leningrad reverted to being St. Petersburg, Christianity in Russia returned, the Berlin Wall came down,  and a whole generation enjoyed the freedom to practice the faith not only in Russia but in all the former Soviet satellites, such as Poland and Ukraine.
“Just as Our Lady of Lourdes requested ‘Penance! Penance! Penance!’ to mitigate punishment due to the generations of that time in history, more relevant today is the message of Akita, which again is linked to the need for conversion, penance, and reparation for the sins of the world, in an age of nuclear weapons and a truly diabolical culture that is being spread by the Western countries, via the rainbow colonization of the world [pornography, hate-politics, and materialism]. The only thing the Church can do is penance and reparation, as we learn from Scripture, sackcloth and ashes.
“As we read in the Old Testament (Ahab’s Repentance):

“’There was none who sold himself to do what was evil in the sight of the Lord like Ahab, whom Jezebel his wife incited. He acted very abominably in going after idols, as the Amorites had done, whom the Lord cast out before the people of Israel.’

“And when Ahab heard those words, he tore his clothes and put sackcloth on his flesh and fasted and lay in sackcloth and went about dejectedly. And the word of the Lord came to Elijah the Tishbite, saying, ‘Have you seen how Ahab has humbled himself before me? Because he has humbled himself before me, I will not bring the disaster in his days; but in his son’s days I will bring the disaster upon his house’ (1 Kings 21:25-29).”