It’s an intriguing concept — that the famous period said to have been given Satan for extended power may have started at a time different than what many have assumed. In fact, at least two such periods have been the subject of major Catholic prophecies.

There is first and foremost Pope Leo XIII, who urgently and famously revised the Prayer to the Archangel Michael after a reputed vision sometime between 1884 and 1886 during which it was indicated to him that the devil would have enhanced powers to attack the Mother Church of Christianity for “75 to 100 years.” Details are sometimes disputed, but it was apparently after this private “prompt” that the prayer’s liturgical placement was initiated.

What the Pope heard is usually recounted as follows:

Satan says to Jesus: “I can destroy your Church.”
Jesus replies: “You can? Then go ahead and do so.”
Satan: “To do so, I need more time and more power.”
Jesus: “How much time? How much power?
Satan: “75 to 100 years, and a greater power over those who will give themselves over to my service.”
Jesus: “You have the time, you will have the power. Do with them what you will.” 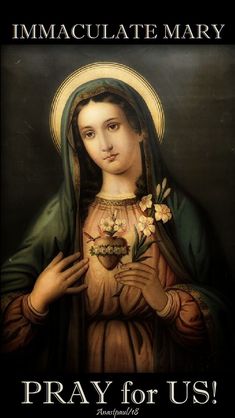 Now if that’s true and if the clock started ticking on October 13, 1884 — the most popularly accepted date for the papal locution/vision — that means if we hold Heaven to human calendars (as opposed to figures of speech) the period ended forty years ago, in 1984. And it certainly can be argued that this time span included decidedly unusually horrific, historic events.

The Twentieth Century, from World War One on, was full of evil, with Hollywood and public lasciviousness in the Roaring Twenties, rock-and-roll starting up in the 1950s, cultural upheaval in the notorious Sixties, and legalized abortion in the early 1970s, followed by an explosion of the occult, wayward sexuality, and unprecedented materialism that has gained momentum through every decade since.

But: what if the clock didn’t start exactly in 1884 (or 1886)? What if, for example, the period cited by Leo XIII began with the Roaring Twenties or the 1930s (when Russia was starving to death three to ten million Ukrainians), or in the 1940s (which saw the peaks of Hitler, World War Two, the Nazi Holocaust, and Hiroshima)?

If the starting block was the 1920s, and the period was just seventy-five years, it already has ended.

If the period Leo XIII was forewarned about was a “hundred” years (and if a hundred years was not just a figure of speech): well, holding God to human calculus, it means it continues substantially into the current decade.

This is known as legalism and is more an exercise in curious theo-mysticism than spiritual pursuit.

But it does bear relevance.

If the period is a hundred years, this decade will see the peak — pitched battle — at some point in the near future, and in fact one can also point to Medjugorje, where the last monthly message, on June 25, 2022, said, “Little children, I am with you also in these days when Satan is fighting for war and hatred. Division is strong and evil is at work in man as never before.” “As never before” means either that the extended evil foreseen by Pope Leo XIII has not yet ended or that it’s even worse now than when the Leonine century ended.

(Is there a chronologist in the house?)

Also at Medjugorje, it was said the extended power of Satan would not end until the first secret occurs, breaking his hold. That too remains in the future — near or distant, we can’t know.

Leo never did give a starting year. It has been assumed that it was right from his 1884 or 1886 vision. But to take this exercise a step further, what if the period, if accurately described, began in the 1930s?

That would mean we have the next decade, the 2030s, is the crescendo.

If we believe the mystic Anne Catherine Emmerich, noted Forums of the Virgin Mary, “the liberation of Lucifer was decreed fifty or sixty years before 2000, for a time. In other words, the liberation would have been between 1940 and 1950. But Emmerich says that some demons are going to be released first so they can prepare the way for full release of Satan himself. This is written in the book The Painful Passion of Our Lord Jesus Christ.”

Realize there are even multiple human calendars.

As we wrote years ago, Emmerich put it this way: ‘The dates of many other events were pointed out to me which I do not remember; but a certain number of demons are to be let loose much earlier than Lucifer, in order to tempt men, and to serve as instruments of the Divine vengeance. I should think that some must be loosened even in the present day, and others will be set free in a short time.'”

Thus it has never been clear when this general frame of time — the period of testing — would begin. Pope Leo didn’t say. Neither does Medjugorje. If Emmerich is right, it began around 1950 — precisely when a great wave of evil, again in the form of cultural revolution, was germinating in the U.S. and soon to sweep the world (and Church). And that particular time period is over.

But the darkness certainly is not.

The idea that, if anything, evil is more rampant than ever, as stated at Medjugorje, is the salient point. Can humans judge that?

One has to look at the hearts of all men (not just Hitler, Mao, Idi Amin, or Pol Pot), and only God can do this; only God knows when darkness has been at its worst. Imagine that the test of the Church announced by Pope Leo began not in 1884 or 1886 but in 1950 — about the time a flood of (excuse the expression) demonized priests entered seminaries and began abusing young men and sometimes children. What, in two thousand years, has tested the Church more than the abuse crisis?

The Emmerich message also connects in an electrical way to a message given to a second Medjugorje seer, Marija Pavlovic Lunetti, who on January 1st, 2001, during an apparition on Podbrdo (Apparition Hill) at Medjugorje, reported that “tonight when Our Lady came, I recommended all of us, our intentions, and all the sick people present here.

“Our Lady prayed over us and she blessed us. Our Lady was joyful and she came with five angels. She gave a message: ‘Tonight in a special way I desired you to be here. In a special way now when Satan is free from chains, I invite you to consecrate yourselves to my Heart and to the Heart of my Son.”

The expression “free from chains” is identical to Emmerich’s use of the term “unchained” — confirming, one could argue, that the trial is in progress.

[Footnote: mailbag, Joel Keene:
“It needs 1940 plus 75 years = 2015” added to jive with average calculation after it of “1950 plus 100 years = 2050, average endpoint = 2033”
“Maximum 1950 plus 100 years = 2050
“Average end point = 2033]
+
[Footnote: mailbag from viewer P. R. Suth:+
+
“I just read your article about Garabandal, ‘a small council’ or ‘synod’ and its association with the [alleged] ‘Warning.’  I’m not sure if you saw the ‘Grace Force’ video with Father Chad Ripperger a few months ago or not, but he relayed a story that a demon kept crying during an exorcism, and when he asked why it was crying the demon replied, ‘Because He’s about to take our power away.’ Father Ripperger said that ‘He’ was in reference to God and the context was within the Church, not the world, although as the Church goes so the world goes…
+
“I know another exorcist who shall remain anonymous but he performs exorcisms regularly on a possessed individual and the demon continues to say, ‘It’s all about to come crashing down,’ over and over.  When pressed, the demon [reportedly] says that it will happen ‘by September’ but will not say what ‘it’ is — only that ‘it’s all about to come crashing down.’ Again, the exorcist in this particular circumstance feels that it is something within the Church that will have an impact on the world.
+
“Lastly, I reached out to another exorcist, who is close to Father Ripperger, and asked about this and he said that the devil is a liar and he doesn’t take much of anything that he says during an exorcism seriously.
+
“Things are definitely heating up with rumors swirling about Francis’…  possible “retirement” (even though he seemed to categorically deny it last weekend) and the upcoming consistory in August.  Consistories traditionally take place in November. Could something happen in conjunction with the consistory in August?  If so, that would be ‘by September.’ Francis is supposed to pay a visit to the tomb of Pope St. Celestine during the consistory in August, just as Benedict XVI did prior to ‘retiring’ from the papacy…
+
“I personally think that things will get much worse before they get any better but…didn’t the young Mexican mystic say something about the ‘Warning’ which will be followed by nuclear war and complete chaos and eventual desolation? Food for thought.”
++
That was a young girl in Mexico City who was the focus a while ago of a “special report,” and whose dramatic prophecies we obviously cannot authenticate. Do be cautious.]+
————————————-
[Footnote: on another subject, how about this “AI” re-creation of the Virgin’s face as in the Guadalupe tilma? 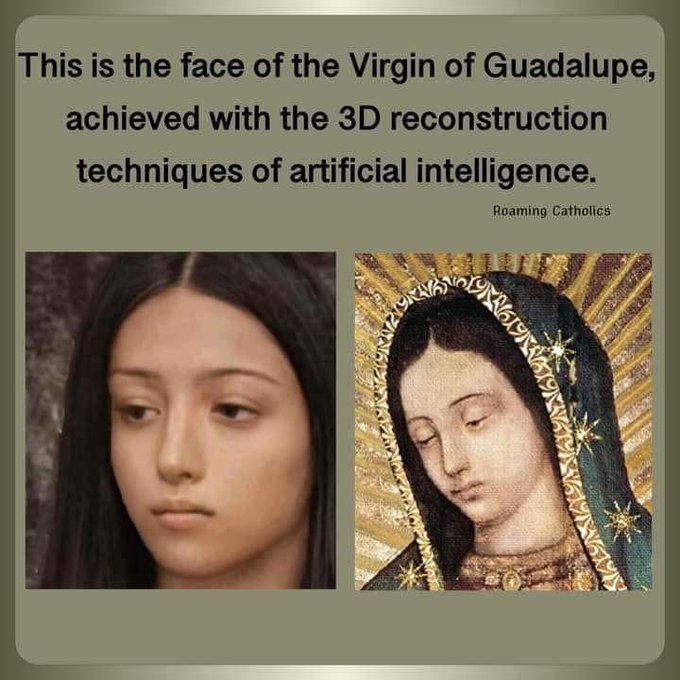 We’ll simply stick with the original.

It’s clear enough for us.]

[Footnote: “In a special way now, my dear children, I invite you to be close to me through your prayers,” the Blessed Mother of Medjugorje added. “Carry blessed objects with you. Put them in your homes, and restore the use of Holy Water.”]