Oh, the deep mysticism of Teresa of Avila!

And how she draws us through that depth to the high places of the Lord.

How much better to read her writings than those of the worldly religious.

“I was in a monastery of the Order of the glorious Saint Dominic, thinking of the many sins which in times past I had confessed in that house and of other things concerning my wicked life, when there came upon me a rapture so vehement that it nearly drew me forth out of myself altogether,” Teresa recalled in her autobiography. It was the feast of the Assumption. “I sat down and I remember even now that I could neither see the Elevation nor hear Mass being said, and later this caused me concern out of scruple.

“While in this state, I thought I saw myself being clothed in a garment of great whiteness and brightness. At first I could not see who was clothing me, but later I saw Our Lady on my right hand and my father Saint Joseph on my left, and it was they who were putting that garment on me.

“I was given to understand that I was now cleansed of my sins,” she continued — reminding us of other accounts of Heaven (whereby pristine robes are worn by those who have journeyed to the other side). “When the clothing was ended, and I was experiencing the greatest joy and bliss, I thought that Our Lady suddenly took me by the hands and told me that I was giving her great pleasure by serving Saint Joseph” [our italics].

The rapture is believed to have occurred during 1561 in the chapel known as Santisimo Cristo in the church of Saint Thomas, in Avila, Spain. There she was also instructed, despite her inclinations, on obedience to the bishop. Whatever her own desire or plans, she said, this was what was pleasing to the Lord — and what eventually bore fruit (for the Lord worked through the Church procedure).

She also was shown hell (as were the seers of Fátima).

“My feelings,” she said, “I think, could not possibly be exaggerated, nor can anyone understand them. I felt a fire within my soul the nature of which I am utterly incapable of describing. My bodily sufferings were so intolerable that, though in my life I have endured the severest sufferings of this kind — the worst it is possible to endure, the doctors say, such as the shrinking of the nerves during my paralysis and many divers more, some of them, as I have said, caused by the devil — none of them is of the smallest account by comparison with what I felt then, to say nothing of the knowledge that they could be endless and never ceasing.

“In that pestilential spot, where I was quite powerless to hope for comfort, it was impossible to sit or lie, for there was no room to do so.

“I had been put in this place which looked like a hole in the wall, and those very walls, so terrible to the sight, bore down upon me and completely stifled me. There was no light and everything was in the blackest darkness.”

The devil? How many guises he has! How he plays both sides of every fence!

In a time of spiritual warfare, the saint told herself (and through her self-admonition, told us), “If this Lord is powerful, as I see He is, and if the devils are His slaves (and of that there can be no doubt, for it is an article of the Faith), what harm can they do to me, who am a servant of this Lord and King?

“How can I fail to have to have fortitude enough to fight all hell?

“So I took a Cross in my hand, and it really seemed that God was giving me courage,” she wrote. “In a short time I found I was another person and I should not have been afraid to wrestle with devils, for with the aid of that Cross I believed I could vanquish them all.” “These devils keep us in terror because we make ourselves liable to be terrorized by contracting other attachments — to honors, for example, and to possessions and pleasures.” One might add: to church chatter instead of devotion in church. To politics instead of the Catholic essence.

“When this happens,” said Saint Teresa, referring to worldly attachments, “[the devils] join forces with us — since, by loving and desiring what we ought to hate, we become our own enemies — and they will do us much harm. We make them fight against us with our own weapons, which we put into their hands when we ought to be using them in our own defense.

“That is the great pity of it. If only we will hate everything for God’s sake and embrace the Cross and try to serve Him in truth, the devil will fly from these truths as from the plague.”

Plague seems like a good thing to flee from these days.

Let the devil wallow in that, instead of ourselves: plague.

Oh, that we free ourselves, Lord, from the angst of religious trivia!

“Not a fig shall I care for all the devils in hell.

“It is they who will fear me.”

[resources: books and booklets of devotion] 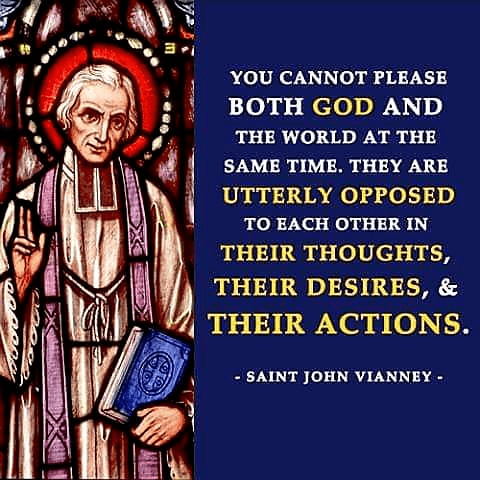