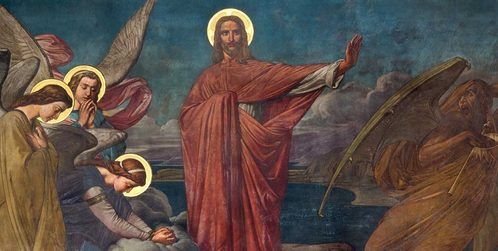 This week Mass readings have focused much on Jesus healing by casting out demons. Have you noticed how often the reading is about this — deliverance, healing — but how frequently (and unfortunately) the sermon that follows sidesteps this aspect?

Jesus didn’t just heal. He healed, in many cases, perhaps the large majority, by ridding darkness from the person.

Two “takeaways” (to use the current vernacular): His power. When we have Jesus next to us, in front of us, behind us — when we beseech Him (as always we should; as daily if not hourly if not more frequently we should) — anything is possible if He so wills, and darkness, if we are really focused on Him, if we are purifying (being “made clean”), has far less opportunity to infest, sicken, or harass.

The second: wrong spirits sully us. Make us dirty. We dirty ourselves with sin.

The reading for Wednesday (January 11, 2023): “When it was evening, after sunset, they brought to him all who were ill or possessed by demons. The whole town was gathered at the door. He cured many who were sick with various diseases, and he drove out many demons, not permitting them to speak because they knew him” (Mark: 1:29-39).

The reading for Tuesday (January 10, 2023): “In their synagogue was a man with an unclean spirit; he cried out, ‘What have you to do with us, Jesus of Nazareth? Have you come to destroy us? I know who you are—the Holy One of God!’ Jesus rebuked him and said, ‘Quiet! Come out of him!'” (Mark 1:23-26), and just like that, with a loud cry, the dark spirit was gone.

Darkness is behind much physical illness, and perhaps even more so, mental issues. Paper thin is the line between a psychiatric malady and a spiritual one.
+
From the mail: “You might remember that I did extensive work with survivors of Satanic Ritual Abuse,” writes a viewer from northwest Indiana, a licensed clinical social worker who prefers to keep her name out of it. “I initially did not know about the phenomenon and was extremely skeptical when I began to hear about it.
+
“As I developed skills for working with such, I once witnessed a demonic entity leave a client. However, because of this work, I developed an understanding that many psychiatric diagnoses have a demonic entity that attaches to the individual sufferer of anxiety, depression, etcetera, and the maladaptive use of defense mechanisms is the cause, fixed in place by these attachments, which generate a dysfunctional cognitive belief structure inside which they hide.
+
“A large and pretty successful treatment approach I have used for many years involves awakening the client to the presence of negative spiritual attachments — spiritual parasites — and with awareness, the client is free to withdraw the unconscious permission they had granted to these entities (usually in early childhood), and when released to Our Lord Jesus, this frees the client of the troublesome behaviors.
+
“As well as the above mentioned are other disorders such as addictions, suicidal ideations, urges. I don’t usually speak about this approach because as a deeply committed Catholic, most people would likely disapprove of exorcism by a layperson. It is important to note I did not perform an exorcism. The client would close their eyes and see dark clouds  (or “attachments”). Saw quite a few survivors of Ritual Abuse –– even before  I knew about it. (Didn’t plant false memories.) As I look back, I can many, many more that I didn’t recognize the subtle signs. There’s more than you can possibly imagine. I learned never to engage directly with the demonic. They are much smarter than I.”
+
As for formal exorcism: no, a layman cannot perform this. But deliverance from evil spirits?
+
We all pray deliverance at the end of the Lord’s Prayer (“deliver us from evil”), and Jesus not only said His disciples should cast out spirits, but said this was how — by their casting out of spirits! — that He would know them (Mark 16: “Whoever believes and is baptized will be saved, but whoever does not believe will be condemned. And these signs will accompany those who believe: in My name they will cast out demons.”)
+
Do we properly hear? Do we digest the Bible, instead of merely listening?
+

If so we know that with Christ, we can be freed from anything.