In his electrical comments decades ago to a radio interviewer, Cardinal Josef Ratzinger left us with a phrase that now seems like a comet blazing across the horizon of Catholicism. In speaking in 1969 (you read that right) about those who will prove true to the Faith — and how they will be winnowed — he used the phrase “Trial of the Sifting.”

We’ll be further investigating that term in coming days, for it is dramatic and appears to be occurring all around us — this separating of wheat and chaff. The future Pope was making the point that in times to come the Church would shrink but become more authentic, casting off those who are angry, disobedient, sectarian, prideful, divisive, polarized, or subversive, while retaining those who “live from the pure fullness of their faith,” avoiding politics and “slogans of the day.” Remember, this is a man who would become perhaps the most conservative Pope in almost a century.

“It will not include,” said Cardinal Ratzinger, of the future Church, “those who accommodate themselves merely to the passing moment, or from those who criticize others and assume that they themselves are infallible measuring rods.” 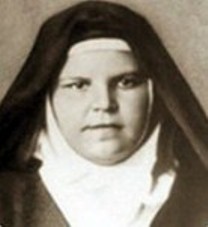 Let’s take one of the themes in the sifting: humility and obedience, at this time in history when so many totter on one edge or the other of cultural spectra. In that regard, a future saint set a tremendous example. Few are those who taught and exemplified that virtue more than Maryam of Bethlehem (also known as “The Little Arab”).

In a new, powerful little book by that very title (get this one), the well-known writer Sister Emmanuel Maillard runs down the life and profound lessons of Maryam, who was born the year of LaSalette — 1846 — and died at thirty-three on August 26, 1878, in Bethlehem (shortly after the birth of Thérèse the Little Flower). This was a  mystic on the order of Thérèse and Teresa of Avila. According to her fellow Carmelites of Bethlehem, she spent hours and sometimes entire days in ecstasy.

At one point she was called to battle Satan for forty days, the devil trying to evoke complaint in her. He failed utterly. “He didn’t even succeed in getting her to say simply, ‘I’m suffering, I can’t do it anymore,'” notes Sister Emmanuel.

Instead, the little saint said simply, “Lord, I offer you all this pain for the Church, for the holiness of priests, for souls in distress, for souls who are lost,” etcetera, with each new suffering.

In a future installment, we’ll discuss her incredible visits to Heaven, hell, and purgatory.

But the issue for today was her direct combat with the devil — combat won not with hubris or truculent debate but with something in desperately short supply during the current era: humbleness. That humility “diminished the forces of Satan,” notes Sister Emmanuel, “and covered him with confusion.”

When attacked during ecstasy, those around Maryam could hear her saying, “I unite myself to Jesus and Mary. I offer my suffering for those who are against the Church. Blessed be my God!” Instead of complaint, instead of criticism and gossip, instead of commentary: blessings addressed to God. That’s what sent Satan reeling.

“So, Satan continued, under orders from the Lord, to reveal to Maryam and to her whole community his sordid tactics and things about himself,” writes Sister Emmanuel, who lives in Medjugorje but has visited the convent where the Little Arab lived. Forced to reveal the secrets of defeating him and his minions, the devil acknowledged that “the three most powerful things against us are charity, humility, and obedience.”

“He added, ‘I am the Tempter. I do what I want. I sow division everywhere.‘”

The “trial of the sifting,” then, is like the pan that gold miners used, shaking out the pebbles, dirt, and sand — the disobedience, the dissension — and looking for nuggets. “I am nothing but sin, but I hope in the mercy of God,” said the little saint — the kind of saint (currently, beatified) who will form the future, simpler, purer Church, one can presume, according to Ratzinger. It will be built not by theologians but by “saints,” he predicted.

Do we wish to belong to that Church or the political whimsies of the day?

Do we want to be “nuggets” in the pan or wet sand?

Hearing the Little Arab’s incredible humility, the devil cried out, “A little nobody will triumph over us. That’s impossible!”

“‘Humility has joy in this world and in the next.'”

She also said, “Humility doesn’t get upset about anything; it is content with everything.”

That is, it suffers with patience and offers that suffering up.

At one point Jesus showed Maryam the netherworld. “There are in hell all kinds of virtues, but there is no humility,” the Lord reportedly told her. “In  Heaven, there are all kinds of faults, but no pride.”

And so we have lessons for the “sifting” that is now so ramped up and upon us.

“The Church will be a more spiritual Church, not presuming upon a political mandate,” wrote Benedict XVI in 1969. “In faith and prayer she will again recognize the sacraments as the worship of God and not as a subject for liturgical scholarship.”