Have you ever wondered about those “tares” in the Bible — the passage in which Jesus explains how the enemy came during the night and planted the seeds of weeds (tares) among the wheat?

The question: why would the Lord allow the tares to grow alongside the wheat until the end of the age — until judgment, until it’s time to gather in the crop?

“Allow both to grow together until the harvest; and in the time of the harvest I will say to the reapers, ‘First gather up the tares and bind them in bundles to burn them up; but gather the wheat into my barn,”’ He states (Matthew 13:36; see also, 13:24).

The explanation may be rather simple: though they are unwanted weeds, tares look nearly exactly like wheat until they near maturity — until they develop their husks, until their fruit is apparent.

And so it is with us: 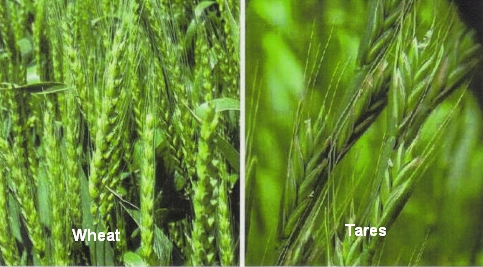 God allows the good and evil alike to mature, to grow alongside one another — allows it to rain on both the righteous and wrongdoers, for the wind to howl against all — but separates them, tares from grain — grain, as in the bread of life — in the end.

This gets to the topic of fruits and how we know them (Matthew 7). A key component: patience. Wait until you see if it’s a weed or is producing husks.

Only then do you know the essence. If you yank out a tare when young, it also could uproot the wheat next to it.

We judge that by asking certain questions:

How does a situation or person make you feel afterward?

What are the fruits in your emotions?

Are you happy, glad, uplifted, perhaps at times even joyful. or subdued, even sullen, oppressed, depressed, morose, or deflated after interacting with someone?

It’s the same with music. The questions one writer asks in this regard: “Does the music inspire you and draw you closer to the Lord to be good and do good things and have a good effect? Or does it destroy you, shatter you, oppress you, make you feel rebellious, hateful, angry and destructive and want to hurt and destroy and do evil things?

The devil’s music, on the other hand, he points out, is deafening, noisy, like the sounds of something that wants to destroy, pulsating insistently, almost violently, in your face, tapping into carnality, causing the spirit and body to throb with wrong passion. Watch out for things or people that do that!

It comes down to: What does something or someone provoke inside you? What kind of action or thought does it generate?

“Another kind of evil is just as bad,” noted this writer, asking addition questions. “Does it lull you to sleep, indifference, inaction, carelessness, indolence, negligence and zombic stupor? If the devil can’t inspire you to take actual negative action and do his violent will, he’ll try to put you to sleep and put you out of action…”

We draw forth the lesson: it’s often difficult or even impossible to tell good from evil until it matures, until we can see the husks, until we can observe flowers or fruit or lack thereof — until we taste or smell it and observe the effects.

And so it is that we discern.

A little difference makes a big difference, and comes out in the wash.