We all can go “overboard” with anything. There are always two extremes. A person can be totally oblivious to underlying spiritual problems; at the opposite extreme, a person can become almost paranoid. One must always pray for balance, for there is no discernment without an even mind. That word yet again: balance.

And so what is one to think, in this regard, about scented candles, which are in such wide use? What possibly could be wrong with those?

We’re not sure anything. This is asked, however, because in going back through a book about the late Irish mystic and deliverance expert, John Gillespie, we had noted his account of a spirit-plagued house he said was thusly afflicted due to faceless angels [see story here] the owner had.

In that same section Gillespie, now deceased (subject of a book by Dr. Brian O’Hare entitled The Miracle Ship), also warned about such candles, recounting, in this regard, the case of a woman with severe breathing problems who sought his healing. A doctor hadn’t been able to touch lung distress, which seemed to go beyond normal asthma.

“Now, when you go into a doctor’s with a problem like that, he’ll examine you and tell you the problem is physical,” John had told Dr. O’Hare. “But when people like me are approached, we first have to distinguish, through asking God for the Word of Knowledge and the power to discern, whether the illness is, in fact, a physical one, or if there is a spiritual force behind it. That’s something we always have to do.”

In that case, though he had never before met the woman, recalled Gillespie, he had received the image of scented candles. “So I asked her if she had any scented candles in the house,” he said. “She was surprised. ‘Oh, how did you know that?’ she said. ‘Yes, I have the house full of them. I love them.”

Disbelieving him at first, Gillespie explained that some candles — like faceless angels; not all, but some — have been “chanted over” by occultists. This can also be the case with essential oils from New Age sources.

“I told her she would have to throw them all out and I gave her some prayers to say for her healing and a ‘wee’ blessing to pray over her house,” he said. “She went home and did what I told her and she was able to phone me a day or two later to tell me that she was completely healed.” 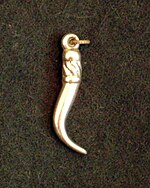 One can raise this question: might it not have been the chemicals, the paraffin, in the candles that caused this woman’s woe? Might not simple smoke from them have affected her in a sheerly physiological way?

We don’t pretend to know such final answers. Gillespie insisted it was spiritual — as is also the case especially with objects people buy or that are given to them for “good luck.” “People talk about being frightened when I say these things,” intoned Gillespie, “No need to be frightened; just get rid of the things and you’ll be free of them. The most frightening thing is ignorance because that leaves you vulnerable.”

Many boobytraps, on this planet called earth!

Those we can discern: stay clear. Replace them with the Crucifix.