Everyone agrees that television can bring evil into the home. That’s a given. Crime. Horror stories. Ghost hunters. Sexual content. Any form of the occult. Harsh political rhetoric.

But what about the medium of TV in general: Is there something about its technological essence that creates an unhealthy, and perhaps even unholy, atmosphere? (Satan is “prince of the power of the air,” says Ephesians 2:2.)

Years back, we remember a series of photos taken at Christmastime and showing amazing streaks of light — inexplicable radiation — from a television set (tuned, the sender explained, to the wrong channel).

Or doesn’t that matter? Are TV and radio conveyors of spirits regardless of content? Satan also fell as a bolt of lightning — electricity. Does he have an inherent ability to use such current?

We consider many perspectives — however “wild,” on the surface, they seem, and especially at this time when folks seem so negatively affected by what’s on TV, the internet, podcasts, and radio.

Not in the mind of a man named Christian Andréason who had a near-death experience and returned with what he says is a spiritual hypersensitivity.

“If there is one thing I would like to tell the world about how dark energy travels in mass it is this,” he writes in a post: “Satanic energy moves via frequency and electrical current.

“What the satanic energy wants us to remain unaware of is, many low frequencies can enter our homes through television, radio, and other forms of electrical waves. These then ring a tone in the upper atmosphere of the space and draw (or call out to) local low vibrational entities or dark spirits nearby and summon them like nothing else can.

Of all the culprits, he claims. “I find that TV can be among the very worst offenders giving rapid transport of dark energy into our homes!”

If nothing else, food for thought — discernment. If to a lesser extent, the same might be true, one surmises, of computers and cell phones, unless the content is edifying and the device is not live-streaming (making it more like simply reading).

“Letting the TV play excessively in your home is like opening up the front door and calling out to anyone who would like to come in and stomp mud through your house — then leaving it for you to clean up all by yourself,” opines Christian. “Not a good idea!” He says devices run on batteries or video replay tend to channel less negative energy.

Even wrong kinds of religious programming can present issues.

But again: Is the “medium the message”? Is the very invention somehow diabolical?

We explored that during a “special report” a while ago, which was mostly about television shows and the dark sides of celebrities — conferred to idol status, as they are, by the electrical “magic” — but also mentioned similar theories on the medium of TV itself.

One author, Stefan Andriopoulos, argued that beyond or behind what we see is the very occult nature of television itself.

In a book called Ghostly Apparitions, Andriopoulos points out that the name “television” indicates a technical device for seeing at a distance, which is known in parapsychology as “clairvoyance.”

Is television mimicking, or in a fashion trying to artificially re-create, that alleged occult capability?

Maybe. Maybe not. Television can certainly have beneficial effects. But the book puts television into a lineage of other “optical media” that go back at least as far as the Renaissance and experiments involving “technologically-induced illusions” effected with magic lanterns, concave mirrors, disorienting walls of smoke (see Oz), and other “apparitions” or phantasmagoric projections created by specialty devices to create illusions. If nothing else, a magical box it is. 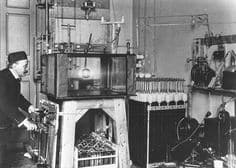 Adds Andréason (who admittedly ventures into psychic realms we do not), “Christ’s Love kept in perpetual action is always the best and most supreme method to maintain a house, keeping it safe from unwanted dark energy!

“I myself try to go long periods of keeping the television off. With frequency being dangerous enough, the negative thoughts and bombastic energy that others thoughtlessly put out there for us to be influenced by can drag us down. When you do watch TV, I would recommend that you mute the commercials unless there is something you are interested in and want to see. With the news, be especially careful! Lots of negative seeds can be planted there.

“Be very careful of the television shows, radio shows, and harsh or abrasive sounding commercials that come across the airwaves!”

Andréason asserts that dark energy can travel “via frequency and electrical current. If you ever want to [spiritually] test the energy in your home … turn off the power in your house for an hour and sit, and observe how you feel.”

Not a bad idea (and New Year’s resolution)!