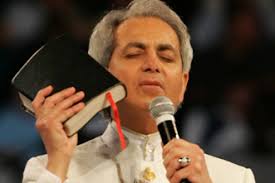 Did he really say it?

It has to do with the famous prosperity minister and healer, Benny Hinn, God bless him. Hundreds of thousands have gone to see this Israeli who was born in Jaffa of Palestinian, Greek, and Armenian heritage and became pentecostal as a teenager in Toronto after his family moved there. Many claim to have been miraculously healed of severe ailments through his touch and prayer.

Though he is notorious for his wealth (according to his nephew, a $9-million home), luxury cars, and extravagant traveling (again according to a nephew who worked with him, $25,000 a night for a massive suite at one of the world’s ritziest hotels (in Dubai), his ministry says it supports sixty mission organizations across the world and several orphanages, housing and feeding 45,000 daily.

Perhaps this is true. And if so, it is good. He may well have elements of ministry: an anointing from God. The wind blows where it may, Scripture says (John 3:8, even in odd places).

Others — including major networks investigating him — have asserted that at least on occasion, stories about his healings and other miracles have been fabricated, that his appearances are strictly orchestrated, that those who are severely ill and don’t receive a healing are kept from the camera’s view.  (This fellow spent all of his own money investigating Hinn.)

One can go back and forth with charges and denials and alleged scandals. We’re not interested in denouncing or proclaiming him. Is there a problem with mega-preachers? There is a problem with mega-preachers. Some have spent up to $25 million on personal jets (used strictly for evangelism, they insist) and live in $10-million home (Joel Osteen’s has three elevators and ten-car garage). We’ll let God judge all that. We are interested — and concerned — that anyone out there preaching to football stadium crowds would place a curse — an actual, televised curse — on his critics. This, unfortunately, happened with Hinn.

“I place a curs-s-s-s-e on every man and every woman that would stretch his hand against this anointing,” Hinn, the frequent target of national criticism, once intoned, hovering on the “s” with a hiss. “I curse that man who dares to speak a word against this ministry,”  he said, publicly vowing that their children and grandchildren might also endure the curse. 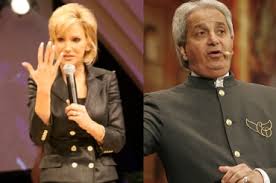 Extraordinary this is — a Christian cursing fellow Christians, over himself and again we ask God’s blessing on Hinn and all who utter or even think such words — for it’s what the Bible instructs us to do (Luke 6:28): bless those who curse you. Is it not a time of curses? Curses have also been placed on President Donald Trump by groups of witches. Meanwhile, another prosperity minister, Paula White, has all but cursed opponents of Trump. A time of curses indeed. Is it also not a curse when a person says “d–n you” or “go to h-ll.” They are not idle words. We also curse when we slander, gossip, criticize, and especially when we are envious or jealous.

When there is something intractable in your life, or when there are too many unfortunate events, ask the Lord to break any curses that may be operating at whatever level. And make sure you never curse at any level. It always boomerangs.

In the name of the Lord Jesus Christ, strengthened by the intercession of the Blessed Virgin Mary, Mother of God, of Blessed Michael the Archangel, of the Blessed Apostles Peter and Paul, and all the Saints, and powerful in the holy authority of His Precious and Wondrous Name, I ask, O Lord God, that you break and dissolve any and all curses, hexes, spells, seals, satanic vows and pacts, spiritual bondings and soul ties with satanic forces, evil wishes, evil desires, hereditary seals, snares, traps, lies, obstacles, deceptions, diversions, spiritual influences, and every dysfunction and disease from any source whatsoever, that have been placed upon me.

Father in Heaven, please rebuke these evil spirits and their effects and cast them away from me so that I may continue to do Your Will and fulfill the mission you have for me to Your Greater Glory.

Our Father…
Hail Mary…
Glory Be…

O My Sweet Jesus, forgive us our sins and save us from the fires of Hell. Lead all souls to Heaven, and help especially those who are most in need of Thy Mercy.

Holy Michael the Archangel, defend us in battle. Be our protection against the wickedness and snares of the devil. May God rebuke him, we humbly pray; and do thou, O prince of the heavenly hosts, by the power of God, thrust into hell Satan and all the other evil spirits who prowl through the world seeking the ruin of souls.