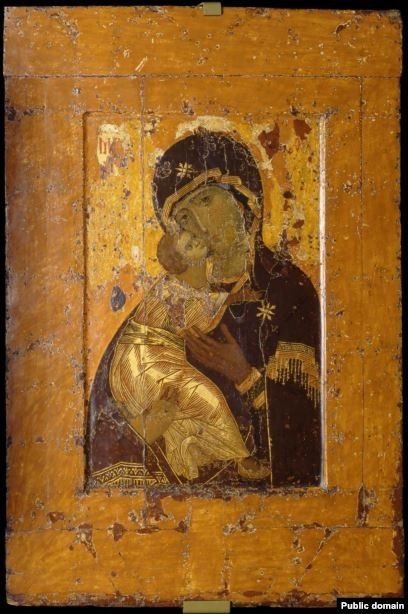 The new and splendid book of both photography and text, The World of Marian Apparitions, has a little chapter on the image (we’ve all seen it) called the “icon of the Madonna of Kiev” (as the city until recently was spelled).

“Its beauty,” points out the book, “is often compared to the Mona Lisa. The viewer’s attention is drawn to the Madonna’s gentle face, her head nuzzling the Christ Child’s.”

Indeed, many nations have nicknamed it “Our Lady of Tenderness” — and who can deny that aspect?

It became the template for Eastern Marian images — though never quite equaled.

It was created, we are informed, by a Byzantine monk for Prince Mstislav of Kiev and arrived in the Ukraine nearly nine hundred years ago! — in 1134.

It was taken from Kiev a couple decades later during an attack by Prince Andrey Bogolyubsky [right] — yes, a Russian. In 1395, it was transferred to Moscow, and later kept in the secular Tretyakov Gallery.

Saint John of Damascus taught that the icon “is not only the image itself but the presence of the portrayed saint,” notes the book (a great read and also worthy of any coffee table).

When apparitions occurred, back in Ukraine, at a small church in Hrushiv, in 1987, some said it was Mary portrayed as in the image of Kiev that they spotted in a supernatural luminosity that encompassed the church for at least three weeks.

Thousands — even atheist police — saw Our Lady, as if coming to announce the fall of Communism, and resurrection of Catholicism in Ukraine. Now that same country faces a new onslaught and a challenge even to its existence.

[resources: The World of Marian Apparitions]

[see also: The Virgin of Vladimir]