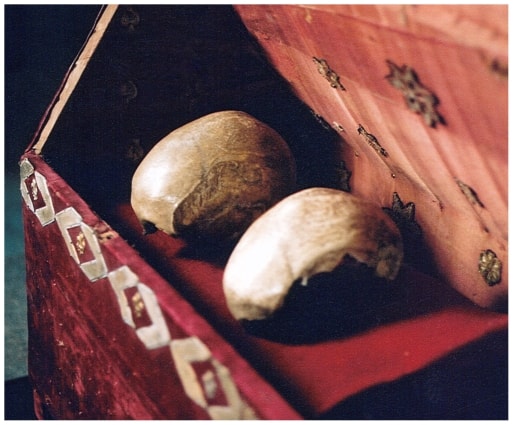 Back in 2018 the international press reported that the putative skull of Saint Bridget (Birgitta) of Sweden that has been kept in a shrine in Vadstena Abbey may not be authentic. A new study conducted at Uppsala University revealed that two skulls there, believed to be from Saint Bridget and her daughter Catherine (Katarina), were not from maternally related individuals. Furthermore, dating showed that the skulls were not from the time period when Bridget and Catherine lived.

Whose skulls are they, then? Were the actual skulls stolen?

We’ll let the archeologists and geneticists haggle over that. What we’re interested in is the fact that St. Bridget was a great prophet as well as a great saint. The news about her reminded us of her many prophecies, some of which — if valid — may be relevant to our own time. We have to emphasize that while she was canonized and her visions received Church approval, authorities have said that such meant her messages didn’t contain anything contrary to the faith and was not an actual validation of her predictions.

The daughter of a Swedish governor, St. Bridget was seven when she had a vision in which she was crowned by the Blessed Mother. The visions would continue her whole life, highlighted by reputed appearances of Jesus. “Bridget’s father consecrated all Fridays to special acts of penance, and from her childhood St. Bridget loved to meditate upon the Passion of Christ,” notes a website. “In obedience to her father, at the age of 13 she married Ulfo, Prince of Nericia in Sweden, by whom she had eight children, the last of whom, Catherine, is now honored among the Saints. Later the  couple  made a pilgrimage to Compostela in Galicia. On their return to Sweden, Ulfo, was stricken with an attack of illness, but recovered sufficiently to finish the journey. Shortly afterwards, however, he died (1344) in the Cistercian monastery of Alvastra in East Gothland. After his death St. Bridget  founded a new religious congregation, the Brigittines, or Order of St. Savior.”

The saint lived during a period when the Church was in disarray and when the world was about to be hit by a great chastisement called the bubonic plague, all of which affected and troubled her greatly. We know from Butler’s Lives of the Saints that a number of her prophecies — often focusing on current affairs — materialized. She prophesied that the Pope Urban V and Emperor Charles IV would meet amicably in Rome  — which indeed happened in 1368 — and later forewarned the Pope that he was approaching death (which occurred four months hence). 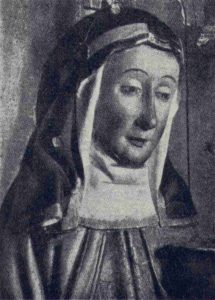 Bridget claimed she had a vision in which Jesus explained that world history had three parts: the period between Adam until Christ’s Incarnation; the roughly thousand years after His Coming; and a third period that would precede the Last Judgment (a time when iniquity would abound and impiety would grow to a tremendous degree, even greater than what was seen during the chastisement of the Middle Ages).

We have been searching to see if there is any truth to some more dramatic prophecies attributed to her. According to one account, St. Bridget prophesied that “when the Feast of St. Mark shall fall on Easter, the Feast of St. Anthony on Pentecost, and that of St. John on Corpus Christi, the whole world shall cry, ‘Woe!’

“The time of Antichrist will be near when the measure of in justice will overflow and when wickedness has grown to immense proportions, when the Christians love heresies and the unjust trample underfoot the servants of God.

“The time of this Antichrist, well-known to me, will come when iniquity and impiety shall above measure abound, when injustice shall have filled the measure to overflowing, and wickedness shall have grown to immeasurable proportions…. He will reign during three years, and shall have dominion over the whole earth…. “

Alleged Prophecy Of St. Bridget: Does It  Indicate Year Of Apocalyptic Events?

We noted quite some interest stirred by an article (above) we ran on the alleged prophecies of St. Bridget of Sweden. According to one account, this saint prophesied that “when the Feast of St. Mark shall fall on Easter, the Feast of St. Anthony on Pentecost, and that of St. John on Corpus Christi, the whole world shall cry, ‘Woe!'” — going on to describe the time when apocalyptic events would begin.

We don’t know what to think of this prophecy, and as we stated, we can’t even confirm that it’s from St. Bridget. It is interesting that some cite the date of June 24 (which is also the date of the first apparition in Medjugorje) and the year 2038. Our book, The Final Hour speculates that the secrets of Medjugorje will unfold by 2040 (with events also occurring before then, of course, as a graduation of events intensifies).

But back to St. Bridget: what to think of it? We heard from some readers:

Says Dibby Green of Santa Barbara, California: “I had to see how complicated it was to have Feast of St. Mark fall on Easter, Feast of St. Anthony (of Padua) fall on Pentecost, and Feast of St. John (birth of John the Baptist) fall on Corpus Christi.

Added a correspondent named Doris Ballard: “First off, before 1970, Corpus Christi was celebrated on the Thursday after Trinity Sunday. St. Mark’s Feast is on April 25

[resources: Michael Brown retreat, Chicago, and Where the Cross Stands]