There are a number of interesting elements in the pronouncement Thursday by Bishop Kevin C. Rhoades and five other bishops that while private devotion to what has been called “Our Lady of America” (alleged apparitions to a nun named Sister Mary Neuzil of Ohio) will be allowed, public devotions will not. And while there was no questioning the integrity of Sister Neuzil, he said, the apparitions have not been shown to be “supernatural.”

The statement from the bishops should be taken seriously and obeyed by all faithful Catholics.

Are the prayers from the devotion allowed? Yes. Can messages be studied privately? Yes.

But there can be no public displays, celebrations, or “cult.” “While private devotion inspired by reports of the apparitions could continue without harm to the faith, Bishop Rhoades said, it would not be appropriate for any sort of public devotion,” reported Catholic News Service, the American bishops’ official news site.

This should be adhered to.

While the current prelates in places where Sister Neuzil had some sort of involvement — the Cincinnati area, Toledo, Phoenix, Detroit, and Lafayette, Indiana — signed the letter about the apparitions, Sister Neuzil had previously garnered the strong support of Paul F. Leibold, archbishop of Cincinnati at the time of her alleged revelations (Archbishop Leibold went so far as to have a plaque of Our Lady of America hung in his residence and was inquiring about striking a medal), and more recently Cardinal Raymond L. Burke, formerly of St. Louis and later at the Vatican (see his letter to the United States Conference of Catholic Bishops below). Just weeks ago another bishop posed for a photograph with a statue of Our Lady of America, a statue that years ago was displayed at the cathedral in St. Louis. But the group of bishops said Archbishop Leibold, while attesting to the nun’s holiness, and issuing her messages an imprimatur, never promoted a public devotion to the apparitions. On May 31, 2006, a statue of Our Lady of America was enthroned at the Shrine of the Most Blessed Sacrament and Our Lady of the Angels Monastery in Hanceville, Alabama, by the Franciscan Friars of the Immaculate. On November 13th, Catholics rallied again to pray the Rosary with an image of Our Lady of America, outside the conference center for the ongoing 2019 conference in Baltimore of the United States Conference of Catholic Bishops. Participants were joined by Bishop Joseph E. Strickland of Tyler, Texas. Bishop Robert McManus of Worcester, Massachusetts, reportedly blessed the statue and asked to keep it for visits among the churches of his diocese, and also in 40 Days for Life and other pro-life events. 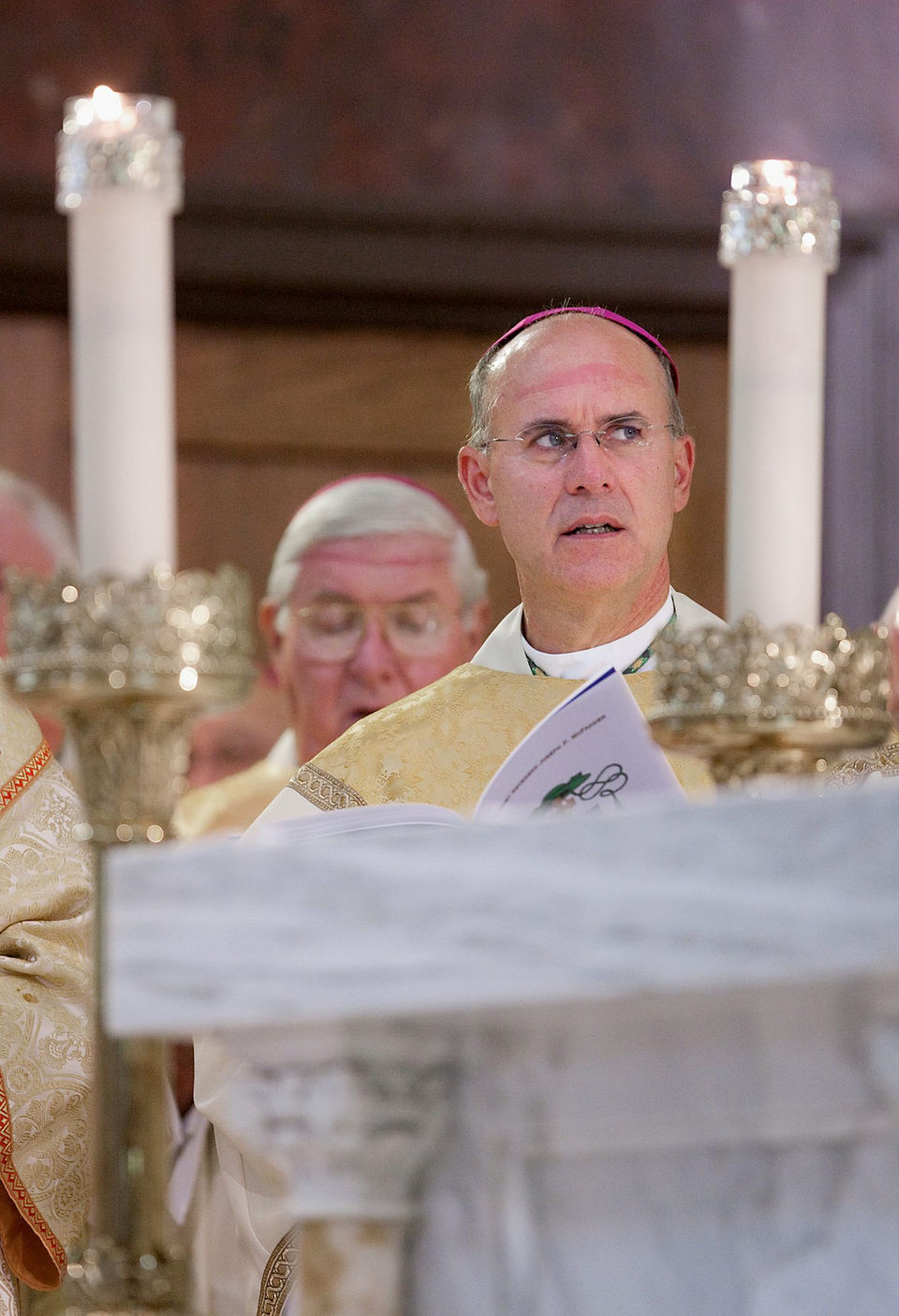 The apparitions had warned of coming disasters in the U.S. if it — and the Church — did not maintain purity. Both the nation and the Church currently find themselves in crisis. (The apparitions supposedly had warned of a “hitherto unknown” catastrophe.) There were strong warnings to priests about their morality, messages that rose to the fore during the incredible clergy-abuse cases that still haunt discasteries. The announcement came during May, the month of Mary, and cited an “error” in messages that elevated the role of Saint Joseph, who has been the subject in recent months of greatly renewed devotion. Ironically, Bishop Rhoades himself was entangled in the crisis when he was accused — then later cleared — of “misconduct” with a young male.

Regarding the experiences of Sister Neuzil, the bishops said their study concluded they should be described as “subjective inner religious experiences rather than objective external visions and revelations.” “I must come to the conclusion that the visions and revelations themselves cannot be said to be of supernatural origin in the sense of objective occurrences,” Rhoades said in a final document known as a singular decree, adding that he “cannot approve or support public devotion or cult.” While saying such experiences were “authentically graced moments,” the document added that her “own imagination and intellect were constitutively engaged,” as opposed to “objective visions and revelations of the type seen at Guadalupe, Fatima, and Lourdes.”

The bishops’ statement was based on a study by a commission. It is not a “condemnation” (as has been proclaimed at other U.S. sites such as Bayside in Queen, New York, and Necedah, Wisconsin) but a declaration of “constat de non supernaturalitate.”

To the Bishops of the United States Conference of Catholic Bishops:

Having reviewed the correspondence between Sister Mary Ephrem and her spiritual director of many years, Monsignor Paul F. Leibold, Vicar General of the Archdiocese of Cincinnati, who later became the Bishop of Evansville and, then, Archbishop of Cincinnati, it is clear that the devotion, as proposed by Sister Mary Ephrem, received his approbation. In addition to the correspondence by which Monsignor Leibold declared the approval of the devotion, he also carried out the first of Our Lady of America’s requests, made through Sister Mary Ephrem, namely, he had a medal struck with the image of Our Lady of America on one side and the coat of arms of the Christian family on the other.

The coat of arms symbolically represents the substance of the private revelation received by Sister Mary Ephrem, namely, the Indwelling of the Holy Trinity in the Christian home, which is the source of life and unity in the family. The coat of arms points to the purity and selflessness of love in the family, because of the Indwelling of the Holy Trinity, the model of which is the Mother of God, under her title of the Immaculate Conception, patroness of our nation. In a particular way, Our Lady of America expressed her desire that the United States of America, through her intercession, be devoted to the purity of love. She identified herself to Sister Mary Ephrem as “Our Lady of America, The Immaculate Virgin.” In the consecration of our nation to our Blessed Mother, made in 1959 at the National Shrine and renewed, in our name, by Bishop David Ricken on November 11, 2006, the Saturday before the November meeting of our Conference of Bishops, our Blessed Mother is addressed as “Immaculate Virgin.”

The contents of the private revelation received by Sister Mary Ephrem were published in a booklet, first in 1960, and, again, in 1971. Both of these editions were published with the Imprimatur of Archbishop Leibold. A final edition, with some new contents, was published in 1989. The new contents were added at the direction of Father Edmund Morman, S.V.D., the last chaplain of Our Lady of the Nativity Convent at New Riegel. Father Morman was sadly killed in an automobile accident on February 17, 1986.

As Archbishop of Cincinnati, Archbishop Leibold commissioned a wooden plaque with the image of Our Lady of America, which he gave to the cloister at New Riegel, at which it was displayed for many years in a public area. He had the wooden plaque created for the specific purpose of its use in processions at the New Riegel convent.

Archbishop Leibold also authorized the Weberding Woodcarving Shop at Batesville, Indiana, to carve a statue of Our Lady of America. The statue was carved for Our Lady of the Nativity Convent at New Riegel, Ohio, at which public devotions to Our Lady of America were regularly celebrated.

The prayer attached to the devotion also received the imprimatur of the then Monsignor Leibold, Vicar General of the Archdiocese of Cincinnati. Archbishop Leibold was Sister Mary Ephrem’s spiritual director from the time that he was Vicar General of the Archdiocese of Cincinnati until he died in 1972. Archbishop Leibold was always clear that the approved devotion had its origin in private revelation received by Sister Mary Ephrem over many years.

What can be concluded canonically is that the devotion was both approved by Archbishop Leibold and, what is more, was actively promoted by him. In addition, over the years, other Bishops have approved the devotion and have participated in public devotion to the Mother of God, under the title of Our Lady of America.

Although the devotion to Our Lady of America has remained constant over the years, in recent years the devotion has spread very much and has been embraced by many with special fervor. Seemingly, as has been suggested by Father Peter Damian Mary Fehlner, F.I., in his homily of August 5, 2006, at the Shrine of the Most Blessed Sacrament in Hanceville, the moral crisis of our time, which demands a new teaching and living of the virtue of purity, has found an especially fitting response of loving care from the Mother of God in her message to Sister Mary Ephrem.

Some have raised with me the canonical question regarding the status of Our Lady of the Nativity Convent in Seneca County, Ohio, which has been the residence of any remaining member of the suppressed contemplative branch of the Congregation of Sisters of the Most Precious Blood of Jesus. In response, I observe that the canonical question has no bearing on the devotion or its approbation.

I hope that the above may be of some help to you in responding to questions regarding the devotion to Our Lady of America.

May the Immaculate Virgin intercede for the intentions of our dioceses and our nation. With fraternal gratitude and esteem, I remain

Yours devotedly in Christ,
(Most Rev.) Raymond L. Burke Archbishop of Saint Louis]