From Forums of the Virgin Mary [for discernment only]: 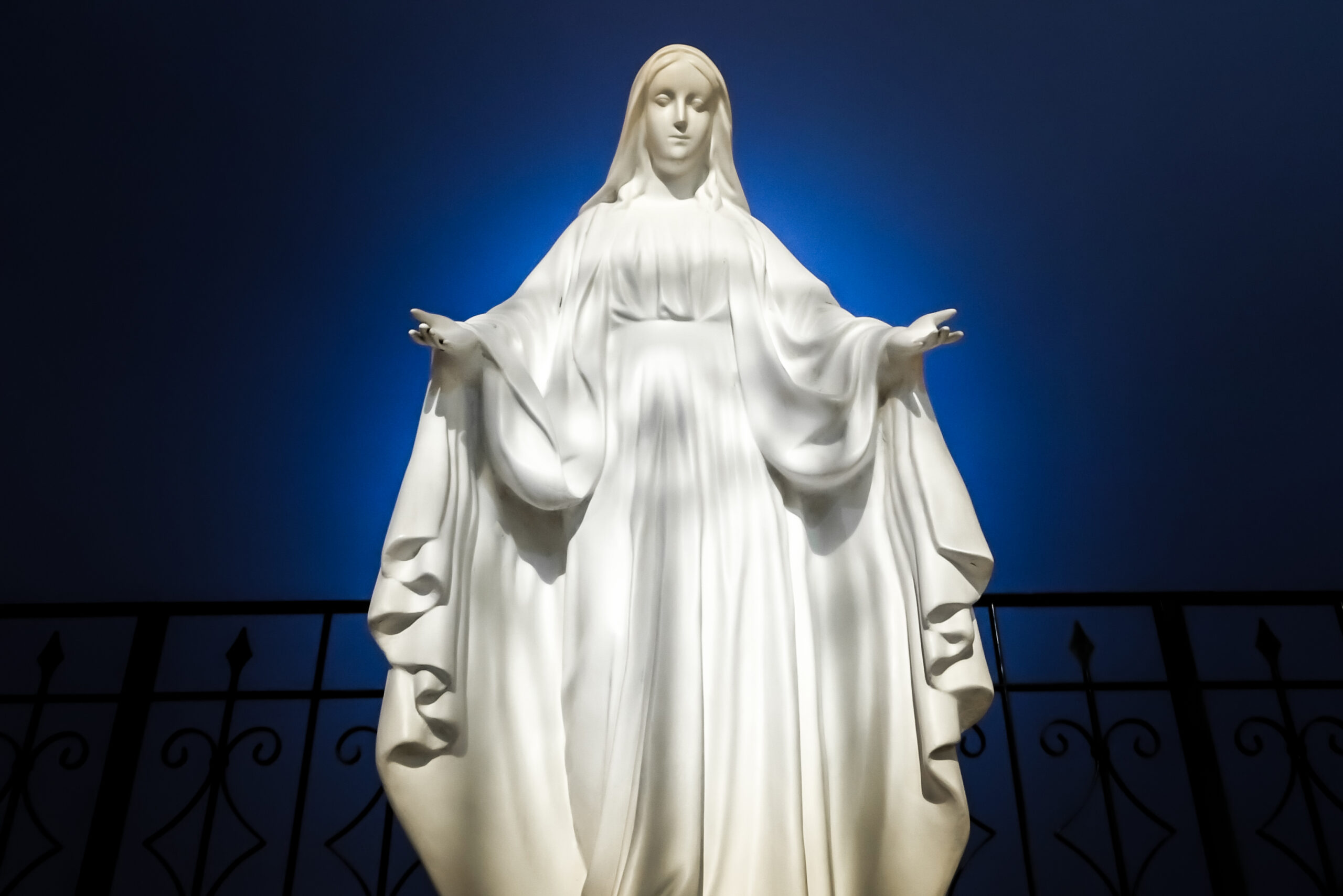 Our Lady of Grace is in the approval process and her seer is in the beatification process.

In the 1930s there was an apparition that has entered the approval process with the bishop reportedly preparing to begin the process of beatification of one of the visionaries.

It is unknown outside of Brazil.

The visionaries spoke of tribulations that will come to Brazil, but two mysteries remain.

On the one hand, what those tribulations might be.

And on the other hand: whether these tribulations extend to the entire region.

Here we will talk about how this apparition was, what the prophecies of Our Lady were, and why it is possibly not a prophecy only for that country, considering that other apparitions to which it refers, Fatima and La Salette, which spoke for the whole world and not just for the country in which they happened.

It is located 212 kilometers from Recife, the capital of the State, in the north of Brazil.

The two girls went to collect castor beans while talking about the danger of highwaymen.

And looking towards the mountain, they were surprised to see, at the top, the image of a woman with a child in her arms, making signs with her hand.

ishop of Pesqueira, Monsignor José Luiz Ferreira Salles, took the first step in recognizing the apparitions of Our Lady of Grace, in a pastoral letter

He pointed out that the messages of this apparition are in keeping with the truths of the Christian faith and that there are indications indeed of a supernatural visitation.

And he also announced that the diocese requested the beginning of the beatification process of one of the visionaries, María da Luz, who would later take the name of a religious, Sister Adelia.

Let’s see what happened in these apparitions.

On the day of the first appearance, María da Luz told her father Arthur, who immediately wanted to accompany the girls to the place; it was close to noon.

The presence was still there and the father told them to ask what the Virgin wanted.

“My daughters, dire times are coming for Brazil! Tell all the people that three great punishments are coming, if they don’t do a lot of penance and prayer.”

The news spread throughout the region and many began to visit the place to pray, some out of curiosity; others asked for a visible sign of the apparitions.

The family faced the initial distrust of the town, the silence of ecclesiastical authorities, and the attempt of the governors to stop the devotion.

Even the police detained Arthur, put up armed surveillance in the region, and threatened pilgrims.

But they could not arrest the fervor that had been unleashed.

The bishop of the time had the girls analyzed by a doctor, who found them healthy, and appointed a priest to investigate the case. The priest would later say that when he went to the place and spoke with the girls, he did not believe them.

And he asked the apparition questions in German to make sure, while the girls received the answers in Portuguese and communicated them to the priest.

When asked what the punishments were, the apparitional woman did not reply but said she would tell later.

But she added that the events would not be so soon.

And she repeated that they could be avoided with penance and prayer.

And that the devotions the seers should practice were to the Heart of Jesus and to her Immaculate Heart. She asked them to preach these devotions.

On one occasion, she presented herself with bloody hands and said that blood will flood Brazil.

That communism will penetrate, although not to the interior of the country.

That the priests and bishops will suffer and that it will be almost like in Spain, referring to the civil war [and horrible persecution] that took place between 1936 and 1939.

She also said the [alleged] apparition was a repeat of La Salette’s.

At the apparition on August 10, Our Lady gave the sign they were requesting, causing water to flow from a cavity in a rock in front of the apparition site and leaving the imprint of her foot.

And she said that it was water to cure diseases, but that only those who have faith could approach it.

Our Lady asked that a wall or a fence be erected, because only contrite and pious souls could approach to make prayers and penances.

But the police came, broke down the fence, and immediately the water dried up.

The priest had the fence rebuilt, and soon after the water gushed out again.

But after eight days the police returned, destroyed the fence and, as before, the water disappeared.

Then the priest asked who notified the police and Our Lady said that it was another priest and when they asked the apparition the name, the girls communicated it to the priest who requested it!

We do not want to dwell on more details and miracles, but go to the central point, which is to identify the three punishments or tribulations that Brazil will suffer; whether any of them have already happened or not; and again, if the message was only for Brazil.

Let’s see what we have then in the central message of the apparition.

Point 1, the Virgin said, three punishments are going to come to Brazil, not now (that is, not around 1936), but later.

So we are facing an alleged prophecy for the future.

The question may remain as to how much later, but if we allow ourselves to be carried away by the generality of heavenly prophecies, later in heavenly times means a considerably long time, not a few years.

Point 2, she said communism will take Brazil, but not the interior; it will cause bishops and priests to suffer; it will involve bloodshed; and it will be almost as it happened in the Spanish civil war, where we remember that around six thousand priests, religious, and nuns were executed.

In this we can detect the first punishment that Our Lady speaks of.

The message is like that of Fàtima in 1917, when Our Lady came down to alert us to the spread of the errors of Russian communism.

And in this case, of Our Lady of Grace, the question remains whether the regime of Joao Gulart in 1964, that of Lula Da Silva in the first decade of 2000, and the founding of the Forum of São Paulo in 1990, are the communist attacks mentioned or it will be something to come.

But since there were no bloody events minimally comparable to those of the Spanish civil war, it is reasonable to assume that these three things are minor skirmishes.

On the other hand, what is said for Brazil is also valid for the entire region, due to the spread of communism in the continent, especially through the Forum of São Paulo.

Point 3, she said this supposed apparition is the continuation of the apparitions of La Salette in France, in 1846.

The most important message of La Salette is the apostasy and the moral degradation of the Church, so here we could have the second of the punishments of which she speaks.

The Catholic Church in Brazil has lost faithful in a dizzying way, especially to Pentecostals.

And the same has happened in the region, although not as much as in Brazil.

And at the same time, the Brazilian clergy are very influenced by Liberation Theology, a kind of free translation from Marxism to Catholicism, and by modernism.

Here we can identify apostasy as a second punishment, which is also valid for the entire region, according to what we see in various countries.

Point 4, a source of healing water appeared that the Virgin said was to be successfully used only by people of faith. Here we can identify the third punishment in fact: if there is no conversion, there will be illness when faith disappears.

As the abandonment of the faith grows, the grace that Our Lady left will be effective in fewer people.

The outpouring of grace applies to the entire region and the apostasy as well.

And point 5, Our Lady said that to avoid these punishments one must do penance and pray the rosary, and practice devotions to the Sacred Heart of Jesus and the Immaculate Heart of Mary.

This is the solution the apparition gives us.

Because now the global message is clear, the tribulations that will come are going to bring the loss of faith.

Heaven brings us graces, that is why this apparition bears the name Our Lady of Graces, not by chance, but we have to be in grace to be able to seize the graces that she brings.

Well, so far what we wanted to tell about an apparition that is in the process of being approved and one of its seers being beatified, and how her message could not be considered only for Brazil but for the entire region…