Today’s Mass reading (Daniel Chapter 3): “For we are reduced, O Lord, beyond any other nation, brought low everywhere in the world this day because of our sins.”

The Blessed Mother — as manifested in a Black Madonna — was behind the great deliverance of untold thousands from ravaging epidemics in Rome and elsewhere (as we have pointed out before), and those deliverances led, among other things, to what is arguably the most famous of her apparitions.

This is not to compare what is occurring in the world with past plagues: The coronavirus would have to mutate into something more severe to compare.

But let us continue to look at what has occurred.

We’ll take it quickly from the top:

This goes back deep ago: 1,500 years. Rome had invited it — its downfall. She had laid out a red carpet. Through idolatry her citizens had invoked demons for centuries, and now here were barbarians from the north — from those regions that would form the rootstock of Russia and Germany. Warrior types. It was the end of the Classical Period and beginning of the Dark Ages. The city was sacked not only by the Goths but also a yet more barbarous horde known as Hunnica or “Huns” — an Asian tribe identified curiously with Scythian werewolves. They were accused of drinking blood, cannibalizing the young, and destroying so many towns no one could number the dead or the pillaged churches.

They were said to come with flames and again the smell of sulfur, attacking with deafening howls, presaged, when they  attacked Constantinople, by a great quake. Before them the earth trembled.

Even as such vicious attacks continued,  plague returned at regular intervals and when it struck Italy between 588 and 591, it even claimed the life of Pope Pelagius II. Rampant fever and swellings called “buboes” (thus the term bubonic) only added to the woe, as did a flooding of the Tiber. The scourges caused the new Pope, Gregory, one day to be known as “the Great,” to wonder if mankind was approaching the Final Judgment.

As Listverse informs us: “Both the Justinian Plague and the Black Death were caused by the same microbe, Yersinia pestis. Although the strains of each plague differed, both had deadly consequences. The Black Death, which happened between 1347 and 1351, killed 50 to 200 million Europeans. The earlier Justinian Plague killed up to 100 million people across Europe, Asia, Arabia, and North Africa in 50 years.

“Although roughly 800 years apart, both plagues are known to have been spread by rodents and their fleas, which transferred the deadly bacteria to humans. Strains of the original microbes are still carried by rodents today.”

In a letter to King Ethelbert of Kent, as we mentioned yesterday, Pope Gregory speculated that “the unending kingdom of the saints is approaching” and predicted there would be many “unusual” signs, including “climatic changes, terrors from heaven, unseasonable tempests, wars, famines, pestilences, and earthquakes,” if not just then, soon in subsequent years.

“Everywhere death, everywhere mourning, everywhere desolation!” wrote this Pontiff, also known as Gregory the Dialoguist for his many writings (including on mysticism and near-death experiences).

“Cities are destroyed, armed camps overturned, districts emptied of peoples, the earth reduced to solitude. Not a native remains in the countryside, nor scarcely an inhabitant in the cities; nevertheless, these small remains of humankind are still being slaughtered daily and without cease. The scourges of Heavenly justice have no end because even in their midst there is no correction of the faults of our actions.”

Although no one can be certain of dates so far back, some record January 590 as the month Pope Gregory led a three-day procession through the streets of Rome in a desperate bid to call down intervention. This too we have discussed. 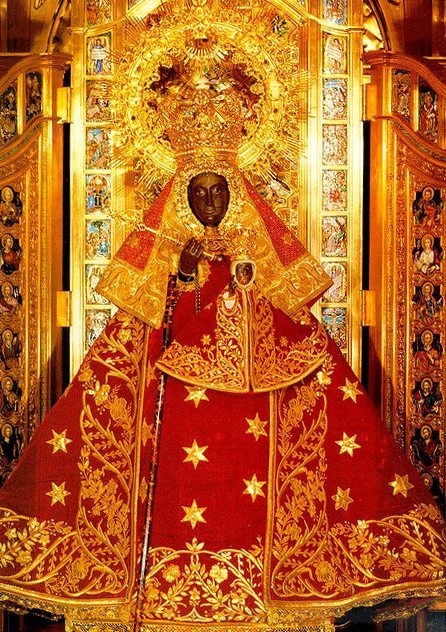 The processionists carried that statue made, it was said, by the apostle Luke and kept at Mary Major Basilica — where Pope Francis currently seeks aid before trips abroad, and which Mary had once designated as the spot for a church in a dream to another Pontiff. The statue was fashioned in unstained wood and showed Mary with the Christ Child. It was believed to have special power as a palladium (relic against evil) — a belief the Holy Father obviously shared and carried with solemnity past the flooded homes, the shops and consular offices closed because of the plague, past the old pagan strongholds and the destructions caused by barbarians, past the baths of the Emperor Diocletian, so infamous for his persecution of Christians, past people falling and dying, exorcising a city where Christians had been killed for refusing to eat meat which had been offered to a goat’s head, the time-honored symbol of Satan, and now suffered disease. “Lord have mercy!” shouted the processionists.

That’s when it had happened: As the procession crossed an old stone-arched bridge over the Tiber and arrived at the mouth of Via Conciliazone near St. Peter’s, the devout caught glimpse, they insisted, of a manifestation above an old rotund funerary: the incredible sight of an angel identified as Michael putting away his sword and marking the end of God’s justice, just as many centuries later the third secret of Fatima would include the image of an angel with a flaming torch, ready to touch the earth with it but the flames drowned out with a light coming from the Virgin.

It was an apparition atop what is today called Castel Sant’Angelo, and almost immediately the sickness, the series of centuries-long punishments, ended.

Such was not superstition. When northern Spain encountered similar oppression, in this case by invading Muslims, Pope Gregory gave the miraculous statue to the bishop of Seville, who became Saint Leander.

It was credited with turning back Islam but buried during subsequent Muslim takeovers.

Centuries later, to get to the heart of this little historical excursion, in the hilly terrain southwest of Madrid, a humble cowherd — so often is it a shepherd! — was searching for a lost cow. His name was Gil Cordero (of Cáceres) and the year was 1326. Thirsty and fatigued and heading toward the sound of a stream (he’d been searching for three days), Cordero spotted the missing animal laying on a mound of stones, motionless. Figuring the animal to be dead, the cowherd pulled out a knife and prepared to take the animal’s hide, which he could then sell. As was customary, in these parts, where Christianity was unabashed, he made the initial incision in the form of a Cross on the cow’s breast.

Suddenly, the animal moved — not just flinched, not just budged, but sprang up on its hooves, restored to life. The “dead” cow was standing!

At the same moment, Gil spotted something or someone coming from the woods — a woman, but no normal woman. That was immediately obvious . There were no normal women out this way, in the lonely, untrammeled wilderness. It was a female “of marvelous beauty,” say historical accounts (at the Marian Library in Dayton, Ohio) and she said, “Have no fear, for I am the Mother of God, by whom the human race achieved redemption. Go to your home and tell the clergy and other people to come to this place and dig here, where they will find a statue.” She also asked for a chapel to be built there.

Although Cordero was initially mocked, officials knew that many relics had been buried during the horrible Muslim invasions and led the entire village — knights, noblemen, and priests, as well as average folks — to the spot Cordero indicated, pushing aside stones and boulders and digging into the earth until it collapsed into a small cave.

Inside was just what the apparition promised: a statue (along with an ancient bell). As a document buried with it explained, it was the image of Mary that Pope Gregory the Great had paraded a thousand years before in Rome.

The unstained, oriental wood seemed in perfect condition despite six centuries in the earth — coming out of seclusion at a time when the last Muslim holdouts were being expelled. (Such had been the Muslim or “Moor” dominance that to the west, in Portugal, a hamlet had been named after one of Mohammed’s daughters, whose name had been Fatima.)

Here we get to the most amazing part of it. For the area where Cordero and fellow villagers found the statue was known as “Hidden Channel,” after a waterway that apparently narrows and was obscured by woods. It may have been the water Gil had heard, for all we know, in 1326.

What we know for sure is that in the local dialect, “Hidden Channel” was translated as “Guadalupe.”

That was two full centuries before the far more famous Guadalupe appearances in Mexico.

Incredibly, the site of this apparition became a major pilgrim spot and — more incredibly, more providentially yet — replicas of the statue, the palladium used by Pope Gregory, spread far and wide.

One of the pilgrims known to have frequented the shrine and carry a replica of the statue was a Spanish explorer (Italian in birth) named Cristóbo Colón, or Christopher Columbus. The replica went with him on his voyages to the new world.

Here we come to America.

It was at the monastery housing this effigy, in Extremadura, by Guadalupe River, that the Spanish monarchs, Isabella and Ferdinand, in fact had signed documents authorizing that first voyage of Columbus.

“Isabella had prayed at the foot of the Black Madonna for guidance on whether to finance Columbus’s journey,” notes an historical account. “Columbus went to the monastery to pray for a safe voyage. When he returned to Spain, he traveled to the monastery to thank the Virgin for her help and protection.”

This gets us into the nitty-gritty of it and also takes us to what is not recorded in history textbooks.

For Christopher Columbus was not only a devout Catholic, but — like other explorers who would follow in his wake — a missionary.

He considered the evangelization of the New World his primary goal. Mary’s face adorned the ships of explorers across the Atlantic.

In fact, Columbus, we came to learn, was a third-order Franciscan who when possible attended daily Mass, including a liturgy as well as Confession before setting out on his dangerous, remarkable, history-making exploration. He even thought of entering the seminary.

So does America have a connection, from its very European establishment, to plague.

So too does it have a connection with the Blessed Mother.

Unless it comes back to her, what awaits it is what was witnessed in Rome in those days of the great Pope named Gregory.