Interesting it was, last week, when the Bulletin of Atomic Scientists moved their “doomsday clock” (gauging the risk of humans destroying the planet) up thirty seconds to two-and-a-half minutes till midnight, the closest since 1953, when the first hydrogen bomb was tested (and closer than the three minutes during the height of Cold War tensions). Compare that to the seventeen minutes until midnight in 1991, after the collapse of Communism (“midnight” meaning, of course, some sort of an apocalypse). It is certainly not a time of ataraxia.

While, to many, it seems like “happy days are here again” (as they are, for us pro-lifers, when it comes to matters such as upcoming Supreme Court picks and protection of Christian rights), it turns out that many of the wealthiest in America are investing in “apocalypse insurance”: storing supplies, building bunkers, buying firearms, and investing in gold coins in anticipation of societal chaos, whether from economic disintegration, war, or societal turmoil (including rebellion against the wealthy, as the disparity between rich and everyone else continues to skyrocket).

A “Russian revolution” in America? Or something that changes the way we all live? Could it be true that America’s richest are donning tin-foil caps?

The “prestigious” New Yorker Magazine had a recent cover, below, on this trend among the rich, as have other mainstream media.

We now present a smattering: 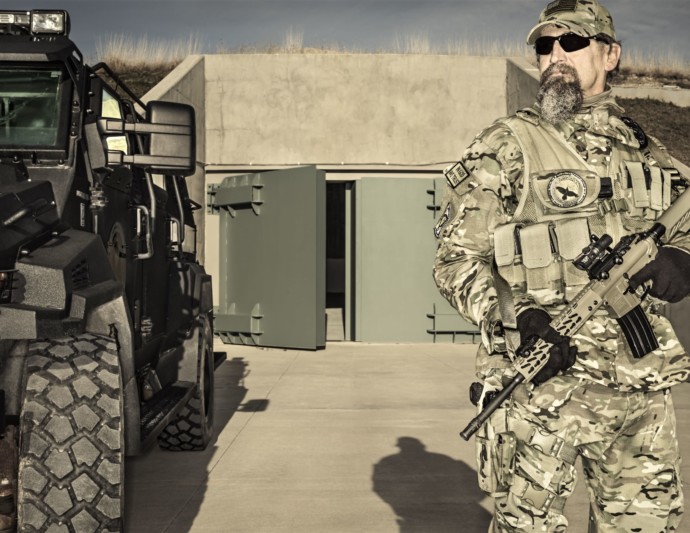 From The New Yorker:

Survivalism, the practice of preparing for a crackup of civilization, tends to evoke a certain picture: the woodsman in the tinfoil hat, the hysteric with the hoard of beans, the religious doomsayer. But in recent years survivalism has expanded to more affluent quarters, taking root in Silicon Valley and New York City, among technology executives, hedge-fund managers, and others in their economic cohort.

Last spring, as the Presidential campaign exposed increasingly toxic divisions in America, Antonio García Martínez, a forty-year-old former Facebook product manager living in San Francisco, bought five wooded acres on an island in the Pacific Northwest and brought in generators, solar panels, and thousands of rounds of ammunition. “When society loses a healthy founding myth, it descends into chaos,” he told me. The author of “Chaos Monkeys,” an acerbic Silicon Valley memoir, García Martínez wanted a refuge that would be far from cities but not entirely isolated. “All these dudes think that one guy alone could somehow withstand the roving mob,” he said. “No, you’re going to need to form a local militia. You just need so many things to actually ride out the apocalypse.” Once he started telling peers in the Bay Area about his “little island project,” they came “out of the woodwork” to describe their own preparations, he said. “I think people who are particularly attuned to the levers by which society actually works understand that we are skating on really thin cultural ice right now.” [Full story]

Peter Thiel is a billionaire, the biggest Donald J. Trump supporter in Trump-hating Silicon Valley and, above all, someone who prides himself on doing the opposite of what everyone else is doing.

So it makes perfect sense that right after President Trump proclaimed that “the bedrock of our politics will be a total allegiance to the United States of America,” Mr. Thiel was revealed to have become in 2011 a citizen of a small country on the other side of the world: New Zealand.

In these uncertain times, it may be smart to have a backup country. But the news that one of the richest citizens of New Zealand was a naturalized American who was born in Germany set off an immediate furor in the island nation, with questions being raised about whether being a billionaire gets you special treatment. [Full story]

Some upper-income Texans are headed down below, not Australia, but below the surface.

An investor group is planning for a doomsday scenario by building a $300 million luxury community replete with underground homes. There will also be air-lock blast doors designed for people worried about a dirty bomb or other disaster and off-grid energy and water production.

Residents will enjoy an equestrian center, 18-hole golf course, polo fields, zip lines and gun ranges. Retail shops, restaurants and a row of helipads are also in the works. For those looking to “get away,” they’ll also be able to enjoy three white sand beaches and a neighborhood spa.

“We’ve evolved it into long-term sustainability instead of a survival community,” Trident Lakes CEO Jim O’Connor told the Houston Chronicle, adding that the 400 planned condos will house about 1,600 people. “The concept is to build a community that will last two centuries or longer. That means we’re looking at designs that include earth structures that won’t be exposed to the elements.”

Chance the Rapper says he wants to move there and tech billionaire Peter Thiel has become a citizen. Wellington-based journalist Ben Collins asks whether New Zealand is becoming a “utopia” for Americans looking to leave.

Forget bunkers in the forest full of food tins and bottled water – it seems New Zealand, with a population of 4.4 million, has become the best option for a new breed of American survivalist.

When the New Zealand Herald revealed this week that Silicon Valley tech billionaire Peter Thiel had become a citizen and purchased a lake-front estate it perhaps shouldn’t have been a surprise. [Full story]

We have all of that — in just the past few days.