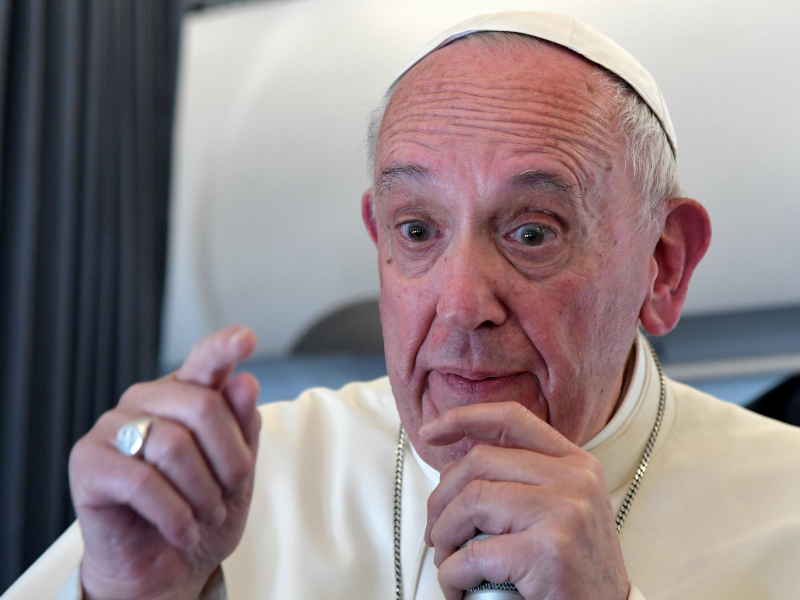 Question: In Fatima we have seen a great testimony of popular faith, the same one seen in Medjugorje. What do you think about the apparitions and the religious fervor they have aroused, since you decided to appoint a bishop delegate for the pastoral aspects?

All apparitions or alleged apparitions belong to the private sphere, they are not part of the ordinary public magisterium. For Medjugorje Benedict XVI instituted a commission presided over by Cardinal Ruini. I received the result, was composed of good theologians, bishops and cardinals. The commission’s relationship is very, very good. There were some doubts in the Congregation for the Doctrine of the Faith, and the dicastery considered it appropriate to send all the documentation, including opinions contrary to the Ruini relationship, to each of the members of the IV Fair (the monthly meeting of the Congregation). I received the notification on a Saturday, already late. I did not think it was right: it was like “auctioning off” the Ruini relationship, which is very well done. On Sunday morning, the Prefect of the Doctrine of the Faith received a letter in which I ask you to send to IV Fair those opinions against, to send them to me personally. These opinions were studied, all (underline: all). The relation Ruini affirms that it is necessary to distinguish the first apparitions, when the visionaries were small and says that it is necessary to continue investigating those. Regarding the presumed present appearances, the relationship presents its doubts. I personally am more evil, I prefer the Virgin Mother than the Virgin who becomes in charge of a telegraph office and sends a message every day. And these alleged appearances are not so valuable: I follow this as personal opinion. There are those who think that the Virgin says: “Come, on such a day, at such an hour, I am going to give a message to that seer.” Then, third point, is the spiritual and pastoral fact, the knot of the relationship: people who become, who find God, who changes their lives. And this not thanks to a magic wand. This fact can not be denied. Now, to see this, I appointed a good bishop (Monsignor Hoser, ndr.), who has experience to deal with the pastoral part. At the end something will be said.

Pope Francis: I’ll start with the first. I read in the papers that I peruse in the morning that there was this problem, but I still don’t know how the details are and because of this I can’t give an opinion. I know there is an issue and the investigations are moving ahead. I hope that they continue ahead and that the whole truth comes out. Medjugorje, all the apparitions, or the presumed apparitions, belong to the private sphere, they aren’t part of the public, ordinary magisterium of the Church. Medjugorje. Medjugorje. A commission was formed, headed by Cardinal Ruini. Benedict XVI made it. I, at the end of 2013 the beginning of 2014, I received the result from Cardinal Ruini. It was commission good theologians, bishops, cardinals, but good. Very good. And the commission. The Ruini report was very, very good. Then there were some doubts in the Congregation for the Doctrine of the Faith, and the Congregation judged it opportune to send each one of the members of this Feria quarta (Editor’s note: “Feria Quarta” is a once-a-month meeting in the Congregation for the Doctrine of the Faith during which current cases are examined) all the documentation, even those that seemed to be against the Ruini report. I received a notification – I remember it was a Saturday evening, late evening… and it didn’t seem right. It was like putting up for auction – excuse me the word – the Ruini report which was very well done. And Sunday morning the prefect received a letter from me that said that instead of sending them to the Feria Quarta, they they would send the opinions to me personally.

These opinions were studied and all of them underscore the density of the Ruini report. Principally, three things must be distinguished: the first apparitions, that they were kids. The report more or less says that it must continue being studied. The apparitions, the presumed current apparitions: the report has its doubts. I personally am more nasty, I prefer the Madonna as Mother, our Mother, and not a woman who’s the head of a telegraphic office, who everyday sends a message at such hour. This is not the Mother of Jesus. And these presumed apparitions don’t have a lot of value. This I say as a personal opinion. But, it’s clear. Who thinks that the Madonna says, ‘come tomorrow at this time, and at such time I will say a message to that seer?’ No. The two apparitions are distinguished. The third, the core of the Ruini report, the spiritual fact, the pastoral fact. People go there and convert. People who encounter God, change their lives…but this…there is no magic wand there. And this spiritual and pastoral fact can’t be ignored. Now, to see things with all this information, with the answers that the theologians sent me, this good, good bishop was appointed because he has experience, to see the pastoral part, how it’s going. And at the end he’ll say some words.