An interesting start to Holy Week, as we hear various unusual reports. 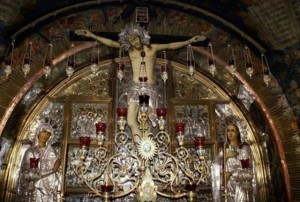 At the Church of the Holy Sepulcher — the holiest spot this time of year, and for that matter any time — Orthodox priests reportedly saw rays shining from the Holy Icon of Christ the Crucifix.  “When they went to examine the strange light they discovered the icon had its eyes open,” says a report. “Some of the priests posted the images on social media. Could this be a sign of the times or a miracle?”

A priest there tells us it was for just a few hours on one particular day, but apparently it occurred as recently as March 29 and by one report also in February. Are both eyes opened in the shot above? (Naturally, there is controversy over one priest there.) A U.S. pilgrim leader also reports that he saw it.

Meanwhile, elsewhere in the region — in Syria — we learn of a sacred community where legend has it the Virgin Mary stayed.
This is in the besieged province of Hama at a town called Mhardeh, according to Sputnik News, which was reporting on a number of Russian militia and their families there. The population, it seems, almost exclusively consists of Orthodox Christians, about 20,000 in all, though many fled with families during recent violence.

Will terrorists — who have their eyes on it — destroy this place?

Says Sputnik: “[A] small church is located near the city center. Its doors are hanging quite low on purpose so that everyone who wants to enter it has to bow in respect. Everything inside looks modest and there is almost no light, only burning candles under the images of the holy saints and in front of the altar. ‘Mhardeh is an extremely important city for Christians. In the church of the Blessed Virgin Mary, it is believed that Virgin Mary was here for some time in this room to the right of the altar,’ the guardian of the church told [our correspondent].”

According to the correspondent, inside a room at the altar where the Virgin Mary spent several days of her life, “one can feel shivers running down their spine.” As the newspaper adds: “Just about four kilometers from this historically sacred place there are terrorists who are ready to turn this place into a heap of stones as soon as they get a chance. But the residents of Mhardeh believe that the government forces will liberate the neighboring Halfaya and in the near future they will defeat terrorists in Idlib. However, to date, no one is in a hurry to bring their families back and everyone keeps their weapons close by.” Prayer urgency…

Isn’t it interesting that all this comes out as Holy Week is here and all eyes internationally are on Syria — and the U.S. strike after a horrendous government gas attack? (We say alleged, because, stranger yet, Catholic bishops in Syria believe an investigation should have been conducted before declaring it such and taking action).

But, then, times have always been strange.

Looking back at things related to the Crucifixion, we note a long-ago report in Harper’s Weekly (50-715) to the effect that in Patrick County, Virginia (where the Blue Ridge and Allegheny mountains conjoin), numerous tiny stone crosses were once found — as if from nowhere. From what I can determine, this was in the 1860s (again, conflict: Civil War-time).

They ranged in weight from a quarter of an ounce to a full ounce. It also made Scientific America (79-395), that some of them were no bigger than a pin.

Most were on Bull Mountain. Some were also found in two other states.

Some were Roman Crosses. The St. Andrew Cross. Some Maltese.

They were called “fairy crosses” by one cynical scribe of the arcane. We declare nescience.

Geologists said they were simply crystals.