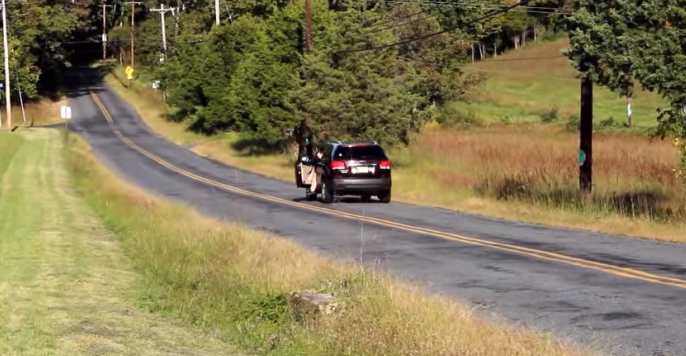 From an out-take of Lying Wonders, Strangest Things]:

When I lived in New York I drove one weekend night to a spot near Montclair, New Jersey, where there’s a highway exit that goes down a hill — and back up, if you let it.

That is, you pull over at the base (if there’s no one behind you), put the level car in neutral, and watch — flummoxed, if you’re like me — as the car begins to steadily move back up the hill of its own accord. An optical illusion? No. There is definitely a hill there! A gravitational vortex? No clue. Magnetism? Something phantasmagoric? Try it? You’ll get a ticket these days. “The State Of New Jersey prohibits any vehicle from backing up on  an off-ramp,” a police officer told one inquring reporter attempting to test the local legend.

Oh, this world of wonders — and mysteries! Only with God can we discern.

Those seeking more concrete evidence of the spectral nature of the phenomenon will often sprinkle flour or baby powder on their car’s bumpers, it seems — according to Weird New Jersey. “Then, after the anti-gravity experiment, they check their bumpers for signs of ghostly handprints in the powder…”

Elsewhere in the same state is the legend of Franklin Lakes’ Gravity Road, where a young woman was killed at the intersection at the bottom of the off-ramp. When one comes to a halt at the stop sign after exiting the highway and puts a car in neutral, a mysterious force pushes it back up a hill there — supposedly the ghost of a woman warning you of a danger she succumbed to.

There are other such places in the state.

In Jackson is a hill near a house that — it’s said — was a living nightmare for a little girl.  She and her dad lived alone, and during a period of time rented a room to a stranger.  One day the girl came home from school, it’s said, and the stranger took her downstairs to the basement — torturing her until the father came home from work.  When dad heard noises in the basement, he descended only to be brutally murdered. If you believe the legends, your car gets pulled upwards due to a father trying to protect his daughter from any harm and getting you as far from his home as possible.

(The house is now empty, but that doesn’t prevent passersby from reporting a light in the basement…)

There are strange “anti-gravitational” reports in twenty-seven states and five Canadian provinces — not to mention thirty-three other nations. Here’s one list. We advise praying as one passes by such spots, not lingering, in the event it is a spiritual darkness.

Scientists tell us that the embankment is sloped at such mystery hills in a way that gives the effect of going uphill, when really the mind is misperceiving what the eye is sending it, due simply to the way the horizon obscures how the hill slopes, in relation to the rest of the surroundings.

Many such places are tourist traps. In some cases, houses have been built on a slant such that tourists roll a ball on the floor and it seems to go “uphill.” It’s an optical illusion. Though almost imperceptibly, the entire house is slanted. Even trees outside are planted at an angle, to deceive the poor bedraggled (but paying) travelers.

Weirdest may be in Gold Hill, Oregon, where a former mining office is said to sit upon a power spot that connects all the vortices in the universe and is most powerful when the moon is full.

Not a modest a claim… Be pretty skeptical.

Yet it’s undeniable that at some of these, a car will behave awfully strangely. Is there magnetic lodestone just beneath the asphalt? Or an aberration in gravitational pull (since science doesn’t even understand what gravity actually is)? Of this one is sure: oddities occur aplenty in nature. For example, a family in Marion, Ohio, called the Merchants marked the grave of a family patriarch Charles, who had made a fortune in the locomotive industry, with a stone plinth and a huge granite ball on top of it. Proudly, they had it stained and polished to a fine shine, but for a rough spot where, out of obvious necessity, the ball, which weighed more than two tons, touched the plinth.

All well and good, except that within a few years, it was discovered that the ball was spinning. This was clear because the rough spot underneath was now… visible.

Who or what could manipulate a stone spheroid weighing five thousand pounds?

Oh, of course, a graveyard! 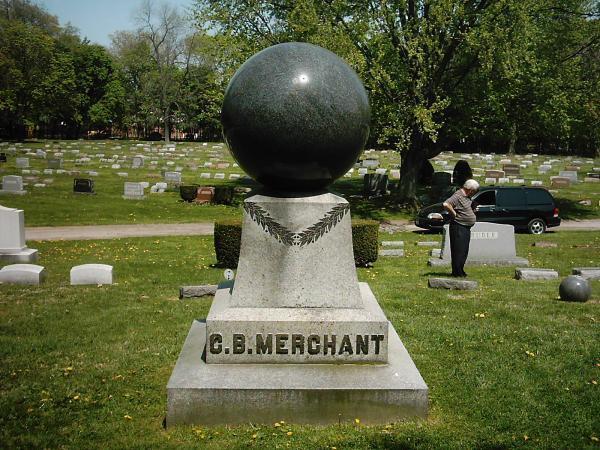 Unhappy with that turn of events, the family had a crane hoist the monument and return it to its original orientation.

That was in 1898. The top of the ball was even secured with a dollop of tar. But to no avail. The ball continued to spin — and does to this day, with no one sure quite why (though science will doubtless offer mundane explanations, or try to). Is it from an imperceptible vibration, or something a bit spookier?

“No matter the cause,” says an observer, “the Merchant ball rolls on.”