It was so predictable that it was predicted, including here, when, a few weeks ago, commenting on an upcoming government report about UFOs spotted by Navy pilots, we noted that the government would “never get to the bottom of it because there is no bottom.”

When they are not drones or simple cases of mistaken identity, unidentified flying objects tend to be spiritual phenomena. The Navy sightings are included in our book, Lying Wonders, Strangest Things.

The report does not rule out extraterrestrials. Nor does it say they were drones. Still, the objects spotted by the pilots off California and Florida are probably Russian and Chinese drones (or something the U.S. is developing beyond the classified standing of both the pilots and those investigating what they saw). Those nations have more advanced hypersonic drones (although no one knows what is being developed at places such as Area 51). 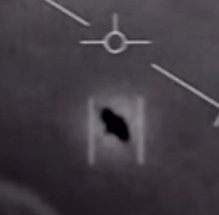 Let us note that there are far more impressive UFO cases than the Navy one, which has drawn all the attention due to newspaper publicity. We’ll be having a “special report” in the near future on alleged crashes around the globe.

For now, in reporting on Friday’s release of the intelligence report, The New York Times, which broke the Navy story several years back, puts it this way:

“American intelligence officials have found no evidence that aerial phenomena witnessed by Navy pilots in recent years are alien spacecraft, but they still cannot explain the unusual movements that have mystified scientists and the military, according to senior administration officials briefed on the findings of a highly anticipated government report.

“The report determines that a vast majority of more than 120 incidents over the past two decades did not originate from any American military or other advanced U.S. government technology, the officials said. That determination would appear to eliminate the possibility that Navy pilots who reported seeing unexplained aircraft might have encountered programs the government meant to keep secret.

“But that is about the only conclusive finding in the classified intelligence report, the officials said. And while a forthcoming unclassified version, expected to be released to Congress by June 25, will present few other firm conclusions, senior officials briefed on the intelligence conceded that the very ambiguity of the findings meant the government could not definitively rule out theories that the phenomena observed by military pilots might be alien spacecraft.”