We have been discussing “coincidence.” And in this regard, the news site MSN notes some prime examples.

Take the case, in February 1973, of a man named Dr. Bernard Beitman, who suddenly and inexplicably found himself hunched over a kitchen sink in an old Victorian house (this in San Francisco), choking uncontrollably.

“He wasn’t eating or drinking so there was nothing to cough up, and yet for several minutes he couldn’t catch his breath or swallow,” says the news site. “The next day his brother called to tell him that 3,000 miles away, in Wilmington, Del., their father had died. He had bled into his throat, choking on his own blood at the same time as Beitman’s mysterious episode.”

Mysterious are the ways of the Holy Spirit.

Really, the question — posed here the other day, and occasionally through the years — is whether there really is such a thing as “coincidence.”

Perhaps with some minor things. But when there is meaning?

Many call such happenings “Godincidences.”

Call it what you will. Einstein is often cited for the quote, “God does not play dice.”

It turns out Einstein was using that as a metaphor. In explaining the quote, the scientist, in a 1945 letter,  said, “God tirelessly plays dice under laws which he has himself prescribed.” He also said elsewhere he did not believe in a “personal God.”

Einstein was a bit off in some of his theories — and very off about that “personal” aspect (God is not just a cosmic energy) — but bringing God into the equation, when it comes to “coincidence,” is important. For He has His hand in everything (though the enemy creates coincidences of his own — always to a bad end).

According to MSN, Beitman, who has written a book about such experiences, defines a coincidence as “‘two events coming together with apparently no causal explanation.’ They can be life-changing, like his experience with his father, or comforting, such as when a loved one’s favorite song comes on the radio just when you are missing them most.”

Some can be rationalized.

How far will physicists, mathematicians, and statisticians go in trying to explain the… unexplainable?

Case in point [from Lying Wonders, Strangest Things]: Irv Kupcinet, a famous newspaper columnist and television talk-show host in Chicago. I did his show back in the 1980s. Many years before, when he was a reporter, Irv took a trip to London, covering the coronation of Queen Elizabeth II. He was staying at a luxurious hotel, the Savoy, when, in the bedside table, he found several items, all with the name “Harry Hannin” on them. That was strange enough: Kupcinet knew a Harry Hannin who starred with the Harlem Globetrotters. Was it the same one? When Irv called Hannin to ask if he had stayed there recently, the answer was yes, but before he could tell the basketball player about the items, Harry interrupted, no doubt with excitement: for, as he quickly explained, he had been in another hotel, the Le Meurice, two days before, and found a tie in his room. The name on it: Irv Kupcinet.

It can get very wild.  In Detroit was the baby that fell and miraculously hit a fellow passing by precisely below, breaking its fall.

A year later, for the second time, the baby fell — and was caught by the same man, passing by at that exact moment, again. This is not urban myth. It was in newspapers.

There was Mark Twain… born the year of Halley’s Comet and dying the year of its return (and predicting this!).

There were John Adams and Thomas Jefferson, two signers of the Declaration of Independence: both dying on July Fourth, of the same year.

There was Anthony Hopkins… When this British actor was chosen to play the lead in a movie based on the novel, The Girl from Petrovka, by George Feifer, he tried a number of bookstores in search of a copy but could find none. In London’s Leicaster, Square, waiting for a ride home, he noticed a book someone had left on a bench.

Remarkably, it was The Girl from Petrovka.

If that wasn’t enough, two years later, filming in Vienna, and meeting with Feifer, the author lamented that he had no copy of his own book: he had lent the last one, with notes scribbled in the margins, to a friend in London who had lost it. Whereupon Hopkins produced the book he had found… complete with annotations!

What cosmic force puts these things together? They call it “synchronicity,” but that impressive scientific appellation tells us little…

There was the case of an evangelist from the state of Washington who was walking down a street in Dayton, Ohio, looking to buy a Pepsi in this city he had not previously visited when a payphone he was passing suddenly began to jangle insistently at that very moment. At first startled, he picked it up, only to hear an operator announce that it was a person-to-person call — for a person by his name! He thought it was Candid Camera. It wasn’t — the operator was putting through a call from an emotionally distraught woman who had once seen him on TV and was contemplating suicide. She had been desperately praying to find him and said the phone number… flashed into her mind in a vision. “What are the odds of that?” he asked. “A billion to one?”

Perhaps a bit more than that.

Just the other day, a drunken man stealing a statue of Saint Michael at a church in Monterey, Mexico, stumbled and fell on the angel’s sword.

There are the baseball players.

The New York Post reports, “Two Minor League Baseball pitchers with the exact same name — and eerily similar looks — took a DNA test to find out if they’re actually related after years of being confused for one another.

“Brady Feigl, 32, who is a player for the Long Island Ducks, looks nearly identical to the other Brady Feigl, 27, who plays for the Las Vegas Aviators. The pair both measure up at 6 feet, four inches tall, have fiery red hair, and wear glasses. In 2015, the doppelgängers were first mistaken for one another when they both had the exact same elbow surgery performed by the same doctor, named Dr. James Andrews.”

Yet, they are not biological relatives! 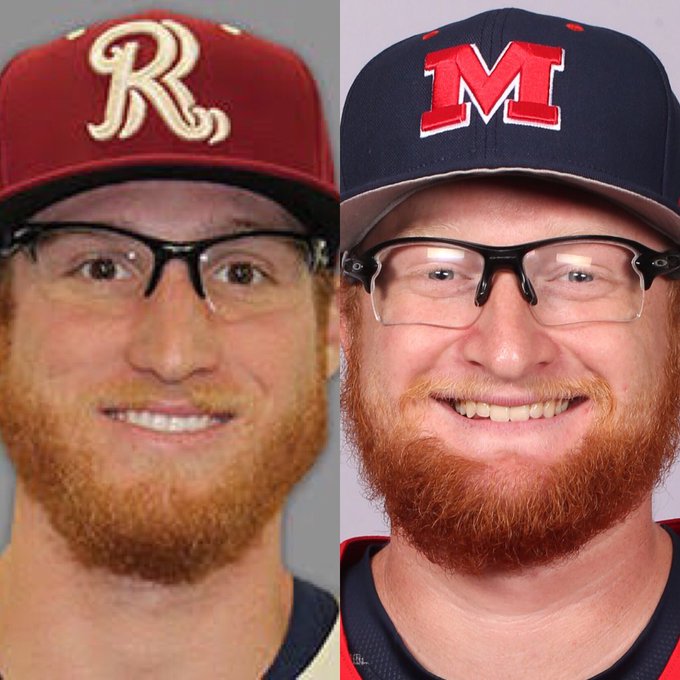 We report. You fathom.