Are there such things as “sleep demons”?

There are demons night and day, in this world, while traversing the trial called life.

When we die, we’ll see the spiritual reality through which we slogged and strived.

It is while asleep that, without prayer, we can be most vulnerable, whether during dreams (nightmares) or actual physical attack.

The latter, for some, can come by way of physical manifestations, particularly trouble breathing. The Greek term pneuma means breath, wind, or spirit and is the root of “pneumonia,” notes a theologian, as well as theological words related to the Holy Spirit (such as “pneumatology”). There are those who are actually paralyzed.

“What is this ‘demon’ that leaves you trapped in your body, unable to move or scream?” asks Healthline. “It depends who you ask. For some it’s a faceless, shapeless presence trying to suffocate them. Others describe it as a creepy old hag with claws. Some see an alien and experience what they believe is a full alien abduction. And for others, the demons look like a dead relative. Different cultures have different explanations for sleep paralysis demons. Canadian Inuit attribute the sleep paralysis to spells of shamans. Japanese folklore says it’s a vengeful spirit that suffocates its enemies in their sleep. In Brazilian folklore, the demon has a name — Pisadeira, which is Portuguese for ‘she who steps.’ She’s a crone with long fingernails who lurks on rooftops in the night, then walks on the chest of people who sleep belly up on a full stomach.”

Psychologists call it a hypnagogic or hypnopompic hallucination. And they’re entitled to their discernment. Exorcists know this can be a very real oppression — waking up to a menacing presence, one that in extreme cases causes the sensation of paralysis (if so, simply blurt out the Name “Jesus!”).

Notes Discover Magazine, “Sleep paralysis is distinct from nightmares, but the two do share an etymology. The Old English word mare denoted an oppressive spirit (tormenting women in male form as the incubus, and men in female form as the succubus) that sat upon the chests of sleepers, hence the suffocation. Researchers now believe the mare was inspired by sleep paralysis. The connection is clear in Henry Fuseli’s 18th-century painting, The Nightmare, where a goblinesque figure crouches atop a woman’s sprawled, inert body.”

Maybe those artists and folklorists of old had as much insight as the psychology of today. 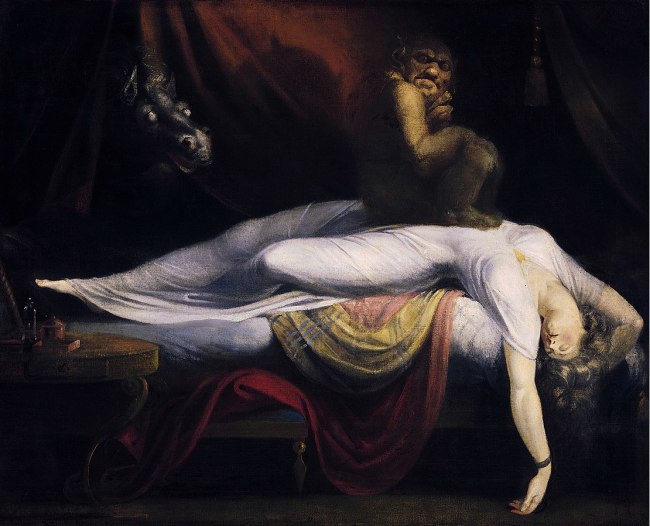 “Given its ghastly symptoms,” says Discover, “it’s understandable how our ancestors might attribute sleep paralysis to demonic forces. But sleep scientists have concluded that it’s actually a normal part of the sleep cycle that sometimes, abnormally, occurs in the semi-conscious moments before and after sleep. Some have referred to it as a mixed state of consciousness. A bout usually lasts seconds or minutes but can persist for longer.”

Here’s a list of the cultures reporting the affliction (hint: virtually all of them).

And the demonology? Nightmares?

Says a Spanish exorcist, José Antonio Fortea, when asked if spirit cause bad dreams, “Yes, even though there is no way of knowing when a nightmare has a natural cause or a demonic one. We can only suspect that it has a demonic cause when there are other indications that point to this. There are cases where no psychiatrist has been able to find a reasonable explanation, either conscious or subconscious, for a normal person to suffer every night for a month or more with terrible nightmares that 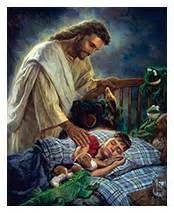 cause him or her to awake screaming and covered in sweat. These periods of very intense nightmares are sometimes connected to things such as having taken part in an occult rite or having begun a more intense spiritual life. The best advice one can give someone in this situation is to use holy water and ask God for protection and deliverance from any demonic influence during the night before he goes to sleep. If such actions cause the nightmares to stop, this would confirm that they were demonic in origin.”

There you have it.

How about in the bedroom every night before sleep?

Prevention, after all, is the best medicine.