The recent canonization of Saint Kateri Tekakwitha, and her feast day this week, brings to the fore the issue of Native Americans and their many spiritual elements.

Across North America are various signs of those influences.

On one side, Indians were extremely spiritual — and believed in a single Creator. That’s something crucial that Christians hold in common with them. They also treated God’s Creation with great respect — taming it when they had to but not reshaping it or misusing it; careful not to upset the balance of animals and plant populations. Basically, they blended with what God had provided, and left a small “footprint.”

But the same was not always true spiritually. While worshipping the Great Spirit in the Sky, they also fell into the trap of paganism — developing a multitude of “gods” and spirits that oversaw various natural elements (earth, fire, wind, rain). That is decidedly not Christian and shares more in common with occult practices (Druidic ones which later evolved into witchcraft).

Those who are spiritually sensitive have long identified old Indian burial grounds (and mounds) as places where there can be a dark spiritual dynamic. The reasons can be drawn from several perceptions, particularly that Native Americans conducted pagan-style rituals at such spots: pagan rituals draw the wrong spirits. This has been seen across the U.S., Canada, South America, and Mexico (where there were Aztec blood rituals).

In the region of Auriesville, New York (near Albany) — where Kateri spent so much time, and which was old Mohawk territory — it is noted at the shrine commemorating her and three missionary saints that when these saints (Isaac Jogues, René Goupil, and John Lalande) first arrived there was spiritual warfare. They were after all martyrs — killed by the natives.

“How often on the stately trees of the forests did I carve the most sacred name of Jesus, so that, seeing it, the demons might fly, who tremble when they hear it!” said Saint Jogues in 1643. “How often, too, did I strip off the bark to form the most Holy Cross of the Lord, so that the foe might fly before it; and that by it, Thou, O Lord, my King, ‘might reign in the midst of thy enemies’ (Psalms 109:2), the enemies of thy Cross (Philippians 3:18), the misbeliever and the pagan who dwell in that land, and the demons who rule so fearfully there!” 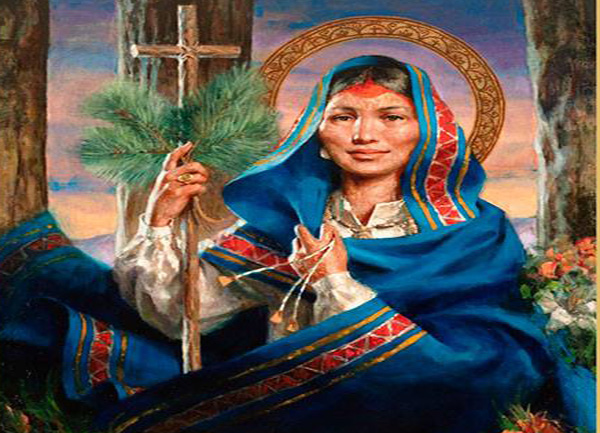 It is intriguing that Indian strongholds in that state later gave rise — in the same general vicinity — to the foundation of Spiritualism, feminism, American Freemasonry, and Mormonism near Rochester (it was an Indian “spirit” who told the Spiritualists to build a second camp in Florida).

And so there is that element. But what a chance now to clean and clear  things in Upstate New York, as well as elsewhere: by invoking this wonderful, self-sacrificing, and heroic new saint (along with the three others) by spreading her image far and wide and sending her prayer card to those on local reservations. What common holiness we should share with her!

The fourth Native American saint in North America (when one counts Juan Diego and two other Mexican saints; first in the U.S.), Tekakwitha was said to have put thorns on her sleeping mat and lie on them while praying for the conversion and forgiveness of her kinsmen.

She had a strong message of faithfulness, despite ailments and persecution. She and the saints who are also commemorated at Auriesville knew full well the power of the Name of Jesus!

(Let all the saints come marching in!)

As for her lesson to the “white man”: the Vatican has made her patron saint of proper stewardship of the environment — not the ecology of radicals, but the Christian environmentalism that preserves what God Himself so intricately created.

Let us pray. Catherine Tekakwitha who made her mother the Immaculate Mary, Mother of God, and has given herself as the spouse to Christ. Catherine Tekakwitha lead us on the road to Heaven and without ever abandoning us during this travel, as God the Father had guided you in your voyage without ever abandoning you. Through you with your eternal spouse, Jesus Christ. Amen.

Visit our bookstore for more products and specials; Click here