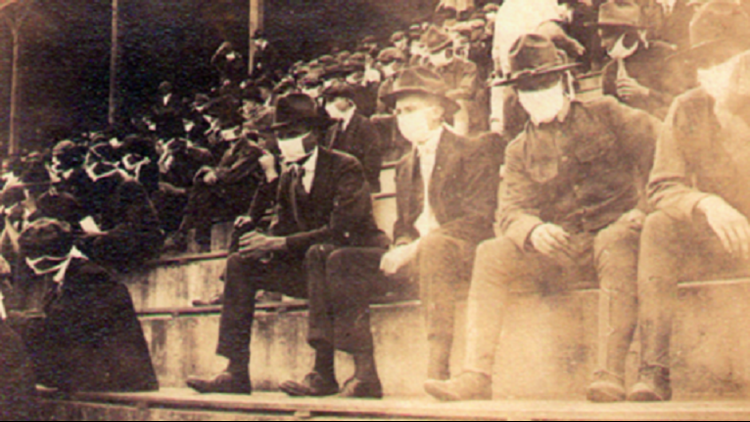 There are some matters that cry out for perspective. There are questions. Some of them: is mandating the wearing of masks a new thing that threatens liberty? And what about government closing churches? Isn’t that a step toward anti-Christian authoritarianism?

We’re always sharply on the lookout for that. And in many ways, the world is headed in that direction. This cannot be forgotten. Look at all the statue vandalism. Look at what they have taken away.

At the same time, we also look to place matters into context.

Masking is not a new debate; it was a controversy, a tussle, a century ago. Notes a news report:

“During the 1918-1919 influenza pandemic, some Americans were not fans of wearing masks. They risked hefty fines by refusing to wear them and sometimes ended up in jail. In one case in San Francisco, an organized group called the ‘Anti-Mask League’ held a protest in a local ballroom that was attended by about 2,000 people in January 1919. The ‘Anti-Mask League’ protest in San Francisco ‘was an orderly protest compared to people fighting in Walmarts today,’ said Dr. Howard Markel, a medical historian and a physician who leads the Center for the History of Medicine at the University of Michigan. In 1918, ‘lots of people grumbled about wearing masks, or even refused to do so, but they weren’t doing so because of a political stance or partisan allegiance,’ said Alexander Navarro, assistant director of the Center for the History of Medicine at the University of Michigan. With the country at war, wearing masks was seen as patriotic, and ‘mask slackers’ were often shamed in public service announcements and news headlines for their defiance.”

Ended up in jail?

In mid-October, 1918, amidst a raging epidemic in the Northeast and rapidly growing outbreaks nationwide, notes Discover Magazine, “the United States Public Health Service circulated leaflets recommending that all citizens wear a mask.” (Photo above, a Georgia Tech game in 1918.)

Meanwhile, back during that pandemic, churches were also ordered closed. Below is the headline from a newspaper in Birmingham. Said the article, “On Monday, Oct. 7, 1918, Alabama Governor Charles Henderson ordered the closing of schools, churches and theaters to avoid the spread of the Spanish influenza.” 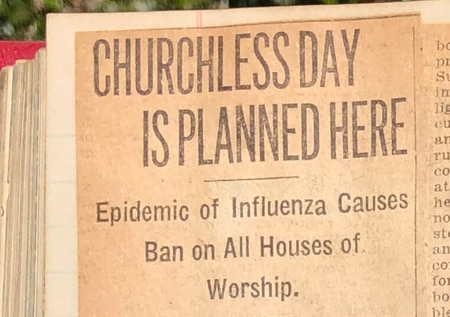 Nothing new in that, it turns out. But back then, the newspaper, The Birmingham News, offered to print sermons, service outlines, scriptures, and announcements sent in by various clergy to help people worship at home! Not quite like today.

Then there’s looking at numbers. The 1918 flu — which killed two of the three Fàtima visionaries (though the contagion was not predicted in their “secrets”) — caused at least fifty million deaths worldwide and 675,000 in the U.S.

So quick calculations tell us that back then, the pandemic was slaying one of every 150 people.

So far, the corona pandemic has killed one of every 1,700 or so Americans, ten times less.

Again, always, and whatever way it cuts, it is interesting to place things in factual perspective.

Opinions are rampant these days; facts are scarce.

One priest back then wrote a newspaper column lamenting loss of the Mass but supporting church closures. His name was Father James E. Cuyle, and he was later shot to death on the porch of the rectory, though that was three years after his article and there was no overt link to his public stance. Wrote the priest: “You are for the first time in your lives deprived of the opportunity of hearing Mass on Sunday, and you will, I trust from this very circumstance, appreciate more thoroughly what Holy Mass is for the Catholics. Sunday service is no mere gathering for prayer, no coming to a temple to join in hymns of praise to the Maker, or to listen to the words of a spiritual guide, pointing out the means whereby men may walk in righteousness and go forward on the narrow way that leads to life eternal.

“No, there is something else that draws the Catholics, to the wonderment of non-Catholics, from their warm homes on cold bleak winter dawns to trample through snow-covered streets in their thousands and hundreds of thousands to a crowded church, where they kneel reverently absorbed in the contemplation of a man, who in a strange garb, at a lighted altar, genuflects and bows and performs strange actions and speaks in a long dead tongue. What draws the multitude?

“The Mass, the unutterable sweetness of the Mass. Nothing human could draw, but the Mass is the God-given sacrifice offered the Creator, it is Holy Thursday come down and Calvary made present today. Mass is God really and truly present on our Catholic altars, a living unbloody victim offered again for the sins of men, offered, too, in thanksgiving for all the wondrous graces that unceasing flow from God’s great mercy throne on high.” 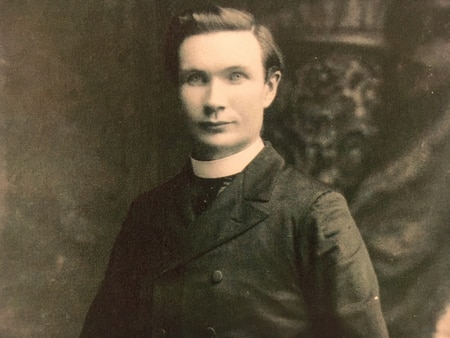 Speaking of prayer, it is urgent at this time to intercede for our youth. For, to present other numbers, a recent study found one of every four young adults aged 18 to 24 has considered suicide in just the past month out of frustration over the pandemic. Many are in the college bracket, including seniors who have found a dismal employment environment awaiting them, and others who simply are stressed and reporting high anxiety.

Going to college “online” has led to a sense of estrangement and isolation.

This cries out for national prayer intercession. Please pass this intention around your e-mail and social media contacts. Isn’t this more important than the often trivial political squabbling? Aren’t we called to help each other — and keep the Faith — to keep forging ahead toward Heaven and maintain Catholicism as more important than internecine debate?

The final perspective of the day: life on earth is a constant test. It always has been. It always will be. Persevere. It is a test of love. Squabbling defeats it. Struggles in the past dwarf those we now face (though that may change). All tests sent by God are good tests. Handled the right way, the pandemic weans us from the superficial economy that has consumed us (“consumed the consumers,” as it were). It is a test, but a good test. It gives us time to reflect (and place matters, especially in our lives, into perspective).

Listen to the actual voice of Saint Padre Pio on persevering.