Guadalupe plays a role, in both obvious and hidden ways. There is something that is specially compelling us to do this trip.

Incredible it is how many times the Blessed Mother’s image as presented at Guadalupe has been perceived on objects and buildings in recent times: windows, trees, even a highway overpass.

In the legitimate cases, when it isn’t an imaginative reach, what is she trying to tell us? Why is it so prevalent now? Is it simply the influx of Mexicans? Or is there more to it?

It’s things like that we will be delving into during our journey as well as in the book (appreciate your prayers). If we can swing it we also would like to investigate some current apparitions, sometime soon, in South America.

But getting back to Guadalupe: I’ve only been there once before and that was as a lone pilgrim in the early 1990s. What a memory of it I have.

Incredible it is how one can attend Masses throughout the day at the basilica in different languages and between liturgies pray before that image towering from the wall before you, allowing the prayers to flow with supernatural ease in this unquestionably authentic place (winning the highest approval in the Church in the way of papal visits, most recently John Paul II and Francis, who requested private time before the image).

That image continues to perplex, mystify, and fascinate. Many are unfamiliar with the inexplicable silhouettes in Mary’s eyes (matching descriptions of Juan Diego and the bishop to whom he showed the tilma), and also that the apparition healed Juan’s uncle, who was on his deathbed.

There is hidden symbolism and a hidden history. (For example, the incredible connection between Guadalupe in Mexico and one with the same name two centuries before — another apparition — in Spain.)

It had a role in halting a tremendous plague.

There are so many reasons why the image in Mexico is inexplicable by mere science that it’s daunting to summarize, and so we won’t here, but for a few interesting tidbits.

As scientist Jody Brant Smith has noted, the image seems to change color depending on how far or close one is to it and reflects light not like a photo or painting but from a “strange effect” that is “caused by the diffraction of light from the surface.”

Beyond six or seven feet, the skin tone is olive-green or gray-green. It continues to vary with distance, as if alive.

Noted another scientist — who has studied the iridescence on bird feathers and insect scales — “somehow the gray and ‘caked’-looking white pigment of the face and hands combines with the rough surface to ‘collect’ light and diffract from afar the olive-skinned hue. 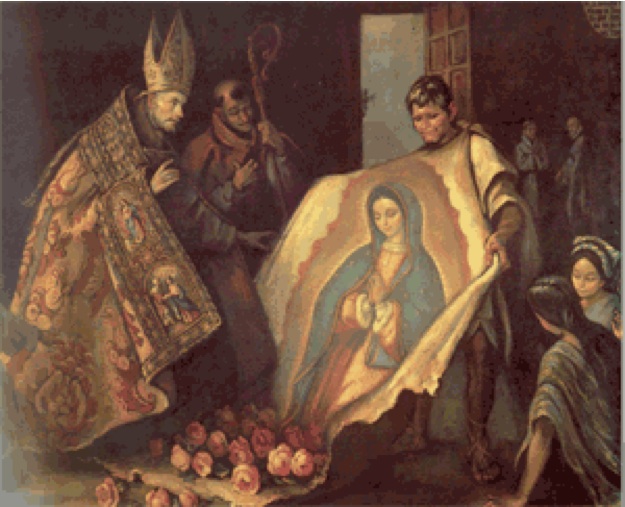 “Such a technique,” he added (in The Image of Guadalupe), “would seem to be impossible to accomplish by human hands; however, it occurs often in nature, in the coloring of bird feathers and butterfly scales, and on the electra of brightly-colored beetles.”

As Foster further notes, Queen Esther of Old Testament fame was described in the Jewish Talmud as having skin that was greenish, “like the skin of a myrtle.” Precisely can be said about the skin tone of the Guadalupe Madonna!

How the “painting” has maintained its integrity in the salty, acidic air of sprawling Mexico City is not something science can answer; there is no evidence of fading or cracking, as would happen with paint. It joins the Shroud of Turin as the two most mysterious images on earth.

Even the Guadalupe eyes are curved exactly the same way the human eye is curved. No artist could do or (back then) know that! The number of stars on her blue mantle are the same as the number of chromosomes in a human (forty-six).

And for the endless miracles connected with it?

Just one example, as we reported back in 2007, when we wrote: “An apparent communique from Dr. Jean-Pierre Dickes, president of the Association of Catholic Nurses and Doctors in France, reports what may have been an unusual luminosity in the famed image of Mary at the Shrine of Guadalupe in Mexico City immediately after that city legalized abortion.

The event is said to have occurred on April 24 — the day legislators okay-ed termination of the unborn up to twelve weeks.

At the end of the Mass, which was offered for the aborted children, the assistant of the Basilica was asking herself what the Most Holy Virgin of Guadalupe was demanding of her,” reported Father Luis Matos, superior of  La Communaute des Beatitudes.

“While many of the faithful were taking photographs of the [tilma] of Tepeyac, exposed and venerated in the Basilica and at the foot of which the crowd of pilgrims filed past on a moving carpet, the image of the Virgin began to erase itself, to give place to an intense light which emanated from her abdomen, constituting a brilliant halo having the form of an embryo.

With a centering and an important enlargement it is possible to appreciate the position of the light which truly comes from the stomach of the Holy Virgin and is not a reflection, nor an artifact.”

We offered it for discernment. Such a light had been seen on a previous occasion. Our headline: “Strange Light Claimed In Guadalupe Image After Mexico City Okay-ed Abortion.”

“An engineer, Luis Girault, who has studied the picture thus produced, has confirmed the authenticity of the negative, and has been able to specify that it had not been either modified nor altered, by superimposition of another image for example,” stated Dr. Dickes.

“He discovered that the image (the picture produced) does not come from any reflection, but literally comes from the inside of the image of the Virgin.

“This light is encircled with a halo and appears to float inside the abdomen of the Virgin. This halo has the form and measurements of an embryo.

In effect if we again examine more precisely this picture by making it turn in a sagittal plan, we perceive inside the halo some areas of shade that have the characteristics of a human embryo in the maternal womb.”

The image — responsible for the conversion of twelve million Indians — is now largely used as a symbol of “pro-life” causes in the Americas because Mary appears pregnant in it. Our little prophecy: its role in America is about to become greatly pronounced. Can’t wait to return there!

Learn more about our pilgrimage here :