Is it any wonder that a flurry of apparitions, warning about evil and what was about to transpire, were claimed at grottos in Ireland in the 1990s? These were detailed in The Final Hour. [Photo above, Ballinspittle, from Tripadvisor]

At the time, Ireland was among the most Catholic of nations — known for decades as a wellspring of missionaries. In 1973, more than ninety percent of Irish Catholics attended weekly Mass, a figure that has dropped to forty percent. “The Catholic Church in Ireland is an endangered species if recent trends are to be believed,” noted a newspaper.

The number of seminarians at one famous such school, St. Patrick’s College Maynooth, is the lowest — at seven — since 1795. The land of Knock!

Critically, Ireland — once a pro-life stronghold — is about to hold a referendum on legalizing something no one ever thought would plague the Emerald Isle: abortion. This in a nation where a statue of Mary is allowed at a public airport and at the entrances to many town! This in a nation that had been responsible for more vocations than anywhere save Italy and now the Philippines and parts of Africa.

Prayer urgenies here. Is it any wonder that the Pope is hurrying to visit soon? 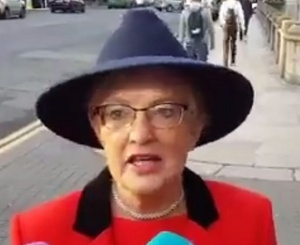 Few things show the descent so markedly as Katherine Zappone [left], a leading Irish official who is both pro-abortion and a lesbian (listed in biographies as having a “wife”). Are there even darker undertones? As distraught viewer Pat Mullin from Ireland writes:

“Currently, there is a circular doing the rounds in Ireland, about Ms. Zappone, Minister for Children in the present Irish Government, that she is a practicing witch, having written a book on the subject The Hope for Wholeness: a Spirituality for Feminists, in which she praises the practice of witchcraft , ‘I have participated in rituals facilitated by Starhawk [an American witch], where we celebrated the presence of Earth, Fire and water in our own lives,’ she writes, or ‘in journeying with other feminists, I have found  that the sacred stories of Goddess reflects my imagination in ways the Jesus story never will.’ And she also uses other quotations from Starhawk’s books.

“The media here are aware of her involvement with witchcraft, but choose to remain silent on it. It has appeared on Twitter and Broadsheet.ie but generated no traction. I am sure that if the parents of school going children became aware of her involvement  with this occult practice, it would have a serious effect on the outcome of the referendum on abortion, which is being held on 25th of this month.

“As you know, witchcraft is the  nefarious blood sister of  Satanism. There is a huge war going on in Ireland between good and evil. The pro-abortionists appear to have the lead at the moment. There is a lot of prayer and fasting being done also but anything you could do the highlight the practice of witchcraft in our country and the involvement of a government minister in it would be a great help. It should also swing any  people who are uncertain how to vote over to the ‘No’ side. The circular in question is printed by childinthewomb.com.”

Remarkably, Zappone was educated at “Catholic” Boston College (PhD) and The Catholic University of America. Originally from Seattle, she became an Irish citizen in 1995 — America’s own version of a missionary.

And so: prayer urgency. We can’t lose Ireland. Pray for people like Ms. Zappone and “Starhawk” (who has even counseled priests).

[Place a petition at Knock]   [Novena]