In the annals of miraculous healing, perhaps none stands out like what happened to a poor blind girl  from Palermo, Italy, named Anna Maria Gemma DiGiorgio.

“I had no pupils in my eyes,” recounted Gemma in 1971. “I had no sight at all. When I was three months old, my mother took me to a very famous eye doctor in Palermo. He told her that, without pupils, I  ould never be able to see.”

Some claimed she may have had pupils, but that her birth defect was so severe they were not recognized as such. In looking at photos, I couldn’t tell either way. 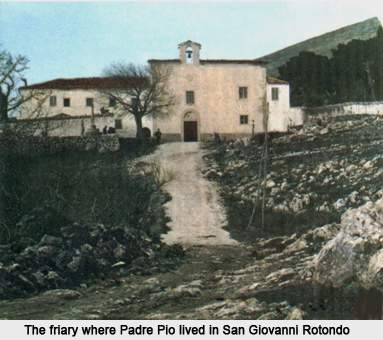 Whatever—in 1946, when the girl was seven, a nun took it upon herself to write the famous stigmatic priest Padre Pio on Anna’s behalf and received a note saying she should be brought to Padre Pio in San Giovanni Rotundo. I’ve been there. This is rather barren territory. A damp cold in the autumn and winter—austere like the monk was austere.

Many thousands sought his counsel or healing effects.

That’s exactly what Gemma’s grandmother did: brought the girl to see the famous Capuchin, who heard the child’s first Confession and gave her Communion—then made the sign of the Cross on her eyes.

After the visit, Gemma was able to see. It’s a fact that’s beyond question, confirmed by amazed doctors.

Did she really lack pupils? Or was her entire eye one large pupil (making it seem that way)? We know only that there was a severe defect and that although the physical defect remained unchanged, afterward Gemma was able to see normally.

More astounding still may be the thoroughly-documented cure of a construction worker named Giovanni Savino, severely injured on February 15, 1949, in a dynamite mishap while preparing to blast a boulder for a friary annex.

It was Giovanni’s routine to head for church each morning before setting off for work, and afterward,  like many others, he would wait outside of the sacristy for the holy man’s blessing.

This day, when Giovanni asked for his anointing, Pio gave the workman a warm hug and said only, “Courage! I am praying to the Lord that you will not die.”

One can imagine Giovanni’s upset. Pio was known as a prophet, one who usually was, if we can excuse the expression, dead-on.

Giovanni was petrified. “Padre Pio, what is going to happen to me?” he asked, in dread and earnest.

And Giovanni reacted with the same fright and stupefaction. When the same ominous words were uttered on the fourth day, the worker had had enough and wondered aloud if they should call off work for the time being. The crew, however, intent on its work, went ahead leveling the earth for the addition. 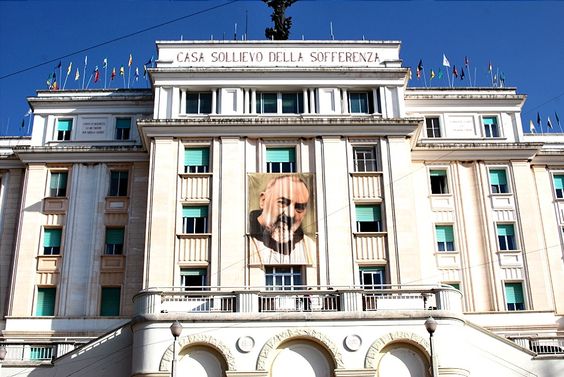 That afternoon, Giovanni and his partner placed a charge of dynamite under a boulder, lit the fuse, and then waited as it failed to detonate. What was wrong? After a short while, they went to find out, checking the charge— which blew up in Giovanni’s face.

The workman was in a bad way. A shower of rocks had felled him—embedded in his flesh. His face was scorched— much of his facial skin torn off. Most relevantly: where once there had been a right eye, there was now a pulpy mess. Dr. Guglielmo Sanguinetti, a physician, and Padre Raffaele, another Capuchin, as well as a Father Dominic Meyer, rushed to the injured man’s side. All three noted that among Savino’s numerous injuries, his right eye was entirely gone.

On this they concurred: the socket was empty. Other doctors confirmed the eye had been annihilated and Giovanni’s other badly damaged.

Informed of the terrible event—that the devout Christian laborer, so diligent, and prayerful, had been robbed of his sight—Pio digested the news of blindness and replied succinctly and cryptically, “That is not for certain yet.”

It was three days before the workman came to, his head and face swathed in bandages. Who knows what went through his mind as he lay, pondering a dark future! Nurses tended to him. One dismal day segued into the next. A tragic episode.

On the evening of his tenth day in the hospital, the blinded laborer was praying the Rosary when he smelled what he later called “the aroma of paradise,” a gorgeous, heavenly smell, as if someone with perfume or cologne was standing next to his bed. He felt, with a sixth sense, that it was Pio standing next to him.

“Give me back my sight, Padre Pio, or let me die!” pleaded Savino. “I cannot live like this!”

A week later, on February 25, 1949, at about one a.m., Savino felt a slap on the right side of his face—the side where the eye had been. “I asked, ‘Who touched me?’” testified the injured workman. “There was nobody. But again I smelled the aroma. It was beautiful.”

When later his ophthalmologist—an atheist—came to examine the remaining eye—shock. “To their amazement,” writes a biographer, “the doctors found that his shattered face was fully healed and covered with new skin.”

But what most amazed and elated Savino was the fact that he . . . had regained his vision. “I can see you!” he shouted to the specialist.

And indeed, as is medically documented, to his “utter astonishment,” the doctor saw that Savino had his right eye back.

He wasn’t seeing out of the badly damaged one—rather the one that had been turned to a bloody gel yet somehow was reconstituted. It left the doctors no doubt they had witnessed a miracle, according to a Protestant writer, Bernard Ruffin, who reviewed all the records.

Once released from the hospital, Giovanni naturally beat a path to the friary to thank Padre Pio. The mysterious monk, who fasted constantly, and often suffered for the infirm, said just, “If only you knew what this cost me!”

It’s tremendous to hear about those healed of diabetes or arthritis or even cancer leaving a person.

For a missing part of the body to be restored is another matter, entirely . . .