No matter who wins the election, a religious suppression is in the wind.

While conservative victories in certain states and a strongly Catholic U.S. Supreme Court will tend to stave off infringements on religious rights for the interim, a backlash against Christians for supporting the current Administration, plus the rise of Big Tech and “Generation Z,” spells a future during which there will be limits on free Christian and political speech, with negative mentions of such things as same-sex marriage and transgenderism more formally becoming “hate speech.”

This, of course, is dangerous.

And it is not to encourage animosity toward anyone.

But it brings to the fore — urgently — a question.

Will coming years see cyber giants, from Google to local internet providers, bar anyone who and anything that is against the legitimization of what Christians view as sin?

Consider Andrew Cuomo, who is spoken about as a potential future attorney general or even president: this former altar boy and now liberal governor has been openly hostile to Christianity in general and Catholicism in particular, passing the strongest pro-abortion legislation in the U.S., extending the statute of limitations so those abused by priests can dig decades further into the past (greatly damaging dioceses), and most recently attempting to shut down a Christian adoption agency for not allowing homosexual couples to adopt babies.

A federal judge stopped him from doing that.

But for how long will it be staved off? His autocratic style, including with pandemic restrictions, is alarming. The restrictions are needed, but the way they are being carried forth (with agencies tracking people in a very personal way), can extend to other things.

Like New York, will other states or the federal government codify abortion — making it a lawful right and thus rendering the debate over Roe moot?

Below (right) is the Democratic challenger in Texas for U.S. Senate. (At left, last of the Mohicans, is the incumbent.) 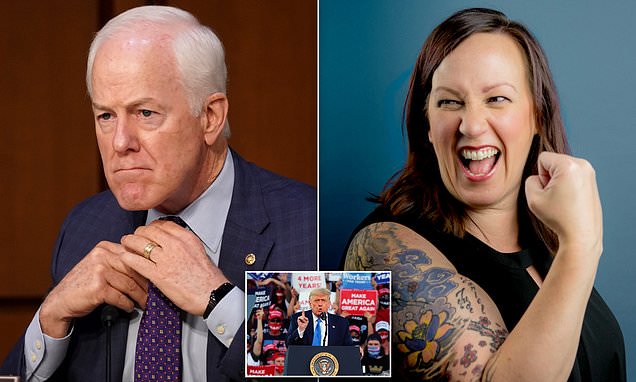 The toppling of religious — and, again, mainly Catholic — statues is another clear “sign of the times,” as are other forms of vandalism such as arson at places of worship, torching edifices that anyway, due to the abuse crisis and simple tedium, had fallen largely into desuetude. Just yesterday came the report of protesters in Chile burning down two Catholic churches in the capital [at top and below]. 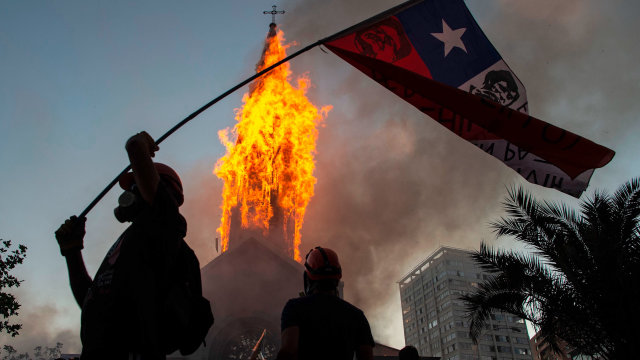 Question: why is it that social protests (over such matters as police violence) morph into anti-Catholicism, when the Church for decades has led the charge against racism?

Irrationality is a hallmark of the evil spirit. And when Christians choose anger, when they are strepitous, or racist, or cultic, they invite wrath. Vitriol attracts vitriol. The low road is a road to nowhere.

Most chilling is the recent survey that found one in four “Generation Z” young people (18 to 25) identifying as gay or semi-gay, and nearly half — 49 percent! — regarding themselves as agnostics or atheists. Every year, more and more millions enter the ranks of the voting public.

As it is, only forty-four percent of Americans think belief in God is crucial to good morals, and only twenty-two percent in Western Europe. When it comes to religion, in other words: who needs it?

Will open-Christian expression one day — in the lifetimes of our grandchildren, if not a bit before — be prohibited or at least greatly restricted? Might not social media plus news sites, internet service providers, and domain-name servers bar those deemed “haters”?

This would effectively negate free speech. And it is not implausible. Facebook and Twitter already are deciding what is true and what is not.

This just in (from the Christian Post): “Wikipedia has decided to restrict its editors from expressing opposition to same-sex marriage on its platform ­— a decision that comes months after co-founder Larry Sanger said the site’s neutrality policy was “dead.”

The vigorous prosecution of a man who exposed the horrendous marketing of fetal tissue and organs by those associated with Planned Parenthood is further cause for pause: It was directed, was this prosecution-persecution (in effect an attempt to jail him), by a current candidate for U.S. vice president.

This, though, isn’t about politics. It’s about persecution. Inevitable? Nothing bad is inevitable, with prayer (if it’s in His Will).

Yes, at the least a suppression.

Here and there, across the land, it is germinating and in some cases poised already to transform the lay of the land.