Do nations have angels? Is a country guided in the same way that we all have guardian angels? The answer is yes. We know this from both Scripture and private revelations. In the Book of Daniel it describes how good and evil angels battle over kingdoms, and we see similar imagery in the Book of Revelation. During the apparitions in 1917 at Fatima, Portugal, the children described an encounter with the Angel of Portugal. It is said that Michael is the guardian of Israel.

In a revelation from the U.S. we heard of angels over America.

These are the “Our Lady of America” (alleged) apparitions.

According to a saintly, now deceased nun from Fostoria, Ohio, named Mildred Mary Neuzil, there are at least two major angelic protectors of the United States, and she saw them in vision with great glory. One held a gigantic sword tipped with a “searing” flame. That was in his right hand. “In his left hand were held bolts of lightning that pierced all the environs of the universe,” said Sister Mildred. “On the right shoulder of this extraordinary being perched a pure, white dove. From the right shoulder down to the waist towards the left side was a sort of medium wide band on which was printed, `Power of God.’ At first the letters revealed themselves in black. Then when I recognized what the letters were they changed to such a color of gold light I could barely make them out.”

He had come, the angel told her — addressing her as “sister” — “to help the people of God in their hour of need.”

And so it was that America — this good nation, this nation founded on God, on liberty, on justice, this nation with the Lord in its very pledge — had become the focus of evil, said Sister Neuzil, had become the focus of attack by the enemy because it had the greatest capacity to lead mankind to God. It had fallen into sin. It had darkened. We don’t have to expound all the problems here (they are all around us).

But America is good and still has a chance and angels are on the scene and over us.

They have come with great might. They are empowered when we pray. They brighten when we are good. Sister Mildred saw this during a lifetime of apparitions, and while the later ones of angels were not included, earlier apparitions of the Virgin and St. Joseph were granted an imprimatur by her spiritual director, Archbisho 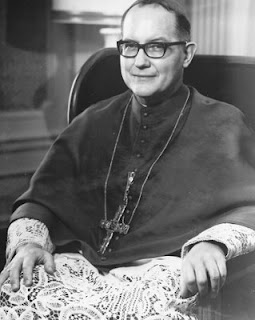 p Paul F. Leibold of Cincinnati, who struck a medal dedicated to her apparitions, which allegedly occurred from 1938 until her death in 2000 [see previous story]. “Follow me, people of God, brothers and sisters, as our Queen paves the way and the peace of the Lord will reign once more upon earth,” said the angel — while Sister Neuzil also saw a second one that looked very much like the first and also called itself “guardian and protector of America” but around its head had what looked like bright globes of light and in his left hand chains of enormous size and weight. In his right hand were what seemed like shafts of light. He also addressed her as “sister” and said, “With these shafts of light God seeks out and binds with eternal chains the evil powers and those who have sold themselves to these enemies of God and His people. They who are chained to habits of sin through weakness but have hearts filled with guilt and repentance will have their chains broken so that they will be free once more to love and serve the Maker.”

Sister Mildred said these blessed spirits seemed to be composed of light. “I could barely see any form. Their garments were of dazzling whiteness, their voices were not like any other ever heard, not audible except to the inner hearing which is indescribable. I was further informed that these two mighty Spirits would fight together side by side aided by an army of their companion Spirits.”

Said the second angel: “Listen to the words and warnings of the Queen of Heaven and you will experience my protection and I will fight in your defense that with the people of all nations you at last can come to the peace of the Kingdom which is within you.”

On his waistband were the words, “STRENGTH OF GOD.”

[resources: Our Lady of America Messages]